By 1899, W.E.B. Du Bois had accomplished more than most people could accomplish in several lifetimes. One bachelor’s degree from Fisk University, another from Harvard University. Graduate study at the University of Berlin. A pioneering dissertation on the abolition of the Transatlantic Slave Trade. The first Ph.D. earned by an African American at Harvard. Professional appointments at Wilberforce University and the University of Pennsylvania. Presentations at the American Negro Academy. Publications in the Atlantic Monthly. The list went on and on.

Now, as he taught at Atlanta University and put the finishing touches on his landmark sociological study, The Philadelphia Negro, Du Bois might have rested on his laurels. He did not. He could not while he lived in the belly of the beast–the heart of the Jim Crow South. Facing the “red monster of cruel oppression,” Du Bois would later write, “I faced the great Decision. What with all my dreaming, studying, and teaching was I going to do in this fierce fight?”

As Du Bois’s biographers have noted, that question became unavoidable on April 24, 1899. On that day, Du Bois walked along Mitchell Street towards downtown Atlanta. He carried a letter of introduction addressed to Joel Chandler Harris, an editor at the Atlanta Constitution. He also held a proposed editorial protesting the recent lynching of Sam Hose, a black farmhand accused of murdering his employer before raping the employer’s wife. Du Bois, familiar with the work of anti-lynching activist Ida B. Wells-Barnett, knew that the charges were false. He would expose the truth: that Hose killed his employer in self-defense and had not raped the wife. He would demonstrate through objective research that Hose’s only “crime” was being black in America. 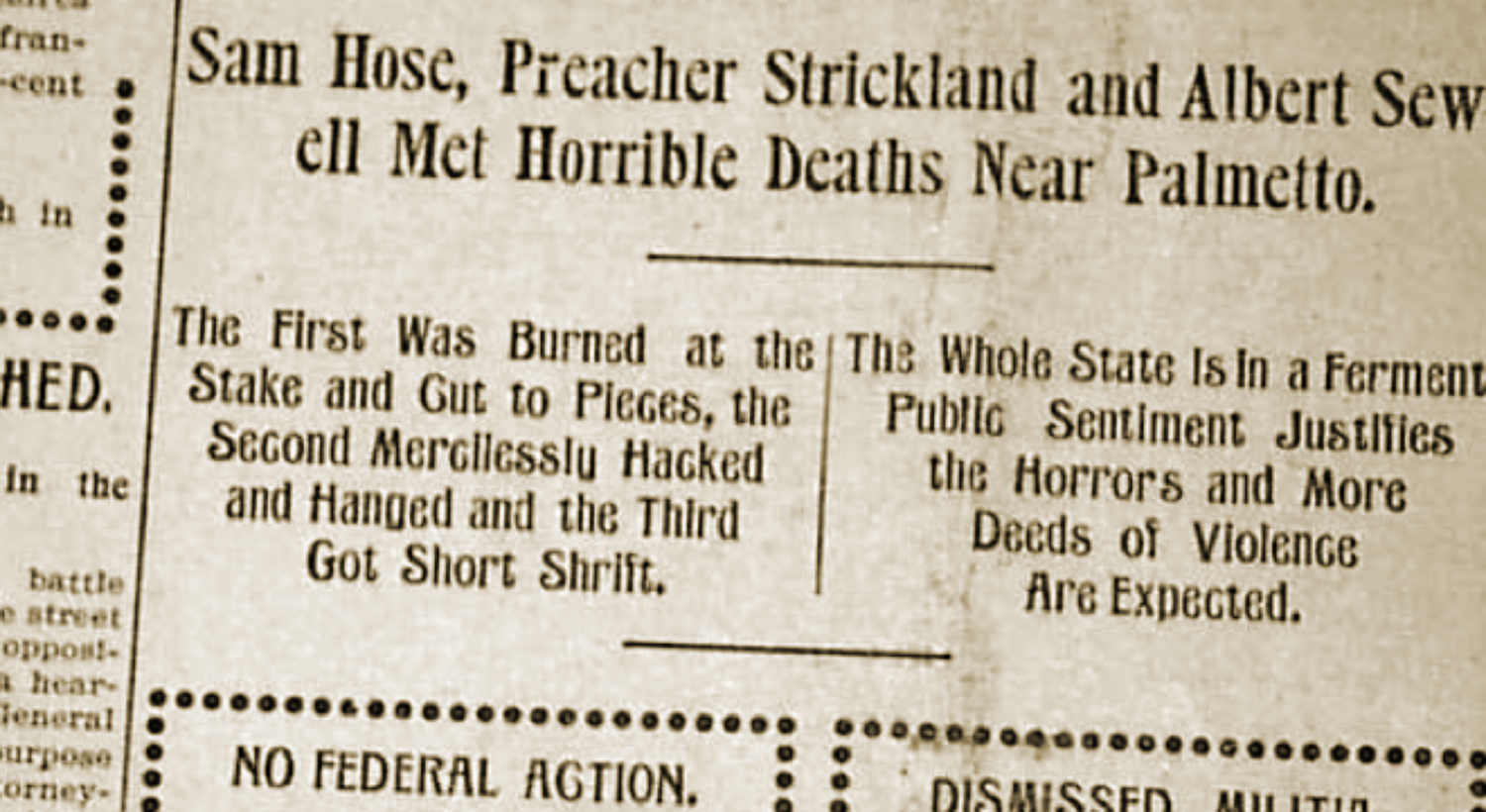 Of course, Du Bois did not make it to his destination. On his way, he learned that a lynch mob had burned Hose alive. His charred knuckles were on display—on sale—in a grocer’s window further along Mitchell Street. Du Bois was stunned. Numbed. “I turned back to the University,” he later recalled. Rather than continuing on his current course, Du Bois turned from his work, shaken by the realization that “one could not be a calm, cool, and detached scientist while Negroes were lynched, murdered and starved.”

Du Bois’s career proves Marable’s point: black scholars have always produced significant scholarship and advanced their academic disciplines even as they empowered their communities. But the account of his reaction to the lynching of Sam Hose also reveals the futilities of striving to meet “genuine standards of objectivity.” Du Bois, like other black intellectuals of his era, had long been motivated by the conviction that facts had intrinsic value. In his optimistic estimation, sound social science including his Philadelphia Negro would show that systemic racism was the clear cause of any problems attributed to African Americans. Racism would wither away in the face of knowledge. It had to. Though well-reasoned, those expectations proved to be misplaced. As Du Bois would admit in his autobiographical writings, it made no difference if one was a “calm, cool, and detached” academic while Hose’s burnt remains sat in a storefront window. His killers had abandoned objectivity a long time ago.

To that point, Du Bois’s disavowal of the idea of objectivity was also a condemnation of its racialized use. Du Bois later remembered that he once “regarded it as axiomatic that the world wanted to learn the truth and if the truth was sought with even approximate accuracy and painstaking devotion, the world would gladly support the effort.” The Hose lynching (and, as Aldon Morris has shown, the dismissal of his scholarship) proved him wrong.2 The lynch mob did not care that Wells disproved the “threadbare lie” about the black beast rapist. They wielded their passions and prejudices as a cudgel against objective scholarship. Accordingly, Du Bois was forced to admit that “there was no such definite demand for scientific work of the sort that I was doing.” His scholarship would have to be re-conceptualized. It would have to be paired with struggle.

Today, we stand on the firm foundations established by Du Bois and numerous other scholars who asserted that, to paraphrase historian Vincent Harding, the work of black history is always political. Still, it is worth recalling their past musings on objectivity. Indeed, on the eve of a new academic year, those musings are just as relevant now as ever.

There is no doubt that scholars will enter classrooms this fall with a set of pressing questions. What does it mean to teach in a Trump climate? How do we respond to the searing question of whose [black] lives matter? What lessons will we learn from the mounting, disingenuous calls for law and order?

In short, what, in this tumultuous moment, with all of our dreaming, studying, and teaching, will we do in this fierce fight?

The immediacy of those questions, new and old, struck me on a recent drive to campus. I was listening to an NPR Code Switch podcast episode entitled “What Does ‘Objectivity’ Mean to Journalists of Color?” The hosts, Gene Demby and Shereen Marisol Meraji, posed that question to Pilar Marrero, a Venezuelan-American political journalist with La Opinion, and Wesley Lowery, an African American reporter with The Washington Post. Both gave well-considered answers but Lowery’s had particular resonance. The idea of objectivity, he noted, is inherently flawed. It is a means of reinforcing racist agendas. Lowery explained that an unattainable standard of objectivity is routinely applied to reporters and journalists of color, especially those who write about race and racism. On the other hand, their white counterparts are assumed to be unbiased–to have some sort of natural penchant for impartiality. That is why the first reports about police shootings of black people—those that shape public impressions of their lives and deaths—almost always come from police departments. When whiteness becomes the standard of objectivity, Baltimore County Police gets to kill Korryn Gaines and then write her obituary.

That trend coheres with the longer racialized history of objectivity. It should give us pause about prioritizing detachment over truth in our classrooms this semester. Or striving for fairness in the writing tasks we undertake this year. Neither have much merit–not when demands for and definitions of objectivity still come from those who have yet to examine their own prejudices. Instead, scholarship and teaching must be purposeful and truthful. Both must be passionate, not dispassionate. Both have to be responsible to actual political and social conditions, not distanced from them. After all, social analysis is nothing without social transformation. And one cannot be calm, cool, and detached while Negroes remain lynched, murdered, and starved.

Comments on “The Black Intellectual Tradition and the Myth of Objectivity”