In 1911, Richard Greener was introduced to an audience as “‘the first colored graduate of Harvard,’ ‘ex-Consul to Russia,’ and ‘the most learned man the Negro race has produced’” (156). Yet a century later, Katherine Reynolds Chaddock observes in Uncompromising Activist: Richard Greener, First Black Graduate of Harvard College, few have heard of him. Drawing on an impressive range of personal papers and periodicals, she uncovers a life marked by insights into what Greener called “‘that damnable American ghost,’” race (129).

This is more than a biography. A historian at the University of South Carolina, Chaddock specializes in the history of education in the nineteenth and early twentieth centuries. It shows. Each chapter, though defined by a period of Greener’s life, begins or soon interjects with a vivid picture of the society and institutions in which he lived and worked. “How Greener would fit into the changing landscape of [Black] activism” emerges as a central theme (119). Through his eyes, as he travels around the United States, we learn the history of race in America.

Readers drawn by the celebratory title should prepare for a letdown of sorts. Greener’s achievements do deserve and receive praise. But Chaddock uses them to draw a contrast with the period. This book chronicles the opportunities and the failures of Reconstruction. Amid successful white resistance to Black freedom, Greener “could not have experienced a worse time to be an eloquent and determined advocate for racial uplift” (5).

Twelve chapters divide roughly into four parts: Greener’s education, his academic career, his political work, and his diplomatic post and its aftermath. Chapters 1 to 3 follow him from birth through college. Born in Philadelphia in 1844 and raised in Cambridge, Mass., he studied at schools including Ohio’s Oberlin College and Cambridge’s Harvard. He became Harvard’s first Black student when he arrived there in 1865.

From the beginning, Greener developed a knack for meeting prominent Americans and for showing up on the field of racial action. As a boy he caught glimpses of Charles Sumner and Henry Wadsworth Longfellow. At age sixteen he helped protect Wendell Phillips from a mob at a Boston antislavery meeting whose speakers also included Frederick Douglass. In college he impressed Senator Sumner with his writing in the Harvard Advocate and began a long friendship. 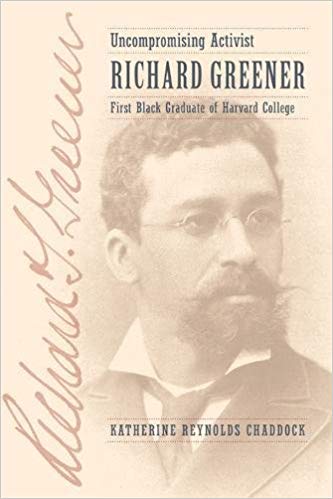 Chaddock stresses one lesson Greener learned as Harvard’s only Black student: “acceptance across racial boundaries was crucial to having a favorable experience” (31). That lesson developed into a willingness to work with whites and an opposition to segregation, both of which put him at odds with many Black leaders.

Though inclined toward a career of speaking, writing, and lawyering, this Harvard man knew that race limited his options. Chapters 4 and 5 trace his journey to several educational institutions for Blacks. While teaching at Philadelphia’s Institute for Colored Youth (now Cheyney University), he continued to appear at momentous events. On election day in 1871, he saw a white police officer shoot at an unarmed Black man and then found a Black colleague killed by a white political operative. Sparking community outrage and resonating today, jurors acquitted the operative despite numerous eyewitnesses’ testimony to the murder.

Reconstruction created a few unprecedented opportunities for African Americans. In 1873 the University of South Carolina became the first Southern state university to educate Black and white students together. When most white students left in disgust, Blacks happily filled their seats. When most professors resigned, scholars more favorable to integration—including a single Black man, Richard Greener—arrived in Columbia to teach.

Greener became a firm advocate of equal educational rights. He pressed his colleagues and legislators to admit more Black students. He promoted integration at all the state’s public colleges for the benefit of both Black and white South Carolinians. Perhaps most important, he successfully championed the elimination of tuition and the awarding of scholarship stipends to make the University of South Carolina a real option for formerly enslaved and now destitute people.

He also began to promote other causes. In 1875, for example, he wrote that enfranchisement under the Fifteenth Amendment merely “‘gave back to us the rights which always belonged to us, and had been only withheld through fraud and force’” (60). Southern white resistance, he argued, required the amendment’s enforcement through the civil rights bill then under consideration. Congress soon passed it, though in a watered-down form.

The return of conservative whites to power and the end of integration at the university in 1876–77 triggered his most politically active phase. Chapters 6 to 10 chronicle Greener the justice-seeking lawyer, speaker, and writer. Having earned his law degree while teaching, he joined a Washington, D.C., practice and became dean of Howard University’s law department. In 1881 he used his legal credentials to help defend a Black U.S. Military Academy cadet accused of faking an attack by white classmates. Greener lost the case but earned a national reputation. Chaddock, true to form, uses the court-martial as an entrée into the story of African Americans at West Point.

Greener became a prominent scholar of race. In “The Intellectual Position of the Negro” (1880), he traced hundreds of years of Blacks’ achievements. His support of Blacks’ migration from the inhospitable South to the West led to organized debates between him and Frederick Douglass. Greener’s arguments, which included a pithy summary of Reconstruction’s failure, earned him loud applause and the respect of his much older and more famous opponent. In another lecture, presaging a twentieth-century movement, “he suggested that Islam might be better than Christianity for Africa’s native blacks” (102).

In 1894 Greener published “his eloquent and creative approach to race relations, ‘The White Problem.’” Making “a large splash,” he there blamed “white bigotry,” not Black inferiority, for America’s racial problems (121–22). Disputing the image of white men raising Blacks up from degradation, he stressed Blacks’ roles in ending slavery and building their own freedom.

The last two chapters cover Greener’s diplomatic career and his retirement. Sent to Vladivostock, Russia, in 1898, he became the first African American consul in a predominantly white country. He resumed some advocacy after his return, but mostly grew “bitterly pessimistic” as he witnessed the growth of Jim Crow segregation (151). Meanwhile, before his death in 1922, he largely lost contact with the families he had established in America and in Russia. Those losses, both tied to racial identity, help Chaddock analyze the constructed meanings of race and color.

I once contemplated writing a biography of Greener. Thank goodness I abstained. Chaddock has produced a far better book than I could have. Her writing is snappy, her structure gripping. Few works of history read so much like a good novel. Further, she engages readers by tying Greener’s story to American memory today: the book begins with the discovery of a mysterious trunk (guess whose Harvard diploma it contained) and ends with the rediscovery of his life (played by Samuel L. Jackson). She links these discoveries of the man to the burial and the recovery of history writ large.

Historians of education and of postbellum Black history will, of course, want to read this book. But so will many others. Chaddock deftly uses Greener’s life as a window into each of the times and places in which he lived and into each of the debates in which he engaged. Uncompromising Activist thus would fit nicely into an undergraduate course on either African American or nineteenth-century U.S. history. Readers outside academia would find it a coherent and ample introduction to Black history after the Civil War—a surprising and rare accomplishment for a scholarly book, let alone a scholarly biography.

This biography (the first on Greener aside from a 2002 dissertation by Michael Robert Mounter) does leave me with a few questions. Greener studied at Harvard while Aaron Molyneaux Hewlett, its first Black faculty member, taught physical education there; did they develop a relationship? Greener, during his teaching career, replaced a “competent” woman as principal of a Black high school; can we learn about gender beliefs from this hiring (43)? But to say the book sparks curiosity is hardly an indictment. Chaddock has written a fascinating account of a man and a world that helped shape our own and that deserve rediscovery.

Michael David Cohen is a research associate professor of history at the University of Tennessee, Knoxville, and the author of 'Reconstructing the Campus: Higher Education and the American Civil War' (2012). He serves as editor of the James K. Polk Project, a soon-to-be-complete effort to locate and publish the eleventh president’s correspondence. Follow him on Twitter @michael_d_cohen.