loading...
By Gerald Horne June 10, 2017 Comments Off on Revolution and Counter-Revolution: Toward a New Interpretive Framework

Above all, I thank the editors and contributors for organizing this forum. Space limitations bar my responding at length to the often brilliant insights delivered by this panel of eminent scholars. I trust that readers will indulge my interest in filling in some of the remaining blanks of my scholarly output.

Professor Byrd refers to my writing on Hollywood. My first book in this realm  engaged in part the matter of organized crime. Motivated by the then swirling controversy about “gangsta rap,” my book intended to suggest that the entertainment industry and gangsterism—worldwide—are complementary (a point I made in an easily accessible article I wrote some years ago: “Rethinking the Lumpen”). Ignoring this point is part and parcel of the trend of discussing our community in a vacuum, detaching it from this society—or even global trends—which is an aspect of the ongoing attempt to isolate us in the service of malign purposes.

Gangsterism is a theme that we all need to engage more directly. My upcoming book on the 17th century (see below) bruits this subject, as does my Zimbabwe book, my Black Los Angeles book, and a book on which I am currently working on the political economy of Jazz. I submit that one cannot begin to understand the U. S. and/or the predatory nature of U. S. imperialism and the African Slave Trade that propelled it, without an acute understanding of what I have termed the “Big Lumpen.” This topic will also be a focus of a book on boxing that I plan to start next year. (Parenthetically, I also plan to begin a book next year focused on Washington, D.C., considering how anarchists, Communists and Black Nationalists have confronted the seat of national power.)

Contemplating the lumpen is part of an attempt to expand upon the question of class among African-Americans, which also can be found in my biography of the U. S. Negro who “passed” and became the leader of fascism on these shores, Lawrence Dennis. My book, which the University of Illinois Press will publish within weeks—The Rise and Fall of the Associated Negro Press:  Claude Barnett’s Pan-African News and the Jim Crow Paradox—also speaks to the question of class insofar as it scrutinizes a member of the Negro elite and, inter alia, how his maladroit maneuvering contributed to the erosion of an important institution, the Black Press. This book also addresses a major issue that demands more attention:  how the process of Jim Crow’s retreat came at a cost, including some of today’s youth waxing nostalgically about the bygone era of rigid apartheid.

My book on the Watts Uprising of 1965 also touches on the above; therein I also sought to suggest that what befell Black L.A. was—again—part of a transnational trend that reached a zenith in Afghanistan in recent decades and also sheds light on the rise of right-wing populism nationwide: i.e. the battering of the left creating favorable conditions for the ascendancy of narrow nationalism and enhanced patriarchy. 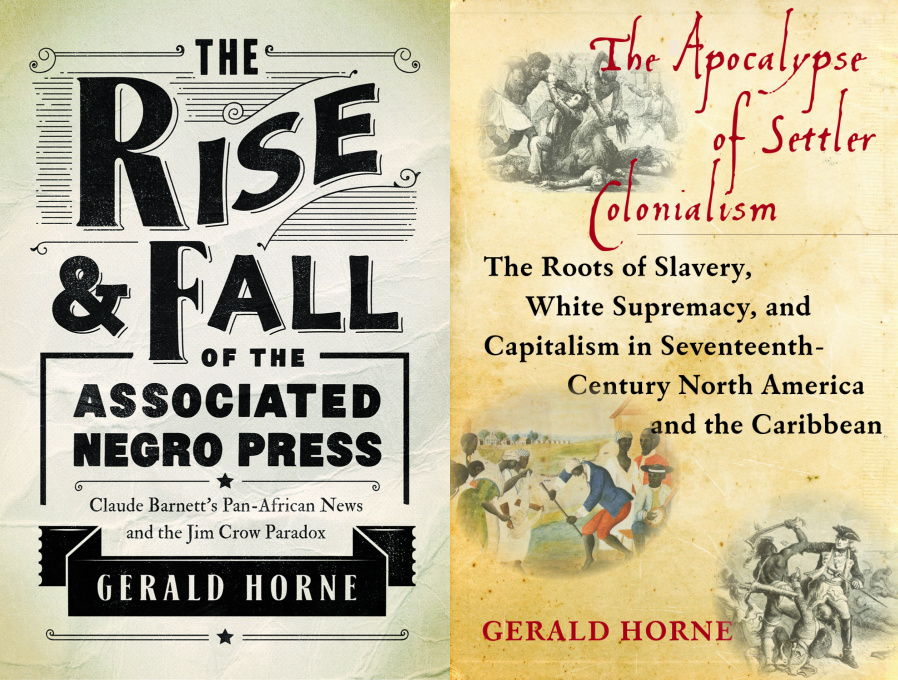 In that light, I should mention my books on settler societies in Africa—Rhodesia and Kenya—which should be joined by a major work to be published late next year on U. S. imperialism in Southern Africa. Clearly, this work on Africa has informed my work on U. S. slavery, which—as Professor Johnson notes—begins chronologically in 1688. However, my book, The Apocalypse of Settler Colonialism:  The Roots of Slavery, White Supremacy and Capitalism in North America and the Caribbean in the 17th Century (Monthly Review Press, 2017) pushes the clock back further. I urge colleagues to follow me on this path for I am convinced that the seeds of many of today’s ills reside in the early history of enslavement and dispossession, just as African-American history should be in conversation with African History—to the advantage of both. This book is a broad synthesis, setting out landmarks in the torturous path that led to so many millions of Africans populating the Americas. These include e.g. the defeat of the Ottoman Turks at the gates of Vienna in 1683, which relieved pressure on the Western Europeans allowing them to turn with more dedicated bloodthirstiness to West Africa (obviously the current eruption of Islamaphobia should be discussed in this context); the systematizing of the slave trade imbedded in the advent of the Royal African Company in 1672; London’s ouster of the Dutch from Manhattan and what are now the Mid-Atlantic states by 1664:  as competitors to England fell by the wayside or were co-opted, the ability of Africans to engage in arbitrage—one of our most valuable tools—was reduced correspondingly to our detriment; and there was the sugar boom of 1654-1655 driven by the ouster of Spain from Jamaica and the concomitant embrace by London of those Jewish entrepreneurs who fled Brazil in the wake of the Portuguese displacing of the Dutch in Brazil, delivering the capital and expertise of slave-based sugar production (at once, this epochal and munificent trend demanded more enslaved Africans to produce sugar, while opening the door to buying off more poorer Europeans—the key to the “stability” of settler colonialism.)  The Treaty of Westphalia of 1648 too is part of this narrative, as well as the Civil War in England and the overriding matter of climate change—but the wider point is that much work needs to be done to explore the roots of our present plight.

I say this in particular since—as the 15 May 2017 edition of the New Yorker suggests—the election of the 45th president has caused many of the U.S. elite to rethink the origins of the U.S., strangely including without citation elements reflected in my otherwise controversial scholarship on 1776, which devalues the U.S. founding (I fully understand:  quoting a Black Radical in the mainstream can be dangerous to one’s career). The same mindset holds true for the May-June 2017 edition of the bible of liberal hawks, Foreign Affairs, where it is suggested that the U. S. only became a democracy in the 1970s with the implementation of the Voting Rights Act, implying that anti-democratic tendencies of today should not be seen as surprising. Yes, this is at odds with the heretofore bedrock idea that a grand democracy was inaugurated in 1776. That elites are becoming more questioning and probing than many of our scholars—including those that consider themselves “radical”—concerns me profoundly. As Professor Byrd observes, a new narrative framework of our history is in order; a friendly amendment:  I suggest “Revolution and Counter-Revolution.” 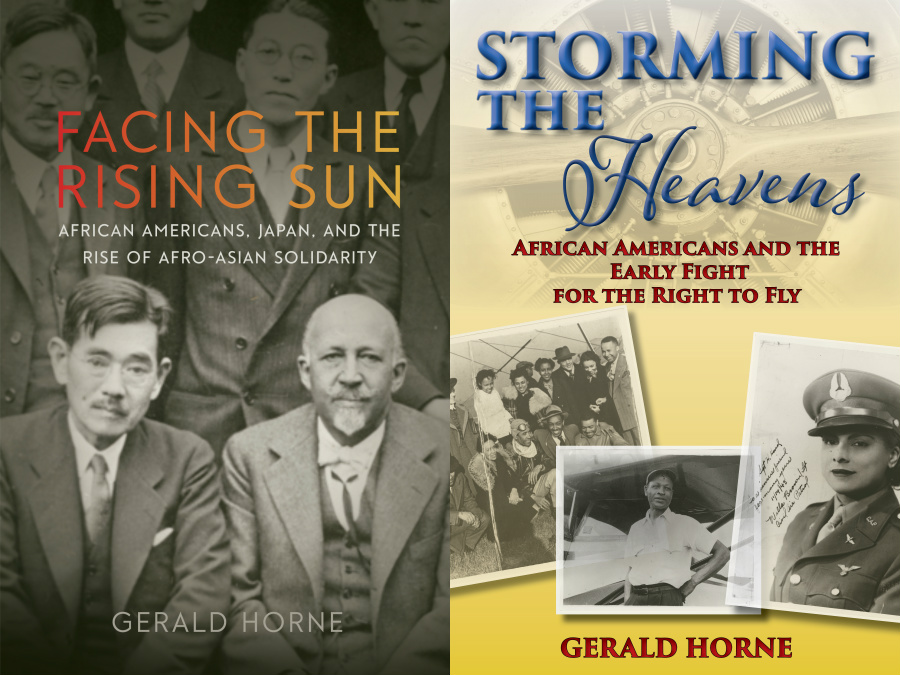 As for my work on Asia, this oeuvre will soon be joined by Facing the Rising Sun:  African Americans, Japan and the Rise of Afro-Asian Solidarity (New York University Press, 2017). As I have suggested elsewhere, the Haitian Revolution not only ignited a general crisis of slavery, that could only be resolved by that system’s collapse but, as well, the Bolshevik Revolution of 1917 initially created a similar crisis for capitalism, which—as Professor Burden-Stelly observes—attracted the dedicated attention of a corps of African-American activists (I should note in this context my book on the Civil Rights Congress, headed by William Patterson and my biography of the Jewish-American screenwriter and Communist, John Howard Lawson—one of Paul Robeson’s comrades).  These intellectuals and activists had the intelligence to understand the importance of shifting the axis of society to “class,” and away from “race”: the latter inaugurated by 1776 (or “religion”—zealotry actually—now making an unsurprising comeback in the aftermath of the setbacks inflicted on the class project).

However, the other challenge to U.S. imperialism in the 20th century emerged in Tokyo precisely on the basis of “race” and in determining how and why Jim Crow began its agonized retreat, it would be myopic to ignore Japan. This latest NYU Press book contains, I believe, a relatively neglected chapter in the evolution of Black Nationalism. It also speaks to the ongoing “general crisis of white supremacy,” a subject that has preoccupied me for some time and, a Copernican trend that no doubt, will intensify given the rise of China—and the India/Japan dyad—in this century.

The fourth book to be published this year, started as an extra-terrestrial exploration, i.e. how Africans engaged the solar system beyond this planet but morphed into Storming the Heavens:  African Americans and the Early Fight for the Right to Fly (Black Classic Press, 2017). Given the continuing impact of science and technology on our community—including the acceleration of robotics and Artificial Intelligence—it would be well if more scholars would dip into the vast archives on this broad topic in order to provide a hint of the shape of things to come.

Finally, my Cuba book will be translated into Spanish there:  I hope that this volume will be of assistance to those islanders seeking to construct socialism in the face of unremitting hostility from U. S. imperialism, a phenomenon with which Africans on this side of the Florida Straits are all too familiar.

Again, many thanks to the stellar scholars who have participated in this forum:  I am deeply appreciative.

Gerald Horne holds the John J. and Rebecca Moores Chair of History and African American Studies at the University of Houston. Horne received his Ph.D. in history from Columbia University and his J.D. from the University of California, Berkeley and his B.A. from Princeton University. His research has addressed issues of racism in a variety of relations involving labor, politics, civil rights, international relations and war. One of the nation’s most prolific and influential historians, Horne is the author of more than thirty books.