This is the third day of our roundtable on Cedric Robinson’s book, Black Marxism: The Making of the Black Radical Tradition. We began with introductory remarks by Paul Hébert on Monday, followed by remarks by Joshua Guild on Tuesday. In this post, historian Jennifer L. Morgan explores how Robinson situated the Black radical tradition within the legacy of racial slavery, and highlights the significance of Robinson’s work for historians of slavery and the Black Atlantic world. 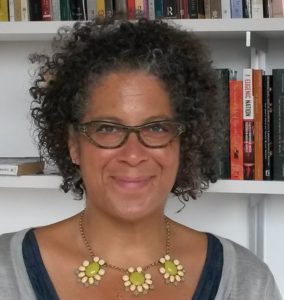 Jennifer L. Morgan is professor of history and of social and cultural analysis at New York University. Her research examines the intersections of gender and race in colonial America, and she is author of Laboring Women: Gender and Reproduction in the Making of New World Slavery (2004). She is currently at work on a project that considers colonial numeracy, racism, and the rise of the transatlantic slave trade, tentatively entitled “Accounting for the Women in Slavery.” Follow her on Twitter at @profjlmorgan.

Scholars of black history and radicalism in the late 19th and early 20th century most widely engage Cedric Robinson’s Black Marxism. And yet, it set the stage for many of the questions I ask about the history of slavery in the early modern Black Atlantic. By grounding his argument about the nature of black radical response to racial slavery in early modern Europe, Robinson effectively turned the tables on the way that we conceptualize “radicalism” and on the kinds of scholarly and political work in which we must engage to fully comprehend the genealogy of racial slavery and its afterlife.

It would be tempting to take as my starting point Robinson’s observation that “everywhere one turns or cares to look, the signs of a collapsing world are evident” (p. 412). I will instead focus on Robinson’s discussion of the early African Diaspora and the processes he traces in mapping out the erasure of the African past from the European imaginary. For me the most prescient and important part of this crucial text is Part 2, where Robinson illustrates the relationship between Europe’s development of racial slavery and the simultaneous development of a Black radical tradition of protest, revolt, and a rejection of racial capitalism. His sweeping discussion of the relationship between early Modern capitalism, the formation of nation states, and the transformation of African people into capital maps a terrain for scholars of the black Atlantic world that remains provocative and generative.

Robinson makes clear that Africans were a crucial part of Western historical consciousness well before the 15th century, and that the work done to eradicate that past was at the heart of both the trans-Atlantic slave trade and the way in which black people responded to their enslavement. This response is the Black radical tradition—examples of which he elaborates gracefully and generatively in part three of Black Marxism.  Robinson forces us to consider what we overlook when we begin with Hegel’s 19th century claim that Africa had no history—how we come to Europe’s firm belief that “the measure of mankind was the European” (p. 99). We overlook the complex history of the rise of Genoesean capitalists and the Portuguese nation state in the 15th century, or Robinson’s claim that the “relationship between capitalism and slave labor [served as] the very foundation of New World enterprise” (p. 110). The reluctance in the early 1980s to cede the relationship between slavery and capitalism did not deter Robinson from carefully and robustly supporting Eric Williams’s claims that the two were intimately linked for the English.

Robinson expanded the reach of Williams’s work by situating the consequences of slave labor across Europe but he also makes it clear that the shift from mercantile to industrial capital was accompanied by both what he called the “invention of the Negro”—or the rise of anti-black racism—and the rise of black radicalism through enslaved people’s rejection of the terms of racial slavery.  Now, there has been a spectacular rise in scholarship that probes at the connection between slavery and capitalism recently, but its focus on the 19th century leaves Robinson’s provocation here still largely unaddressed. Both in terms of the history of capitalism and, crucially, in terms of the ways in which race and race thinking are embedded in that history. But most importantly, Robinson’s demand that we locate this history in the early Modern black Atlantic is one that is fundamentally not about Europe. Failing to engage this early history means that we also fail to fully situate Africans as people who enter into captivity with a wealth of history, knowledge, experience, and worldview firmly in place. It is this piece that is so crucial. Without it, we persist in mounting empty place holders where the African past should be and thereby re-inscribe the enslaved in a Hegelian void, even as our intention is categorically the opposite.

Robinson’s work on the early Modern black Atlantic (though he didn’t name it as such) is a crucial provocation to contemporary scholars—and one that is, to some degree, being taken up. In the past ten years, the number of studies of the history of slavery and freedom in the seventeenth and eighteenth century has grown incrementally. Further, scholars of political and cultural history of the Atlantic world are increasingly clear that it is untenable to omit the lives of the enslaved from their focus. However, I am not so confident that Robinson would have seen much of this work as in conversation with his. What he models in these chapters of Black Marxism is a commitment to understanding the enslaved as people with both history and political acumen—people who respond to their enslavement not simply from the visceral space of agony, but from the critical space of power and politics.

As he concludes his overview of slave revolt in the Americas from the 16th century forward, Robinson writes “the peoples of Africa and the African diaspora had endured an integrating experience that left them not only with a common task but a shared vision.”(166)  This is, again to quote Robinson, the contradiction that was the “dialectic of imperialism and liberation.”(166)  It is here that I find his work most provocative and, frankly, inspiring.  What does it mean to locate the roots of black radicalism in the 16th or 17th century?  What does it mean to approach the study of early enslaved Africans with the assumption that they had a critical notion, an analytic of power, about what was being deployed against them?  The people I study are women, enslaved by the English in the 17th and early 18th century.  The framework that Cedric Robinson put into place more than thirty years ago drives my efforts to carefully consider the impact of enslavement on their lives and on the lives of those around them. In the absence of archival evidence that clearly illuminates their interior lives, Robinson’s work compels me to articulate the ways in which enslaved women’s erasure from the archives is itself crucial to the development of racial capitalism—from that vantage point it is impossible to forget them or to minimize their centrality to the histories with which I am concerned.

Black Marxism is a profound mediation on the importance of history. Robinson reminds us that there is an earlier genealogy of Africa and Africans whose erasure is at the heart of the rise of racial capitalism. As such, Robinson insists that contemporary engagement with liberation depends on understanding its dialectic relationship to those erasures. For the historian, Black Marxism is a challenge. It asks us, simply, to do the work to understand what happens when the histories of Africa and Africans are obliterated under the sign of “Negro,” and more importantly it takes as a given that the men and women who endured enslavement in the Atlantic world, from the very beginning, crafted politicized and radical responses to the violences they were forced to endure.

Comments on “Thinking with Black Marxism”