In today’s post, blogger Rebecca Brenner interviews Christopher M. Tinson about his new book, Radical Intellect: Liberator Magazine and Black Activism in the 1960s. Tinson is the Director of the Program of African American Studies and Associate Professor of History at St. Louis University. His research and teaching is interdisciplinary and focuses on Africana radical traditions, U.S. Ethnic Studies, critical media studies, incarceration, and race and sports. His writings and reviews have been published in the The Black Scholar, The Feminist Wire, Radical Teacher, the Journal of African American History, Equity & Excellence in Education, and Counterpunch. His first book entitled Radical Intellect: Liberator Magazine and Black Activism in the 1960s is published on UNC Press. Professor Tinson is a highly sought-after speaker and mentor who has led professional development workshops and lectured at numerous college campuses, high schools, and carceral institutions throughout New England and the Tri-State area. He is an avid lover of basketball, used bookstores, and good coffee. His book, ‘Radical Liberator,’ was awarded the 2018 Pauli Murray Book Prize from the African American Intellectual History Society. Follow him on Twitter @Dahktin.

Rebecca Brenner: Tell us more about how you came to this project. What are some of the experiences and factors that motivated you to write a book about Liberator Magazine?

Christopher M. Tinson: I must first thank several people who urged this project from the beginning. This includes William “Strick” Strickland, Carlos Russell and Pete Beveridge. Strickland allowed me to use his name when I reached out to Carlos Russell; Dr. Russell, who recently passed away, was a long-time staff writer for Liberator who put me in touch with Pete Beveridge, who connected me to a number of former writers for the periodical who were still living at the time that I started this project years ago. I was doing research on Afro-Panamanians in the U.S. when I stumbled on Dr. Russell’s writing in Liberator. As a scholar of 20th century radicalism, I then came across an excerpt from Liberator in John Bracey, Jr., Elliot Rudwick, and August Meier’s edited anthology Black Nationalism in America. From that time, I was intrigued by Liberator’s standing as a fierce, independent publication that did not have the funds, popularity, and thus widespread appeal of some of its peer publications in the 1960s and 70s. But as an expressly political vehicle, I thought that Liberator was worthy of study because it drew so many different radical thinkers into its publishing arsenal. Many of its writers were local authors, while others were on their way to global renown. Yet all of them, known and unknown, participated in movements for justice and Black liberation. And while I knew Liberator was referenced often as a barometer for more assertive directions in Black movement politics in that period, I thought I should do a deep dive and investigate their signature contributions to Black thought and politics in this period. The book shows which figures were around Liberator to shape its views, while also demonstrating Liberator’s place in Black left circles of the period.

Brenner: Radical Intellect analyzes 1960s Black activism and internationalism through the lens of Liberator magazine. What could you discern by focusing on one magazine that related studies might have missed?

Tinson: Liberator brought together a range of voices whose contributions I discuss at length in the book. I was drawn to Liberator’s ideological spectrum, which revealed a range of Black-centered thinking, approaches, and sometimes competing visions of structural social change within the left. So, while most studies look at the polarity of left vs. right, Radical Intellect is essentially a book about key debates within the left, about the directions a radicalized Black public might go in seeking long-term redress to longstanding grievances and about Black community control in the United States, and play a part in African descendants’ governance around the globe. Liberator magazine remains a pivotal repository to study the spectrum of visionary dissent, cultural production, and radical imagining that emerged in the 1960s amongst Black activists.

Brenner: Tell us more about the primary sources you used in your book. What benefits and challenges did you encounter while incorporating oral history interviews into your narrative?

Tinson: There are always benefits and challenges to including interviews. I found it necessary to check in, interview, and include the voices of key activists who were still living. A scholar writing about a period in history should obviously not rely only on the interviews, but these are a key source of information. For me the benefits outweighed the challenges. Activists who participated in movements for justice and radical change are important for any scholar researching and writing about those movements. The histories we write must include their voices and perspectives to help give a sense of the stakes of their involvement and how their generation interpreted events. More importantly, historians can help show other aspects of things that happened around activists that they perhaps were not or could not be aware of in the moment. Historians have the great luxury to put conversations with activists of the past in conversation with archival materials including government documents, newspapers, and the personal papers of activists, which collectively comprise a fuller understanding of the past. In order to effectively describe Liberator writers, readers, and artists, this meant understanding their place in the constellation of activist work and ideas that shaped Black activism in the 1960s. I wanted to discern what certain activists thought, felt, and worked towards as they imagined and attempted to promote an anti-racist, anti-imperialist future. 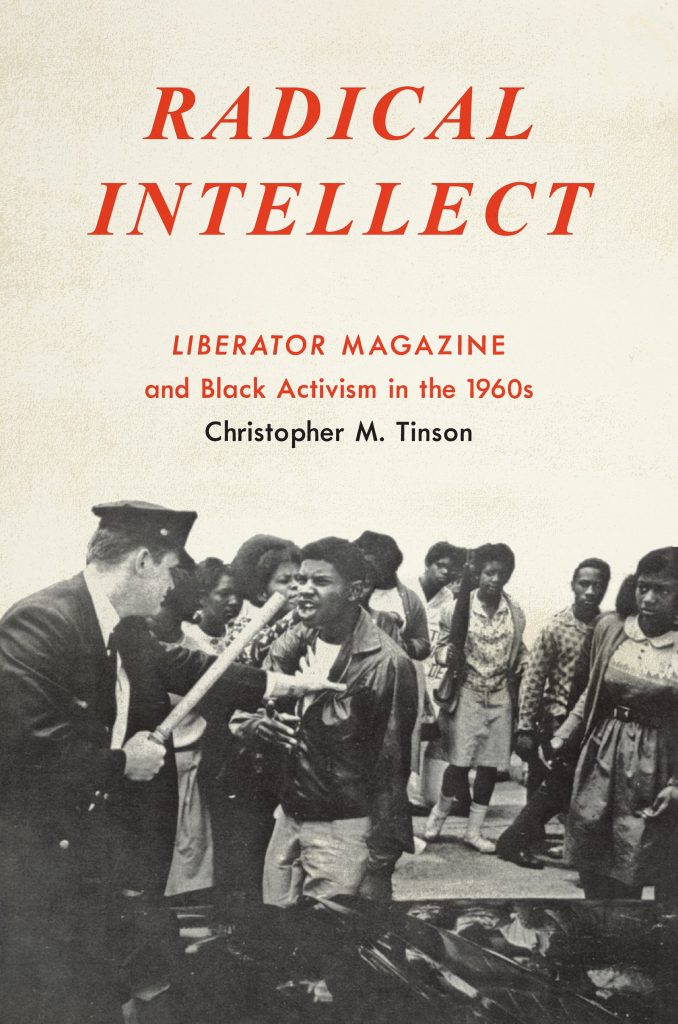 Brenner: Some scholars of Black activism witnessed or participated in social movements of the 1960s. To what extent can a new generation of historians offer a fresh perspective?

Tinson: There are still a number of stories to be told. Scholars are unearthing important histories of race, gender, and activism, which are crucial to not only our understanding of the past but also of how we understand the present. New research on the efforts of Black activists to transform urban space, places of labor, and spaces of learning will continue to be written. We will likely never know all there is to know about a given movement—the day to day activities, the advances and the setbacks, and the lingering traumas—but we will be able to tell the stories of those who participated, what they were able to accomplish, and how we should hold them in historical light. This work is chiefly concerned with political possibility in the face of state power. By state power, I mean the authority of government over the lives of African American youth, families, communities and individuals. The Liberator activist-writers and their allies worked towards a day when the communities they were from and those they represented would be able to determine the outcome of their lives. They possessed a radical vision for how this transformation of power could manifest, including a full remaking of the social order. Such a view put them at odds with a more acceptable mainstream, but equally threatening, view of rights protection, expansion, and greater inclusion into American political, social, and economic norms. And yet, the voices and activist work that I discuss in the book shows Liberator writers deeply invested in local efforts including school demonstrations against racially and economically segregated schooling, political invisibility, and police violence. For them, new political possibilities emerged in transnational solidarity that linked struggles for justice in the US with decolonial struggles in Africa and the Caribbean.

Brenner: How does today’s political discourse around Black activism differ from the 1960s and early 1970s, and what can we learn from key figures such as Daniel H. Watts, Lowell Pete Beveridge, and Richard Gibson?

Tinson: As it relates to Black today’s political discourse there are not many spaces for Black radical thought. Black Agenda Report and Black Commentator are still viable and crucial spaces for the circulation of ideas about radical possibilities, but these spaces are overshadowed by other more mainstream spaces like The Root, HuffPost, and the Griot, which are tied to major news networks. As a result, independent outlets are rare for the kinds of political activism and reader engagement Liberator offered despite the seemingly vast space opened up by social media. On the academic-activist side of things, The Black Scholar and SOULS remain important sites of intellectual engagement, and Black Perspectives is the go-to space that allows historians and other academics broader exposure and public engagement.

I think we are still at a point where we are figuring out how serious research and online platforms interact effectively. The point to remember though is that Liberator writers were largely volunteers, committed activists, and working artists who believed that lending their skills to movements for racial and economic justice—to struggle—was an urgent necessity. I’m not sure that that is as pressing a concern for many today. While the media we use has necessarily changed since the 1960s, it is hoped that our generation of working artists, activists, scholars, and writers too will be as committed to a sense of justice as previous generations were.

Still, there have been signs of deep commitment to justice and radical transformation as evidenced in the Ferguson/St. Louis uprisings against police violence in the aftermath of Michael Brown, the struggles led by Black women in the Black Lives Matter movement, struggles against water pollution in Flint, Michigan, #FeesMustFall and #RhodesMustFall led by students in South Africa, and prisoner-led strikes against America’s carceral institutions. Some of these efforts are calling for reforms to existing institutions and others are calling for wholesale reimagining of the social, political, and economic structures that exist. There are grassroots efforts around the country that some of us will never learn about, nor will there be a book written about them. These are led by individuals who are concerned about their immediate circumstances. They are not always tied to large scale envisioning or seeking to carry on a particular revolutionary legacy, but these should matter to us. We are still living through Frantz Fanon’s maxim that each generation has an obligation to discover its mission, fulfill it or betray it.