This month I interviewed Tommie Shelby on his most recent book, Dark Ghettos: Injustice, Dissent, and Reform (Harvard University Press, 2016) and his larger work on political philosophy. Dr. Shelby is the Caldwell Titcomb Professor of African and African American Studies and of Philosophy at Harvard University. His new book, Dark Ghettos: Injustice, Dissent, and Reform, recently won the 2016 Book Award from the North American Society for Social Philosophy. He is also the author of We Who Are Dark: The Philosophical Foundations of Black Solidarity (Harvard University Press, 2005). Along with Derrick Darby he is the co-editor of Hip Hop and Philosophy: Rhyme 2 Reason (Open Court, 2005), and he and Brandon Terry coedited To Shape a New World: Essays on the Political Philosophy of Martin Luther King, Jr. (Harvard University Press, 2018). Shelby’s writings focus on questions of racial and economic injustice and on the history of Black political thought, and his numerous articles have appeared in journals such as Philosophy & Public Affairs, Ethics, Political Theory, Critical Inquiry, Du Bois Review, Critical Philosophy of Race, and Daedalus. Follow him on Twitter @tommie_shelby.

Neil Roberts: Your award-winning book We Who Are Dark (2005), edited volume Hip Hop and Philosophy (2005), and numerous essays including “Is Racism in the ‘Heart’?” (2002), “Two Conceptions of Black Nationalism” (2003), and “Justice and Racial Concialiation” (2011) are essential for scholars seeking to demonstrate the significance of political philosophy for Africana thought, the intersections of African American Studies and intellectual history, and Black politics. Could you share with us what led you to write the provocative text, Dark Ghettos: Injustice, Dissent, and Reform (2016), and the relationship between your previous scholarship and newest book?

Tommie Shelby: Like a lot of people (though not nearly enough), I’m outraged by the continuing existence of ghettos—Black metropolitan neighborhoods marked by involuntary racial segregation and multiple forms of concentrated disadvantage. I believe the persistence of ghettos reveals something deeply troubling about U.S. society as a whole. The public debate over these neighborhoods and their stigmatized inhabitants has, for decades, focused narrowly on institutional racism versus individual responsibility and not sufficiently on broader questions of social justice, particularly economic and gender justice. When commentators do focus on social injustices, they often point to past wrongs, sometimes insisting that what Black people need are reparations. However, while past injustices shape our present in countless ways, there are numerous ongoing injustices (which affect Blacks and many others) that must be corrected if we are to live in a society that truly merits our allegiance and support.

Historical scholarship and social-scientific studies are essential for identifying the forces that created ghettos and that hold them in place. Yet there are questions to be settled (if they can be) by systematic moral reflection. Disagreements about ghetto poverty are partly over historical and social facts. But these disagreements are also rooted in disputes over values, in particular over what social justice requires. Relying on ordinary empathy, religious ideas, or moral common sense—particularly in our pluralistic and racially divided society—can take us only so far. Here is where philosophy can help. Though no consensus has emerged, philosophers have thought long and hard about questions of justice, offering answers of uncommon depth and precision. What I do in the book is build on this tradition of inquiry to tackle the complex and fraught moral questions that ghettos raise.

Dark Ghettos is not a break from my previous work. Researching and thinking about the race-class nexus and its significance for Black life have been my principal preoccupation for two decades now. Although, here I attempt to bring in issues of culture, gender, and place. I also continue my practice of drawing from “mainstream” philosophy, Black political thought, and African American vernacular culture. 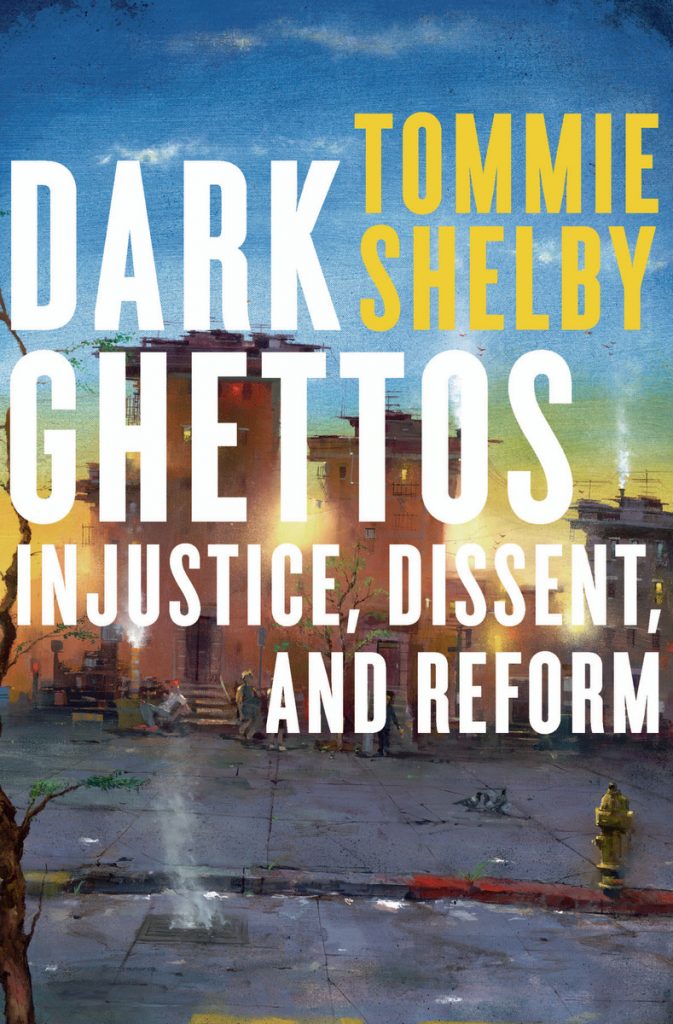 Roberts: You examine the “dark ghetto,” explore the moral and political outlooks undergirding architects of American ghetto communities, highlight the Moynihan Report’s limits, and pose the problem of the existence of ghettos—asymmetrically pertaining to Blacks—as an issue of justice, and invoke W.E.B. Du Bois, John Rawls, and Nas to rethink this problem. In the process, you contrast two ways of studying the dark ghetto: the “medical” model and “systemic-injustice” model. Why should we distinguish these latter frameworks and engage with the aforementioned thinkers?

Shelby: The medical model of social-scientific policy making, which attempts to solve social problems through narrowly targeted interventions, marginalizes questions of political morality that should not be ignored. The framework has three main pitfalls. There is the tendency to hold alterable features of society as fixed and then to suggest minor changes that leave an overall unjust system intact. This often leads to seeing resistance to the status quo as mere pathology or dysfunction. There is also the tendency to view unjustly disadvantaged people as in need of assistance but not as moral and political agents in their own right. And there is the tendency to focus solely on the problems of the poor (or to see the poor themselves as the problem) and therefore to lose sight of (or obscure) the numerous ways the privileged benefit from and are complicit in maintaining an unjust social structure. The systemic-injustice framework I defend aims to avoid these pitfalls.

Du Bois’s The Philadelphia Negro (1899) is the first sophisticated social-scientific book on race and urban poverty in America (though he called U.S. ghettos “slums”), and it exemplifies the medical model of social reform. Du Bois fuses liberal technocratic intervention with Black elite noblesse oblige—a tendency he never fully abandoned despite his increasing radicalism in later years. Rawls provides, to my mind, the most comprehensive, compelling, and developed philosophical theory of justice we have. His theory is much more egalitarian than many have appreciated (for instance, he rejects welfare-state capitalism), and despite the theory’s abstractness, it has great relevance for thinking about the ghetto. His idea of the “basic structure” as the central unit of evaluation and his emphasis on fair cooperation among equals in particular have had a large impact on my thinking. Nas is an exemplar of a form of expressive resistance to ghettoization that I call “impure dissent”—and he is also on any defensible top-five list of MC’s.

Roberts: Injustice, community, culture, reproduction, family, work, crime, punishment, and impure dissent are chapter headings that also function as leitmotifs. There are many controversial claims in the book, especially your discussion of reproduction ethics and defense of the refusal to work by ghetto inhabitants living under unjust conditions. Why describe these themes?

Shelby: These seemingly disparate themes are tied together by three broad aims. Although I focus on racial and economic injustices throughout, I take up the race-class conundrum by engaging with the factors most frequently invoked in explanations of ghetto poverty (residential segregation, culture, single parenthood, joblessness, urban crime, and mass incarceration). I also think it’s imperative to think about structure and agency (collective responsibility and individual responsibility) together. In particular, I wanted to scrutinize various morally infused responses to an unjust social structure—by the state, the unjustly advantaged, and the oppressed—and organizing the book in this way seemed like a good way to do that. Probing these questions did lead me to uncomfortable and sometimes controversial conclusions. But rather than evade the hard questions, I tried to be clear and forthright about these issues, following my reasoning wherever it took me.

Roberts: The crux of Dark Ghettos is a bold call for “ghetto abolitionism” and the use of both “pure” and “impure” forms of dissent to achieve it. Could you describe for us what you mean?

Shelby: I think justice requires that we abolish ghettos. By this I don’t mean that we should eradicate or prevent the formation of Black neighborhoods. Black communities are perfectly compatible with justice, provided they aren’t sites of involuntary isolation and concentrated disadvantage. We can’t abolish the ghetto, however, unless we dramatically change the U.S. social structure as a whole. And this will require more, much more, than fighting racism and reducing poverty.

To bring about such radical change, a galvanizing social vision and political organization are obviously needed (the wealth and technology, I take it, are already at hand). But just as important is a robust political ethics of resistance. Dissent can take a variety of forms. By “impure” dissent I mean actions, including expressive acts, that embody, if only implicitly, valid grievances against society but that contain elements that diverge sharply from widely held norms. Such dissent, particularly when coming from the ghetto poor, might not seem like dissent at all or might involve actions that are judged to be wrong or imprudent. Rather than ignore, dismiss, or condemn it, I argue that ghetto abolitionists should engage with this impure dissent, drawing out and building on its valuable elements to forge and sustain the solidarity and self-respect necessary for broad structural transformation.

Ghetto abolitionism, even with this emphasis on the political ethics of the oppressed, isn’t new. Many have defended versions of it, including Martin Luther King, Jr. Kenneth Clark is also a ghetto abolitionist, and his Dark Ghetto (1965) represents a break (both in mainstream social science and Black critical thought) from the medical model toward an embrace of the systemic-injustice framework. Clark’s book has the mix of empirical, moral, and philosophical inquiry that I was striving for. So while there is much in his book I disagree with, I greatly admire it.

Roberts: What projects are you working on now and do they mark a continuation of or departure from topics addressed in your latest book?

Shelby: Almost all of my past and current work centrally involves philosophical reflection on aspects of African American life and engagement with the history of Black political thought. My colleague Brandon Terry and I edited To Shape a New World: Essays on the Political Philosophy of Martin Luther King, Jr., with contributions from Cornel West, Martha Nussbaum, Danielle Allen, Robert Gooding-Williams, and others. It will be published in February. I am currently working on two book projects. One examines Angela Davis’s case for the abolition of prisons. The other looks closely at Du Bois’s defense of democratic socialism. Both projects continue my longstanding interest in understanding what some have begun calling “racial capitalism.”

Comments on “Race, Injustice, and Philosophy: An Interview with Tommie Shelby”