loading...
By Matthew Teutsch May 5, 2018 Comments Off on Performance Traditions and the “Mardi Gras Indians” in New Orleans

Countless theories surround the history of the “Mardi Gras Indians,” Black organizations in New Orleans that don suits inspired by the ceremonial apparel of Indigenous peoples and parade through the streets during carnival. Some scholars hold that the groups started after seeing the Buffalo Bill Wild West shows that toured through the region in 1884. Others speculate that the “tribes,” as they refer to themselves, have origins from Indigenous communities harboring runaway slaves leading to the merging of the two cultures. Along these same lines, others posit that the use of Indigenous people’s imagery among the Black Mardi Gras Indians exists as a form of solidarity between the struggles that Indigenous and Black communities confront. Essentially, though, as Big Chief Larry Bannock in 1991 once said about the origins of the Mardi Gras Indians, “Nobody ain’t never gonna find the code.”

Unraveling the threads, Dewulf seeks to highlight “the syncretic mixture of African and European elements” found within the Mardi Gras Indians’ performances and civic roles. As such, the author works to distance himself from scholars who trace “black performance back to an untouched, virgin African motherland.” Even though he achieves this feat, Dewulf does not deny the need to challenge Eurocentric views of African history; rather, he notes that his research has led him to discover that “in order to understand the dances in Congo Square [New Orleans], we also need to focus on the amount of contact Africans had with European music and performance culture before they were shipped as slaves to the Americas.”

Dewulf draws upon a number of primary sources spanning from the sixteenth through the twentieth century. The range of sources the author aptly engages is quite impressive; from the works of São Tomé’s eighteenth-century Black historian Manuel do Rosario Pinto, writings by literary authors such as Lafcadio Hearn and George Washington Cable, to texts by religious leaders like the seventeenth-century Italian Capuchin Giovanni Francesco da Roma. The author uses these texts to explore the interconnectedness that occurred and continues to resonate today after the Portuguese and Kongolese first encountered one another in 1483. With such a breadth of accounts spanning over five centuries and various geographical regions ranging from the Kingdom of Kongo to Latin America, Dewulf compiles a convincing case that traces the performance of the Mardi Gras Indians back to the performance tradition of the sangamento, a “mock war performance” involving “spectacular leaps, contortions, and gyrations of the dancers.”

From the Kingdom of Kongo to Congo Square moves across the Diaspora, as Dewulf brings each chapter back to the context of New Orleans and the ways that the performance traditions still appear in the Crescent City today. To accomplish this, he uses New Orleans and Congo Square as his points of departure and return, focusing on how the syncretic moments of the past have led to the current incarnation of the Mardi Gras Indians. From the outset, Dewulf positions himself as countering scholars who posit that the Mardi Gras Indians and their traditions originated in the latter part of the nineteenth century. As a rejoinder, the author provides accounts from a German American in 1804 and the Swiss traveler Johann Buechler who visited New Orleans in 1813 and observed male dancers at Congo Square who “clothe[d] themselves in oriental and Indian dress with a Turkish turban of various colors.” 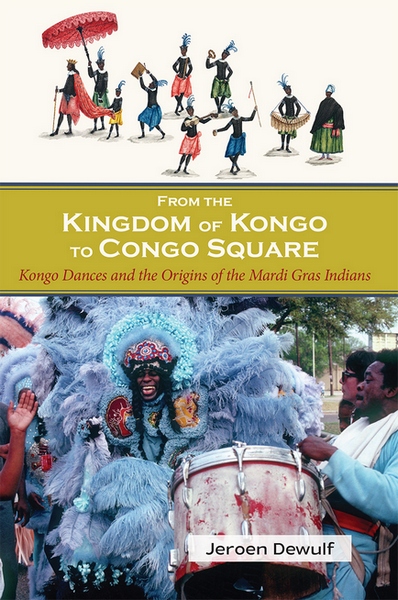 Beginning in the Kingdom of Kongo, Dewulf links elements of the sangamento to accounts of Black performances in regions from Suriname to Brazil to New Orleans. The rise of Catholicism in Kongolese culture brings about the next historical moment that Dewulf analyzes. Dewulf explores how elements of the sangamento begin to appear in Corpus Christi and Epiphany processions throughout the Diaspora, and how these processions become linked to mutual aid societies in Latin America, Haiti, New Orleans and elsewhere that worked to provide funds for the burial of enslaved individuals. The author’s exploration of these connections provides a detailed look at the melding together of African and European performance traditions that have shaped the Mardi Gras Indians to this day.

Dewulf makes it a point to highlight the fact that the appearance of Black performers dressing as Amerindians predates the latter part of the nineteenth century and occurred throughout the Diaspora. He traces this aspect, in part, to performances such as Moros y Cristianos (Moors and Christians) that took place to honor St. James. Inspired by Carolingian mythology, the “mock war play” presents a battle between the Moors and the Christians. The Moors appear to win at first, but the Christians counter and win, leading to the surrender and baptism of the Moors. These performances took place throughout the Diaspora, and in later generations, the Moors became Amerindians, specifically in Latin America. In some Corpus Christi and Epiphany processions, Blacks would perform as the diablitos, a role “that allowed the public display of African elements.” The diablitos would make ways for the floats as they passed through the streets. Just as the Moors would transform into Amerindians, the diablitos, as the centuries progressed, transformed as well.

From the Kingdom of Kongo to Congo Square concludes its historical trajectory with carnival and the movement of processions such as Moros y Cristianos and the roles of performers such as the diablitos from Corpus Christi and Epiphany celebrations to the carnival season. Here, starting before the Civil War and moving towards the end of Reconstruction, Dewulf explores the ways that Blacks used carnival as a way to subvert white supremacy, especially at the rise of the Mistick Krewe of Comus in New Orleans in the 1850s that sought “to put an end to racially mixed entertainment and show the black population its ‘proper place.’”  During the latter part of the nineteenth, the Zulu Social Aid and Pleasure club arose and the predecessors of the contemporary Mardi Gras Indians began to appear. Stemming from slave brotherhoods and mutual aid organizations, these groups pushed back, publically through their performances, against the racist positioning of those like the Mistick Krewe of Comus.

New Orleans authors such as Alice Dunbar-Nelson and Lyle Saxon chronicled this period in their works during the latter part of the nineteenth and early part of the twentieth centuries. Transporting the reader to the streets of New Orleans during carnival, Dunbar-Nelson, in “A Carnival Jangle” (1892), describes an image of revelers performing “a perfect Indian dance.” As the surrounding houses fade away in the revelry, the reader might even start to fancy him or herself “again in the forest, where the natives were holding a sacred riot.” Thirty-six years later, Lyle Saxon would describe a similar image in his book Fabulous New Orleans (1928). Saxon, describing carnival around the first of the century, notes that after the Zulu King passed in the street, he saw “negro men dressed as Indians with faces painted and head-dresses.” Dewulf uses texts such as these to highlight the fact that the Mardi Gras Indians have been a presence in New Orleans for over a century. As well, he uses these types of accounts, specifically Saxon, to highlight the continued “lack of awareness that made it difficult . . . to make sense of black performance traditions.”

Overall, From the Kingdom of Kongo to Congo Square is a very intricate study that challenges the ways we should think about the interactions between European and African societies. The author does not skirt the horrific elements of these interactions. Rather, they make up one aspect of a large tapestry tracing the movement of performance tradition from the Kingdom of Kongo throughout the Diaspora. Ultimately, Dewulf concludes that we must not “understand these parallels [across the Diaspora] as an uninterrupted historical continuum from the era of slavery all the way to the twenty-first century.” What these connections show, however, is that the performances of the Mardi Gras Indians were “built on elements that had once thrived in the contexts of slave brotherhoods” and the Kingdom of Kongo.

This book adds to our understanding of these syncretic moments that occurred between European and African cultures and how those moments continue to influence traditions today. Along with this historical understanding, From the Kingdom of Kongo to Congo Square cultivates a space for us to examine texts that either report on or use the Mardi Gras Indians in the narrative. In these spaces, scholars of the Black Diaspora can begin to better appreciate the dynamically layered cultural intersections embedded within performance traditions. We may never find the code of the Mardi Gras Indians, but through From the Kingdom of Kongo to Congo Square we are better able to understand and appreciate some of its most fraught components.