It is always fascinating to read historical accounts of the period you have lived through, or think you are familiar with, and Kennetta Hammond Perry has written a fascinating and well-researched history of post-war “immigration” to Britain from the Caribbean. Indeed, in London is the Place for Me, she goes further and highlights the fact that these “migrants” were in fact British citizens moving from Britain’s colonies to the metropole, where they were subject to a state racism that pre-dated their arrival but from the 1950s onwards took on new forms due to a variety of economic and political factors.

Perry analyzes some of the forces at play, highlighting the political reactions and necessary resistance organizations of the “migrants,” such as the Campaign Against Racial Discrimination, in the two decades following the arrival of the converted troopship Empire Windrush at Tilbury docks in 1948. As Perry recognizes and discusses, beginning such a history in 1948 can itself be problematic. The Empire Windrush was not the first post-war carrier of those moving from the Caribbean to Britain, nor did its arrival signal the post-war “mass migration” from the Caribbean that was to follow. Britain already had a population of Caribbean heritage, as well as many from the African continent. 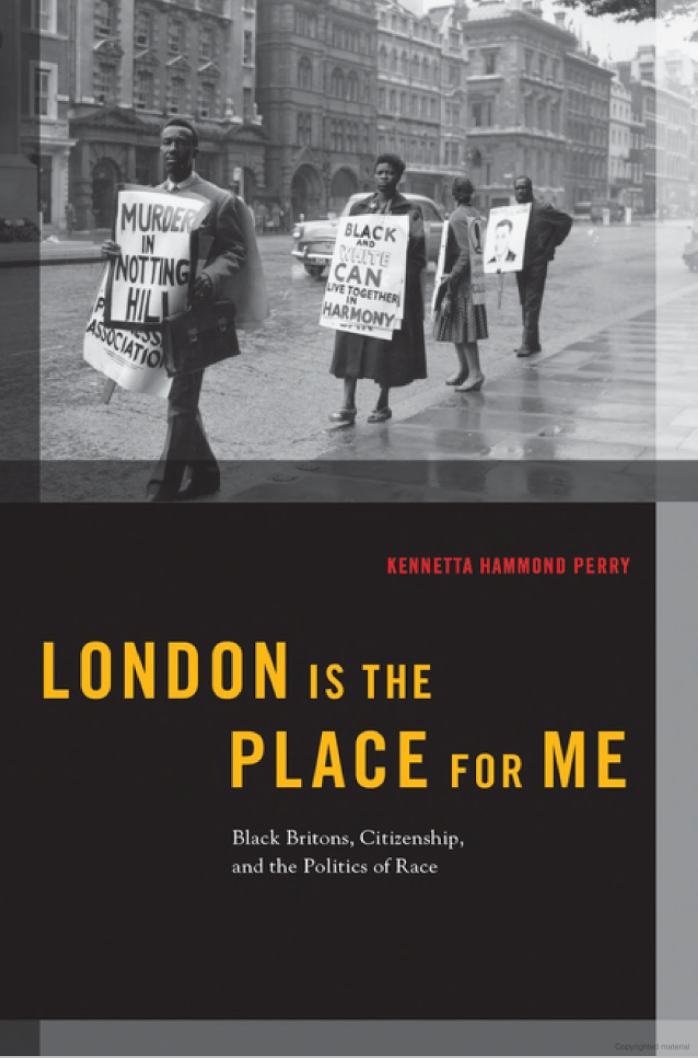 Nevertheless, the Empire Windrush has become iconic and is often invoked to perpetuate the myth that “Black British” history began in 1948 rather than over two thousand years previously. Perry takes the time to present some key aspects of this earlier history in the pre-war period. Today those who might be referred to as “Black Britons” mainly originate from the African continent, but this connection has hitherto remained largely ignored in the scholarly literature. However, terms such as “Afro-Caribbean,” although once ubiquitous, can be rather confusing in the British context and at various times Perry also includes mention of those “Black Britons” from Africa who often shared similar experiences as those from the Caribbean.

The dating of this post-war history from 1948 can be more usefully connected with the British Nationality Act of that year, which Perry discusses in some detail, as a necessary measure in the post-war transition from the old reality of the British Empire to the new and enduring myth of the British Commonwealth. Another aspect of the act which endures is the deliberate confusion that has been created in Britain between the concepts of “citizenship” and “nationality,” and the racist notion that some people are more British than others.

It is often said that those who migrated from the Caribbean to Britain in the immediate post-war period considered themselves British but were often not considered so by the legislators, press, and others who considered them to be immigrants. However, the children of these “migrants,” often born or growing up in Britain, did not consider themselves British or immigrants. Only in the last thirty years has the term “Black British” been more fully embraced, but “Black Britons” is rarely used, or accepted, as an expression of self-definition.

Perry does a good job of analyzing some of the causes of the violent racist attacks of the late 1950s in Nottingham and London’s Notting Hill and placing them within some context. As she points out, these were not the first large-scale racist attacks—there had been many, including the attacks that occurred in British towns and cities in 1919. It can be argued that all such attacks are organized and the conditions are created by the press, police, and other state agencies, as well as openly racist and fascist organizations. Certainly, as Perry observes, the attacks in 1958 were used as a means by government to label “migration” as the source of a problem that had to be contained by immigration control, while racism was blamed on the entire population and provided the justification for “race relations” legislation and an entire apparatus which created further confusion concerning its source.

Perhaps the most interesting parts of Perry’s book concern the organized responses and resistance of “Black Britons” to the situation they faced in Britain. Racist violence, such as the murder of Kelso Cochrane in 1959, was almost universally condemned and led to united responses of those from Africa, Asia, and the Caribbean, as well as the involvement of veteran activists such as Amy Ashwood Garvey and Claudia Jones.

As Perry relates, this was a period in which new coalitions uniting those of African and South Asian origin were established and directed their energies not only to problems of racism in Britain but to wider international anti-imperialist struggles. It was these coalitions that gave rise to the Campaign Against Racial Discrimination, formed following Martin Luther King’s visit to London in 1964 and as the new Black Power era dawned in Britain, which is the focus of Perry’s final chapter.

Overall, this is a well-researched scholarly work that adds to the existing and growing literature on post-war “Black British” history. Hopefully, it will lead to more research in this area from Perry and other emerging scholars in Britain and elsewhere.