*This is the second post in a new blog series on Women, Gender and Pan-Africanism edited by Keisha N. Blain. Blog posts in this series will examine how women and gender have shaped Pan-Africanist movements and discourses of the nineteenth and twentieth centuries in the United States, Europe, Africa, Latin America and the Caribbean. In this post, historian Denise Lynn explores the feminist vision of Pan-Africanist intellectual Claudia Jones. 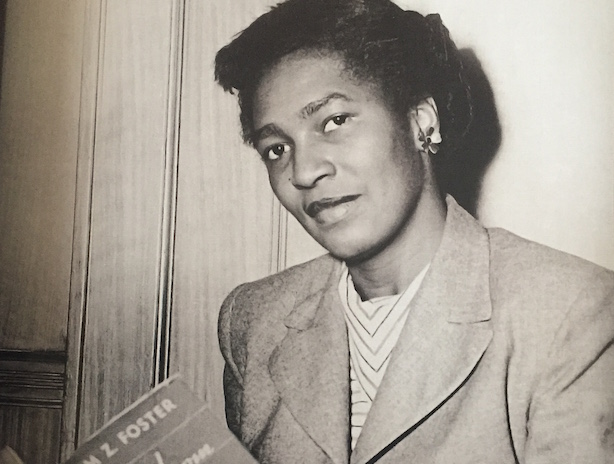 Claudia Jones’s contributions to Pan-Africanist thought and Black Nationalism are well documented. Once lost to activists and academics, scholars are beginning to unearth Jones’ contributions to both the American and British Left during the Cold War and the personal price she paid, including deportation from the United States and leadership conflicts within the British Communist Party.

Nevertheless, she persevered in pushing a largely white Communist Party to consider not just Black Nationalism, but the integration of Black women into Black Nationalist thought. She argued to Party leadership that its focus should not be on the white male industrial worker; rather the Party should focus on the most oppressed and most exploited—Black women.

Jones did this by constructing the most sophisticated understanding of Black women’s triple oppression to date. She emphasized that in order to free all working people, the most oppressed had to be freed first. This did not go over well among many dogmatic Marxists in the Communist Party leadership, but it never stopped Jones from pushing for further acknowledgement that Black women’s triple oppression preceded that of the male industrial worker’s oppression.

What has been lost in studies about Jones is her contribution to feminist thought. While her understanding that Black women’s triple oppression preceded all other forms of oppression may have been controversial, what she formulated was a universal emancipatory politics that would free all women and all workers and all humans from the shackles of capitalist, racist, and sexist oppression. She accomplished this by arguing that true freedom lay in the demolition of class, race, and gender oppression. What better way to do that than to focus on the emancipation of the group that suffered from all three. Thus by freeing black women, you would free all women, and by struggling to free the most downtrodden, all would be freed. Jones’s theory of socialist feminism was a universal idea for global emancipation.

Jones’ socialist feminist thought was grounded in the differences among women; this was essential in her understanding of how oppression operated. White women were certainly oppressed, especially white working-class women. However, they still garnered certain racial privileges that could be beneficial in the competitive workforce where women vied for low-wage jobs. Additionally, Jones believed that white women could never know true freedom until Black women were emancipated. Thus, they shared a common interest and investment in Black liberation and that white activists should embrace Black Nationalism.

Her most important and famous work is the 1949 text, “An End to the Neglect of the Problems of the Negro Woman.” In this essay, she chastises the Party for its failure to recognize Black women’s oppression and effectively organize against it. But as early as 1945 she made a name for herself in the Party during an internal struggle over whether Black Nationalism was contrary to Marxist-Leninist thought. Jones argued that rather than dividing the working-classes, Black Nationalism was a means to unify the masses. Race was a tool used to divide the working-class against itself and urging white workers to embrace Black Nationalist thought was one means of unifying the working-class against its oppressors. Jones, while a devoted communist, remained keenly aware of Marxism’s shortcomings in integrating race and gender into its strict class analysis. This is precisely why Carole Boyce Davies describes her as left of Karl Marx—because she pushed Marxist dogma and its adherents to recognize social oppression.1

In 1948, Jones insisted that the Party needed to find “new approaches” to address women’s issues in her essay “For New Approaches on the Woman Question.” It is this article where she most clearly articulated her understanding of difference feminism. While the Party was considering an “anti-monopoly and peace coalition against American Imperialism,” she encouraged it to also address the “special” needs of women.  She argued that women could play a “decisive role” in the “political life in the nation” and that the Party had to make organizing women a priority. While capitalists recognized the power of women as consumers, Jones argued that the Party needed to see women as producers as well.2

She specifically attacked the notion that was propagated by “Wall Street Imperialism” that “women’s place is in the home.” This is used, she claimed, to obscure the “many” inequalities in the “social position of women.” While she noted that women had “two strikes” against them in competing for jobs in the competitive postwar environment, the reality was that these “employment difficulties” were “falling most heavily on Negro women.” Black women were the first to be fired from wartime jobs and forced back into low-paying domestic positions where they served white families rather than their own. Jones insisted the Party had to recognize that women faced the loss of wartime work and the continued neglect of labor unions—the very institutions the Party sought to influence. But Black women were forced back into menial positions in white homes, and their own families’ needs were expected to take a lower priority.3

Jones also pushed the Party to look beyond shop-floor politics toward the working-class home. In this way, women would be drawn to the Party around workplace and social issues. She expressed concern that, after the war, nursery programs had been “cut down to a minimum” if not altogether dismantled. Jones saw this as another attempt to push women into the home. Additionally, inadequate services to address the medical needs of their children and the poor state of many schools were “burning issues” for American women.4

Jones encouraged the further establishment of programs to reach out to women including regional theoretical training schools, daytime classes, and “babysitter” funds. But the Party also had to recognize the unique role of Black women in the movement. While white cadres could be lured in with social programs, Black women were the leaders in the struggle for Black equality. Therefore “greater attention to the triple handicaps of Negro women” could help to build “Negro and white unity.” The political demands of Black women went beyond simple babysitter funds.5

It was in her famous article “An End to the Neglect of the Problems of Negro Women!” that Jones offered a clear and concise analysis of what the differences among women meant for the liberation of all women. The most important difference to Jones was that Black women were historically the “guardian, the protector” of the Black family and thus when they seek to “undertake action” it has radicalized “the whole Negro people.” Black women historically prevented the “wiping out of the Negro family”—a step far beyond the struggles of white working-class women who faced real struggles, but not from a violent and exclusionary state apparatus supported by social customs that sought the destruction of the Black family. While “Wall Street Imperialists” boasted that women’s equality in the United States had no equal, Jones argued that when it came to “Negro and working-class women” that “boast stops at the water’s edge.” But the “degradation and super-exploitation of the black woman” especially highlighted the farce behind women’s so-called equality.6

Black women were more often in the workforce because of the low wages of Black men. They were “confined to the lowest-paying jobs” and made “less than half” of what white women made. They were also often the sole breadwinners in their families. Thus for Jones, in order to advance the “progressive women’s movement,” it was the Black woman “who combines in her status the worker, the Negro and the woman” that became the “vital link” to “heightened political consciousness.” This was Jones’ most important contribution to socialist thought, but more important, she offered an inclusive emancipatory politics for feminist thought as well. For women to gain true emancipation, it could not happen without the liberation of Black women. Though this made Jones controversial within the Communist Party, it was a contribution that would later be taken up by Black feminists like the Combahee River Collective. What would be truly revolutionary, however, would be for white feminists to embrace Jones’ belief that black women’s freedom meant freedom for all.7

Denise Lynn is an Associate Professor of History at the University of Southern Indiana in Evansville, Indiana. Her articles have appeared in American Communist History, Women’s History Review, Journal for the Study of Radicalism, and The Journal of Cold War Studies. Follow her on Twitter at @DeniseLynn13.