By Ashley Dennis October 8, 2020 Comments Off on Mapping a Plan for Reparations in the Twenty-First Century

As the U.S. reckons with systemic racism in the wake of global protests over the murder of George Floyd, Breonna Taylor, and Ahmaud Arbery, reparations for Black people has resurfaced as a part of the solution to racial injustice and has gained support at unprecedented levels in modern history. The city of Asheville, NC recently joined Evanston, IL in approving reparations for its Black residents, while places such as Seattle, WA; Providence, RI; and the state of California consider implementing reparation programs. Thus, From Here to Equality: Reparations for Black Americans in the Twenty-First Century is a timely and vital contribution to national discussions about reparations. William Darity, the Samuel DuBois Cook Professor of Public Policy, African and African American Studies, and Economics at Duke University, and Kirsten Mullen, a writer, folklorist, museum consultant, and lecturer, force readers to confront how anti-Black racism has and continues to impede the financial well-being of African Americans and provide a blueprint for addressing these injustices. More specifically, they base their demand for reparations on the egregious injustices of slavery, Jim Crow, and ongoing systematic racial inequality in housing, education, police brutality, mass incarceration, employment discrimination, and prodigious wealth and opportunity gaps.

From Here to Equality is divided into six parts. Darity and Mullen first present a political history of the Black reparations movement in the U.S. and highlight the current wealth gap between Black people and white people. They then provide a cogent historical overview of the grave historical injustices, from slavery to the present, that led to the wealth gap. The authors demonstrate that the nation had the opportunity to right its wrongs against Black people at numerous junctures throughout history, but instead the country intentionally prolonged their economic exploitation and oppression. The authors then tackle common criticisms of reparations and outline a concrete plan for its execution to solve the wealth gap. Throughout the book, references to reparations claims, or settlements in different contexts, support their argument that reparations are not only necessary and feasible but also have precedents. This includes the U.S. government’s allocation of reparations to Japanese Americans wrongfully imprisoned during World War II and the German government’s provision of reparations for Nazi Holocaust victims.

Darity and Mullen’s most significant contribution to the literature on reparations is the final section of the book where the authors compile and respond to the most common concerns about reparations and provide a detailed plan for its implementation. They provide concise, insightful rebuttals to dismissals of reparations, most of which are drenched in racism, in a clear question and answer format. For example, in response to the ignorant assertion that Black people “have already received reparations in the form of an abundance of welfare monies and funds from other social programs,” Darity and Mullen point out that social programs were initially designed in the 1930s to exclude black people (264). They dispense with the myth that Black people make up the majority of recipients of federal aid. Moreover, they argue that the purpose of benefits was not to solve historical and contemporary injustices against Black Americans. In response to those wondering about reparations for Black immigrants or other minority groups, the authors reiterate that the book’s objective is to offer reasons for reparations for Black Americans. “We have no doubt,” they assert, “that other groups may have legitimate claims, and we urge them to bring forward their cases” (250). 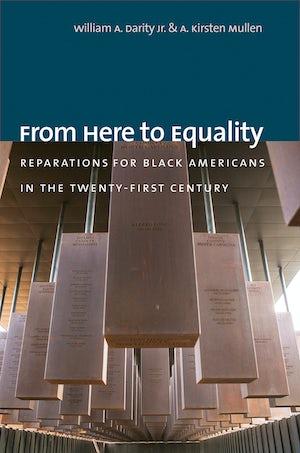 Darity and Mullen take their scholarship one step further by providing a detailed reparations program for Black Americans. They address the program’s essential factors, including who should pay, who should receive, the quantity of the debt owed, and how the plan would work. Darity and Mullen argue that the federal government, not individual perpetrators, are responsible for payments because the entire political order “bears responsibility for sanctioning, maintaining, and enabling slavery, legal segregation, and continued racial inequality” (257). Given that broad popular support is necessary for the successful implementation of reparations, they posit that the U.S. Congress is best suited to govern the program. The legislative branch should begin with establishing a commission that examines the history of racial injustice in the U.S., the findings of which could be salient in garnering broad support for the reparations project. They note that Congressional approval of H.R.40, which calls for a congressional commission to examine slavery and its intergenerational impacts and determine the practicality of restitution, could be an important step towards reparations.

Regarding eligibility, the authors argue for two criteria. One, eligible participants have to be U.S. citizens who can prove that they had at least one ancestor who was enslaved in the U.S. after its founding. Two, eligible participants also have to present documentation that they identified as Black at least twelve years before either the start of the reparations program or the creation of a congressional or presidential reparations commission, based on which initiative comes first. The second criterion would prevent people who spent their life ‘passing’ for another racial group from taking advantage of the benefits of the program. These are helpful starting points; however, several questions remain. For example, who would pay for the genealogical research required for Black people to prove their eligibility? What about gaps in the archive? Are formerly enslaved and freed people in the U.S. who migrated to other countries, including Liberia, Canada, and Ghana, to escape racial violence in the U.S. ineligible for restitution for wealth stolen from their ancestors during slavery and the Jim Crow era?

Because the authors regard the racial wealth gap as “the most robust indicator of the cumulative economic effects of white supremacy” in the U.S., they favor economic models that determine the monetary value of reparations based on the racial wealth gap. These estimates put the financial portion of the reparations bill at $10.7 trillion, or an average payment of approximately $267,000 per person for 40 million eligible descendants of enslaved Americans.

Darity and Mullen offer several options for reparation outlays. Their suggestions include bolstering endowments for historically black colleges and universities, creating vouchers for buying financial assets, or establishing a trust fund to which eligible Black people could apply for grants for a variety of asset-building projects. Such projects could include additional education, homeownership, or start-up funds for entrepreneurs. A team of trustees, selected by an elected twelve-member supervisory board, would decide which proposed asset-building projects could receive funding. Additionally, Darity and Mullen propose the establishment of the National Reparations Bureau as the civil service agency that oversees the quotidian implementation of the program. The agency’s responsibilities include collaborating with the General Accounting Office to “ensure the financial fidelity” of the program as well as working to educate and raise the national consciousness about the history of race in the U.S. through a variety of efforts. This includes new plaques or markers that commemorate people who were at the forefront of racial justice activism and commemorate white supremacist terror victims. They also advocate using funds to install new markers for statues and buildings named after leaders of the Confederacy and the Lost Cause movement to tell the truth about these figures involved in the fight against both the country and the opportunity for Black people to exercise their democratic rights after the Civil War. The authors also posit that funds do not have to be dispersed in one lump sum but could be paid overtime, which would help prevent inflation. The authors also present a plan that would not lead to tax increases. Whatever the strategy employed, Darity and Mullen argue that reparations must close the wealth gap, and it must include direct payments to all who are eligible.

If there are weaknesses in From Here to Equality, it is an overestimation of reparations for Black Americans as the panacea for white supremacy instead of as one essential tool in the toolbox required for its dismantlement. This is especially true, considering that all Black people in the U.S. would not benefit from their proposed reparations plan. Nevertheless, the breadth of their historical research and depth of their policy proposals make this book a compelling resource for anyone interested in reparations, and the history and legacy of anti-blackness in the U.S.

Ashley Dennis is a Ph.D. candidate in the Department of African American Studies at Northwestern University. She researches US history, specifically Black women educators in Northern cities during the mid-twentieth century.