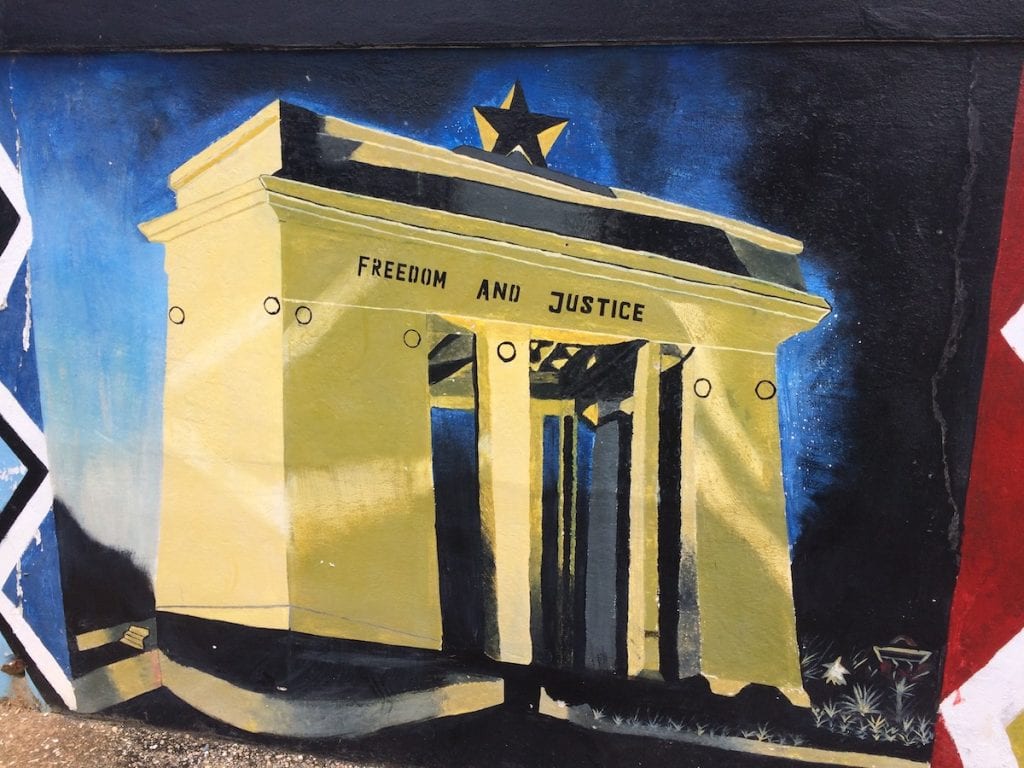 We have heard a lot about decolonization over the last few years. From curricula, to science, to Hollywood blockbusters, to curating — few institutions have escaped the pervasive demands for the recalibration and reconfiguration of hitherto established norms and practices. There has also been a surge in writing about post-colonial African history during this period, but what does decolonization actually mean in practice? To generalize, this scholarship revisits the praxis of post-colonial African history to revise tired stories about nationalist decay, corruption, state-failure and extraversion, in favor of more nuanced accounts of the quotidian work that went into (re)making the world after empire. Ghana has been the prototype for both the romanticized  drama of decolonization and the narrative of post-colonial decline. Both narratives are true, to a certain extent, but as Jeffrey Ahlman reveals in his book, Living with Nkrumahism: Nation, State and Pan-Africanism in Ghana (Ohio University Press, 2017), decolonization also meant dramatic changes in gendered regimes, social identity, work, labor and belonging, manifest in citizens daily lives. His is a rich account, generated from oral histories and creative use of disparate archives.

Dan Magaziner: You argue that historians and popular memory have failed to account for the ways in which Nkrumahism was an ideology and praxis coherent enough to constitute the “epistemological backdrop” for millions of Ghanaian lives during the 1950s and 1960s. What is gained by exploring the lived experience of Nkrumahism? How does this help us better to understand this era and movement? Why should we endeavor to do so?

Jeffrey Ahlman: One of the most challenging things that I think historians and Africanists more broadly face in reflecting upon decolonization-era politics in Africa is a tendency to look back to the era in a search for political and ideological purity. As such, in the Ghanaian context, key questions driving studies of the era have often tended to be those of whether Nkrumah succeeded or failed, or whether he was good or bad for Ghana. For instance, for liberal scholars, the result was a set of studies analyzing the decline of participatory democracy in Ghana over the course of the 1950s and 1960s, while, for Marxist scholars, the discussion often tended to examine how the Convention People’s Party’s supposed bourgeois nationalism and the corruption within the party/state failed to adequately address the class inequalities within the country. However, what tends to get lost in these discussions of decolonization-era Ghana — and I’d argue most of Africa more broadly — is a clear reflection on the broader contexts in which postcolonial leaders like Nkrumah operated and constructed their worldviews and, even more importantly, how those they governed related to and made sense of these worldviews.

In Ghana, Nkrumahism as an ideology was fundamentally a moving target, meaning the exact philosophical and ideological dimensions of what was referred to as Nkrumahism changed over time as the realities of Ghanaian and African decolonization changed. However, Nkrumahism did tend to hold to a general set of principles connected to pan-African anti-imperialism and socialist development and nation-building that in differing forms made their way into Ghanaian policy, institutions, and life, forcing Ghanaians — in some cases willingly and in others not so willingly — to confront this new ideology as it intersected with their lives.

The intellectual history of Nkrumahism, I thus argue, is not solely — or even primarily — a history of Nkrumah’s thought. Rather, I contend that, for historians, a much more important history is a history of how this thought intersected with everyday life. Such a framework not only adds more nuance into our conventional understanding of decolonization-era African history and politics, but it also helps to reframe and democratize what we mean by African intellectual history. Moreover, such a history is one committed to understanding how ideas were transmitted — in the case of Nkrumah’s Ghana, through state institutions, the press, schools, worker petitions, and word of mouth, among other sites — and consistently renegotiated to serve an array of individual and collective purposes that, in some cases, did not even indirectly adhere to the explicit ambitions of the Nkrumahist state per se.

Ultimately, why historians should engage in such work is that such a picture of African intellectual history broadly and Nkrumahism specifically foremost decenters the normative, social scientific questions of success/failure or good/bad in African decolonization-era history and, in doing so, it re-centers the political and intellectual innovation of a wide array of differing groups of people at the heart of the decolonization and nation-building process, while also taking full account of the changing local, national, and international contexts around them.

Magaziner: I read this book soon after finishing Yuri Slezkine’s magisterial study of the Bolsheviks, The House of Government. Taken together, both studies uncover the essentially “religious” aspects of post-revolutionary societies, which were post-conversion societies, in their millenarianism, their aspirations to undo generational hierarchies, constitute new communities, etc., etc. As you note, Nkrumahism was in many ways comparable to Julius Nyerere’s Ujamaa in Tanzania, and to contemporary efforts in Sekou Touré’s Guinea. What is gained by thinking comparatively about such efforts? Flip-side: what was specifically Ghanaian about Nkrumahism?

Ahlman: Comparative and transnational frameworks are essential for histories of African decolonization. It is important to remember that all the individuals you mentioned — Nkrumah, Nyerere, Touré, plus Nasser, Ben Bella, Modibo Keita, and many others — were constantly talking with one another, looking to each other’s countries for ideas on what to try and what not to try. Moreover, each was also looking globally and seeking to set up political and intellectual links far beyond Africa’s borders. Thus, attempts to dislocate these transnational connections and networks from studies of Ghana’s, Guinea’s, Tanzania’s, or most any other country’s independence during the 1950s and 1960s not only misses a key part of the historical narrative, but they also fundamentally compartmentalize the history of African decolonization in a way that negates the collective vibrancy, ingenuity, and innovation of this moment of political imagination.

The question of what was uniquely Ghanaian about Nkrumahism is thus a difficult one given that Nkrumah and the CPP adopted widely — from Ghana itself, Africa more broadly, the black radical tradition in the West, and the Soviet Bloc, among other locales — in their efforts to bring together what ultimately became defined as Nkrumahism.

With that said, what I attempt to show was unique about Nkrumahism was the interactive process by which the CPP and the populace negotiated the implementation of these ideas into key parts of Ghanaian life. Nkrumah and the CPP never had a blank slate in their attempts to realize their political vision in the country. Rather, as I suggested above, Ghanaians more broadly not only contested key aspects of this political vision (the pan-Africanism, the socialism, the infrastructural development, etc.), but transformed and utilized it to meet their own needs: class, educational, generational, gender, labor, etc. In doing so, what emerged was a vibrant political dialogue that opened and closed as the political realities in Ghana and Africa changed — a dialogue in which many Ghanaians sought to integrate the language of Nkrumahism into often longstanding political and cultural norms or read it against these norms.

Magaziner: Along the way, your study picks up so many of the major themes that have come to mark the best of recent African historical scholarship, notably the knotty theme of “modernity,” and unfolding, evolving concepts of gender. How did the CPP imagine itself to be modern? How did this intersect with its efforts to gender future generations of Ghanaians? Could you discuss this by reference to the Builders Brigade, Young Pioneers and other institutions associated with the CPP?

Ahlman: For the CPP, the question of what it meant to be “modern” stood at the center of the party’s and state’s vision for the new country and, by extension, continent. As anthropologist James Ferguson has pointed out, much of the scholarly debate around modernity or modernities has little resonance on the continent. In this sense, CPP-era Ghana was no different. Much like in Donald Donham’s discussion of revolutionary Ethiopia, the CPP tended to think of modernity in terms of a ladder upon which Ghana and the continent at large had to climb. As understood by Nkrumah and much of the CPP, this metaphorical climb most visibly meant a commitment to industrialization, new infrastructural projects, civic order and discipline, and at least an expression of a commitment to gender equality. Socialism was thus at once to accelerate this climb, while also ensuring that it was embarked upon in the most equitable way possible. Likewise, pan-Africanism promised that this climb would not only be Ghana’s, but would be one that lifted the entire continent.

However, there is a more important point to be made when discussing the CPP’s conception of the modern. For the CPP and especially Nkrumah, Ghana’s modernization could not be disaggregated from the decolonization process. Not dissimilar to Fanon, this process of decolonization was envisioned as a process that would encompass nearly every aspect of Ghanaian life (i.e. in terms of class, generation, gender, family, ethnicity, and more), transforming the individual, her or his community, and the nation and continent as a whole. At least on this point, I think Nkrumah would agree with Frantz Fanon’s assessment that “Decolonization is the veritable creation of new men.” As such, state institutions — most famously the Ghanaian Builders Brigade and the Ghana Young Pioneers — constructed a set of civic programs foremost aimed at freeing the “new” Ghanaian from a past that the party defined as colonial and paving the way for her to embark on a future that was at once modern, African, and liberated from the exploitative legacies of colonial rule. For Nkrumah and the CPP, this vision of the future was what laid at the heart of modernity, for with this decolonized modernity came the dignity implicit in Africans taking their place as equals in the emerging post-World War Two international community.

*Republished from ‘Kwame Nkrumah and decolonial imagination‘ (Africa is a Country)