Earlier this year, NBC journalist Chuck Todd pressed  the Counselor to the US President, Kellyanne Conway, to explain spurious claims made by then White House Press Secretary Sean Spicer. The interview quickly intensified as Todd submitted that Spicer told lies that undermined the “credibility” of the White House. Conway responded that Spicer offered “alternative facts” that might not align with the mainstream press. Todd immediately denounced the explanation, asserting that “alternative facts” were nothing more than “falsehoods.”

Unsurprisingly, the phrase did not die with the single interview. Cartoons, memes, and hashtags parodying Conway’s remarks soon descended upon social media in stunning fashion. Clever wordplay ensued as comedians and other entertainers applied “alternative facts” to various daily realities. Comedian and late night talk show host Jimmy Kimmel quipped: “I wish I would have known about alternative facts in high school, I would have had straight A’s.” For journalist Dan Rather, however, the administration’s blatant lies, even in the face of evidence, seemed far more harrowing. Rather suggested that it was an “Orwellian phrase” that represented the United States’ entry into an extraordinary time of political fabrications disseminated by an incompetent administration.

The media spectacle was understandable. From a historian’s perspective, however, the “alternative fact” is deeply embedded within American social and political discourse–especially as it relates to African American history. Collins English Dictionary provides two ways to define it: (1) a theory posited as an alternative to another, often more widely accepted, theory; (2) (facetious) a statement intended to contradict another more verifiable, but less palatable, statement.

In either definition, one finds that such ideas are rooted in North America’s historical memory of slavery. As early as 1866, Edward A. Pollard’s book The Lost Cause: A New Southern History of the Confederates claimed to present “a severely just account of the War” to contend against the “false schools of public opinion” unsympathetic to the US South. Pollard’s thesis was quite persuasive. Generations of white southerners believed their ancestral war against the North was noble, and they suspected those outside the region were deliberately misrepresenting their history.

Though advocates for the “Lost Cause” referenced slavery, scholars note that white southerners’ nostalgic presentations of masters and slaves more specifically align with a concept termed the “Plantation Myth.” This polemic asserted that the antebellum South was a picturesque, agrarian region untouched by the evils of industrial capitalism. In this idyllic past, enslaved people were content in their bondage and enjoyed the benefits of white Christian civilization under the careful tutelage of the master class. Nostalgic whites and their descendants believed such stories were intentionally suppressed throughout the United States, and specifically requested that those who lived during the antebellum period document their reflections for future generations. Writing to the Confederate Veteran, reader Manly Curry worried that popular representations of slavery only portrayed its “dark side,” replete with images of the overseer’s whip and the terror slaves attached to the “bay of the bloodhound.” Curry proposed that pro-Confederate publications could rescue the South’s reputation by detailing slavery’s “bright side,” showcasing how slaves “enjoyed life” with activities like corn shuckings, barbecues, and weddings. Curry encouraged the magazine to publish variations of the Plantation Myth that directly countered the “more widely accepted” narrative of southern slavery. He was, essentially, calling for the propagation of alternative facts. 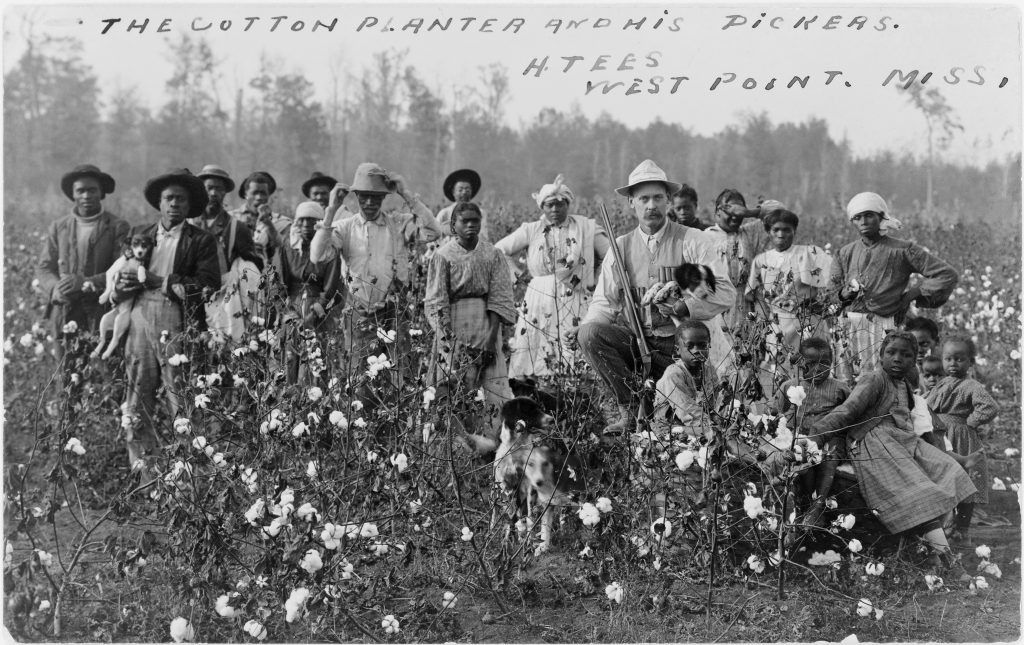 Plantation myths certainly fulfilled the nostalgic southerner’s desire for a different narrative, often using individual anecdotes as evidence for the entire culture of slaveholding. For instance, former plantation mistress Margaret Deveraux asserted that her 1906 memoir was “strictly true” because her firsthand experience on a North Carolina plantation gave her “knowledge of facts.” Similar assertions are found throughout the contemporary literature. Louise-Clarke Pyrnelle wrote in her 1899 children’s book Diddie, Dumps, & Tot; or, Plantation Child-Life that she was “surrounded by negroes from my earliest infancy, [therefore] I KNOW whereof I do speak.”1 Of course, these works portrayed slavery as a benign institution predicated on the mutual needs of whites and Blacks. H.S. Fulkerson asserted that between 1836-1850 slavery in Mississippi was “as mild in its form as was consistent with the efficiency of the slave and the welfare and safety of two races.”2 Whether documented for public or private consumption, the elders’ recollections solidified the descendant community’s needs to positively commemorate their ancestors.

As noted in Manly Curry’s letter, plantation mythology usually highlighted special events that occurred throughout the year. Slave weddings were an especially popular apologetic, as they manifested the purported interracial comradery of antebellum race relations. In these ceremonies, white masters and enslaved laborers shared a celebratory space that fulfilled the advertised goals of racial slavery. Former plantation mistress Anna Hardeman Meade claimed that masters officiated the ceremony, drawing testimony from an enslaved woman named Aunt Ellen: “I wants Marster ter marry me…I ain’t studdin’ none er you nigger preachers!”3 The ceremonies were represented in spectacular form, displaying ornately dressed brides, grooms, and attendees, alongside an abundance of food, decorations, and the “hilarity” that whites associated with slave dances and music.

The plantation myth proved especially popular for many Americans a few generations removed from the Civil War, but such ideas did not go unchallenged. Black scholars like W.E.B. Du Bois and E. Franklin Frazier combated the stereotype of happy, content slaves who willingly labored for their masters and enjoyed familial stability. In The Negro American Family Du Bois condemned slavery’s impact on the Black family, arguing that the “great body of field hands were raped of their own sex customs and provided with no binding new ones.” Similarly, Frazier contended American slavery was an especially demoralizing institution that devastated the structure of Black families. Though both men eventually gained prominence in the fields of Sociology and Black Studies, their ideas failed to penetrate contemporary American popular culture.

Conversely, Margaret Mitchell’s 1936 novel Gone with the Wind romanticized the southern plantation and portrayed the Confederates as honorable soldiers who went to war for their region. The novel convinced many white Americans that the antebellum South represented a simpler era that was supposedly devoid of the racial tensions characterizing the early twentieth century. Even beyond popular culture, white scholars in the early twentieth century were also complicit in sympathizing with slave owners. In his book An Old Creed for the New South, John David Smith notes that by 1918, a year many historians consider part of the “nadir” of Black American life, white historians were producing studies of slavery at unprecedented rates. Though many works were well-researched, Smith argues the “vast majority of white historians championed some variant of the old proslavery argument.”4 Even if slavery remained unpalatable for most people, the Plantation Myth reassured them that North American slaveholders deserved their sympathy. Predictably, such myths still hold remarkable staying power.

The recent debates surrounding Confederate monuments suggest that the United States is still reckoning with the ghosts of the Old South. Though it is easy for some to scoff at “alternative facts,” and dismiss them as fringe ideas espoused by an angry minority of white Americans, writer Christopher Ingraham reveals that most Americans believe the monuments are simply expressions of southern heritage. Ingraham suggests that one’s political alignment, race, and age informed their perception of the monuments, not their region. Historian Tiya Miles explains this dynamic by arguing that racial injustice was not confined to the former Confederate States, but the legacies of slavery and anti-Black violence “penetrated every corner of this country, materially, economically, and ideologically, and the unjust campaign to preserve it is embedded in our built environments, North and South, East and West.”

The Plantation Myth’s historical popularity exposes the danger in casually dismissing opposing narratives, however ridiculous they may appear. In hindsight, its historic prominence provides a blueprint for how historians can approach the rise of alternative histories. Scholars must use public arenas to address, and contend against, bad ideas. If left unchallenged, the alternative facts of American slavery could, once again, obtain significant popularity.

Comments on “Slavery, the Plantation Myth, and Alternative Facts”