Reading W.E.B. Du Bois’s The Black Flame trilogy in the months after the June 17, 2015 massacre at Emmanuel AME Church in Charleston, South Carolina, I was taken aback when I came across the name of the historic church in the text. I suppose I had seen it there before, but this time it came into sharp focus. In the first novel of The Black Flame trilogy, the hero, Manuel Mansart, is born near Mother Emmanuel while his father, Tom Mansart, a labor organizer and Reconstruction politician in the South Carolina state legislature, is lynched by a white mob on the church’s front steps.

I thought about the connections between the novel and the Charleston Massacre, and the role of free black institutions like Mother Emmanuel in the history of American white supremacy. Du Bois named his main character Manuel as a tribute to that church and its history, signifying Manuel Mansart’s prophetic-heroic role in the epic narrative of black life in America (and beyond) stretching from 1876 to 1954. The church, and what it represents, is an important element in The Black Flame’s narrative about white supremacy and the struggle for black education in the post-Reconstruction years in a state that was, in 1861, the first to secede from the Union. Mother Emmanuel, a bastion of independent, educated, free black people since 1816, has always been an institution of refuge in that violently racist state. Throughout all of his novels, and other writings, Du Bois repeatedly invokes the white supremacist’s disdain for over-educated and self-confident black people.

W.E.B. Du Bois was attentive to the racial dynamics of American life in the sociological and historical work that he is best known for, including The Souls of Black Folk (1903) and his masterful Black Reconstruction (1935). But he is not commonly known as a novelist. Few people realize that his extensive bibliography includes five published novels. The Quest of the Silver Fleece (1911) and Dark Princess (1928) came earlier in his career. In his last years he composed the three books that comprise The Black Flame trilogy, including The Ordeal of Mansart (1957), Mansart Builds a School, (1959), and Worlds of Color (1961). These latter works represent the last energy of a ninety-five year life of scholarship and activism. 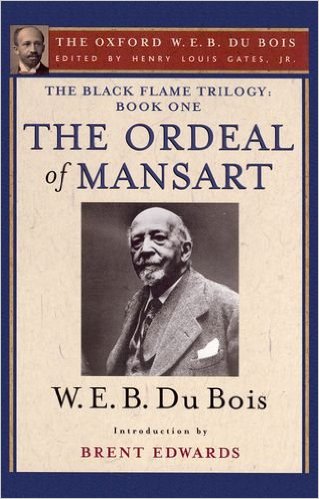 “It was October 1876…” begins the opening lines of the first volume of the trilogy, The Ordeal of Mansart, marking it as a story that begins at the end of Reconstruction. Tom Mansart (Manuel’s father), a black Reconstruction politician, is on his way to a meeting at the home of the wealthy South Carolina planter Colonel Breckenridge. The way Breckenridge describes this black man approaching his home as “probably one of those half-educated darkies who were misleading and befuddling the bewildered Negroes,” signifies the feelings of many white Southerners about these new, uppity black leaders (The Ordeal of Mansart, p. 3). Colonel Breckenridge is outraged that men who were formerly enslaved were now sitting in the same chambers that Calhoun, Rutledge and Pinckney sat. It is striking that the name Pinckney appears in The Black Flame and that the white South Carolina political patriarch Charles Pinckney and his family held the same distinctive last name as one the Charleston shooting victims, the black South Carolina state representative, Clementa Pinckney.

In the hours after his meeting with Colonel Breckenridge, Tom returns to Charleston to find that the Ku Klux Klan has instigated a riot. He also finds that Mrs. Breckenridge has made an unexpected visit to Tom’s mother-in-law Aunt Betsy, and his wife Mirandy, and was stuck there in the mayhem. In order to escape the white mob, Tom either had to send the Colonel’s wife off by herself, or he must go with her and try to protect her. “If he deserted her she would turn against him and his plans and her husband would certainly be his enemy. She might even be killed deliberately – even here in the city, – and her murder placed at his door. On the other hand, it was dangerous to drive openly into the very center of the city tonight with a planter’s wife, and into the very midst of a gathering of the Klan” (The Ordeal of Mansart, p. 45).  Tom decides that his best strategy is to help Mrs. Breckenridge to escape. She faints in the buggy as they approach the city, and the mob drags Tom from the buggy and lynches him in front of the church.

At the same time that the murder takes place, Aunt Betsy (who is an esteemed midwife) and Tom’s wife Mirandy are in a house nearby where she is in labor with their first child. Aunt Betsy carries the newborn baby to the bloody steps of Emmanuel AME, anoints him with his father’s blood, and declares his name Manuel.

The Black Flame’s epic narrative is centered on the life of Manuel, who eventually becomes president of a black college in Georgia. It is set against the backdrop of 20th century world history featuring an ambitious storyline of a black life that begins just after Reconstruction and ends in the middle of the century as the modern civil rights movement in America begins. The character of Manuel Mansart is not entirely autobiographical (in fact, a thinly disguised Du Bois-like character, the Yale-trained historian “James Burghardt,” appears later in the novel), but Manuel is an avatar for the ambitious black educational agenda that Du Bois fought for over the course of his career. By the end of the first volume of the trilogy Manuel recognizes and accepts his destiny as a race-man and an intellectual leader stating that:

I am that Black Flame in which my grandmother believed and on whose blood-stained body she swore. I am the Black Flame, but I burn for cleaning, not destroying. Therefore, I burn slow.

The Black Flame is far from a perfect novel. Even in the few details I’ve shared thus far one can see Du Bois’s tendency toward the melodramatic. The dense historical details often bog down the narrative, and it is reasonable to suspect that some of the long blocks of historical exposition were the result of Du Bois leaning on his historical writing more than his literary imagination. A recent article on The Black Flame also evaluates some of its problematic portrayals of women, even despite the presence of educated female characters such as Jean Du Bignon, who is based on Du Bois’s second wife Shirley Graham Du Bois.

I’ve often thought about Du Bois in these days of uncertainty about what this unstable and hostile presidential administration will bring. This election reminds us of other periods of backlash after black progress. There was so much violence after Reconstruction that the historian Rayford Logan dubbed this period “the nadir of American race relations.” The Civil Rights Movement of the 1950s and 1960s was riddled with assassinations along the way, and in the wake of the 1965 Voting Rights Act, the Republican “southern strategy” was born.

It is likely that future historians will see the 2016 election as yet another example of the historical “whitelash” against black progress, in which the first black President–a measured, intelligent law professor committed to the project of multiracial democracy–was succeeded by a belligerent, vulgar white supremacist businessman with no political experience, who has energized a racist underground. As scholars of black intellectual history, we understand that these recent political developments sit squarely within a 400-year history of violence and enslavement. Du Bois’s novel creatively documents that history in an epic story about education and resistance.

Comments on “W.E.B. Du Bois, The Black Flame, and the Struggle Ahead”