This month I interviewed Bill V. Mullen, Professor of American Studies at Purdue University, about his recent book, Un-American: W. E. B. Du Bois and the Century of World Revolution (Temple, 2015). His previous books include Afro-Orientalism (Minnesota, 2004), Popular Fronts: Chicago and African American Cultural Politics 1935-1946 (Illinois, 1999), (with Cathryn Watson) W. E. B. Du Bois on Asia: Crossing the World Color Line (Mississippi, 2005), and W. E. B. Du Bois: Revolutionary Across the Color Line (Pluto, 2016). Mullen recently published a short biography of Du Bois with Pluto Press for its Revolutionary Lives series. He’s currently working with Diane Fujino on an edited volume of the writings of the late jazz bandleader and political activist Fred Ho. He also has a longer term research project researching police violence, including sexual violence committed by police.  That project seeks to connect the Black Lives Matter movement to other histories of policing in the U.S., including against Native American and Latino/a communities. 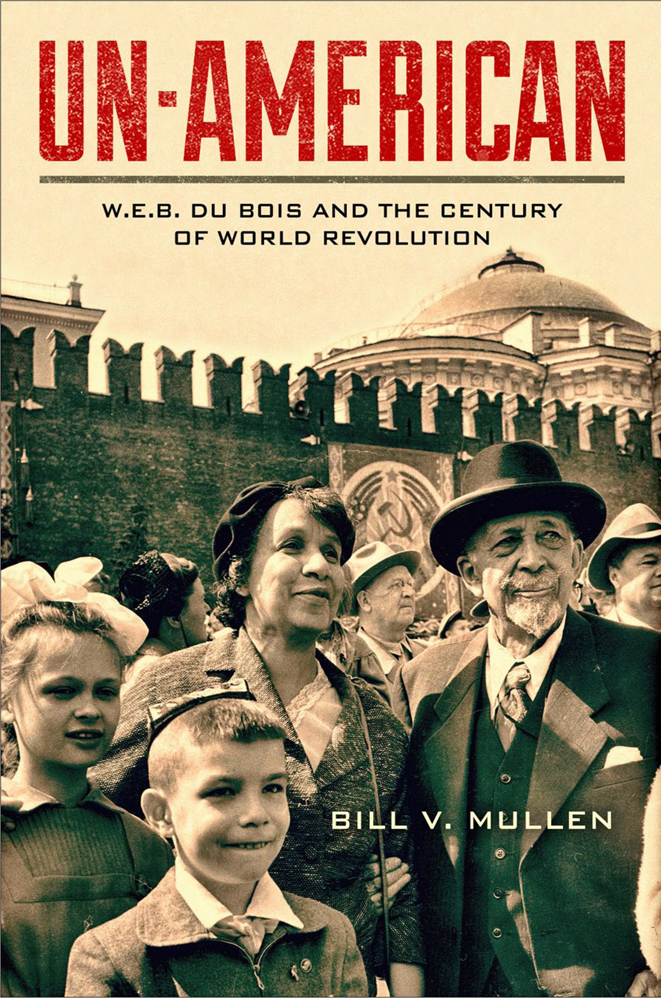 Phillip Luke Sinitiere (PLS): The title of your book announces the historic late-career anticommunist critique and marginalization of W. E. B. Du Bois, part of which you reference as the “commemorative containment” of his twilight years. Please address this, along with your book’s broader argument about Du Bois and revolutionary thought.

Bill Mullen (BM): “Commemorative containment” refers to the formal and informal silencing in scholarship on Du Bois studies around topics, and ideas, central to his embrace of Marxism.  For example, I dedicate a chapter to Du Bois’s writing on India.  Jawaharlal Nehru and Du Bois both began a long embrace of Socialist politics inspired by the Russian Revolution, and especially the Communist International’s formal support for “national self-determination” of the colonies. Du Bois and Nehru visited the Soviet Union within a year of each other in the late 1920s, and came away convinced that Communist internationalism was important to anti-colonial struggle. Du Bois’s support for Indian decolonization should be understood in that context.  I also dedicate a full chapter to Du Bois’s writings on China. Du Bois’s interest in Mao, Maoism, China, and the Cultural Revolution was not, as often characterized, a late-in-life conversion. It was a considered re-evaluation of his earlier criticisms of China in the 1930s. Very few scholars, with the recent exceptions of Taj Frazier and Vaughn Rasberry, have paid much attention at all to how Du Bois’s support for Asian national liberation struggle early in the 20th century was critical to his embrace of Marxism later on.

The absence of attention to Du Bois’s writings on Asia relates to my argument that one must read Du Bois’s life “backwards.” Du Bois began expressing interest in Marxism and Socialism in the first decade of the 20th century, at the same time he was “awakened” to national liberation struggles in Asia and Africa. Du Bois ended his life moving to Ghana to support the newly independent African state, and simultaneously declared his membership in the Communist Party. These  moments, sixty years apart, must be seen as continuous. Only by seeing the “early” Du Bois’s political interests clearly can we see his “late” commitments clearly, and vice versa.

Secondly, scholars have downplayed or ignored almost entirely Du Bois’s interest in the Bolshevik program for “World Revolution” formalized in 1919 after the Russian Revolution.  The Communist International argued that Socialism could only succeed globally if the proletariat of the first world and the colonies could simultaneously support national liberation struggle as a step towards proletarian internationalism. Du Bois embraced this idea wholeheartedly. It is why he was drawn to travel to China, to write about India, to argue that Africa and Asia must unite, and that the working-classes of Europe and America should oppose capitalism and colonialism. In his novel Dark Princess, written immediately after he returned from the Soviet Union, his protagonist, Kautilya, has just returned from Moscow, where she has been trained in world revolutionary theory. There are references in the novel to the “Black Belt,” the Bolshevik description of  African-American southerners as an oppressed national minority. These ideas did not come out of a vacuum: they came from Du Bois’s appreciation for the Bolshevik program. As he once put it, the Russian Revolution “explained me.”

PLS: Your previous book on Du Bois covered his work in relation to India. How does Un-American expound upon this part of Du Bois’s career, and Asia more broadly?

BM: It expands by digging deeper into Du Bois’s writings and placing them alongside contemporaries with similar views of Asia. In addition to Nehru, I compare Du Bois’s support for China’s communist revolution to the work of Agnes Smedley, with whom Du Bois shared a stage in the 1940s in support of China’s Communist revolution. I also note that Du Bois had a close relationship after World War II to Anna Louise Strong. Like Smedley, she lived in China, wrote favorably of Maoism, and was effectively blacklisted in the U.S. for her support for Communism. I begin the book with a picture of Du Bois, Strong and Mao at his Wuhan villa in 1959, on one of Du Bois’s last visits to China.  Like Du Bois, Strong was won to radical politics around the time of World War I and the Russian Revolution. In combination, Strong, Smedley and Du Bois show that Du Bois was part of a generation of radicals in the U.S. deeply committed to the world revolution idea.

BM: “Russia and America” is the only book-length manuscript Du Bois wrote that has never been published. His publisher, Henry Giroux, found it too pro-Soviet. It has effectively been blacklisted from the Du Bois canon. I argue that the manuscript must be read carefully to understand several key aspects of Du Bois’s thought. First is Du Bois’s support for the Bolshevik revolution. The manuscript demonstrates that Du Bois perceived the Russian Revolution, and the American Revolution, as social movements “from below” both of which could be models for human liberation.  This analysis was Du Bois’s response to the Cold War paralysis that had set the countries, but more importantly, its people, at odds, and subject to joint annihilation through atomic war.

Secondly, I point out that “Russia and America” was intended by Du Bois as a sequel to Black Reconstruction. Du Bois is trying in the manuscript to develop a new theory, or model, of self-emancipation, updated to the 20th century. Remember that he refers to slave rebellions in Black Reconstruction as an “experiment of Marxism.” He effectively reads slave rebellions through the lens of Bolshevism and his self-education in Marxism. “Russia and America” in turn reads the history of the Soviet Union and the U.S. according to an interpretation of history generated by Black self-emancipation. As Du Bois put it, he could read 20th century events  by understanding the experience of 19th Black Americans.

In the “Russia” manuscript Du Bois also struggles with the legacy of Stalinism: he recognizes that the violence done by Stalin to reform the kulak system, for example, was a dreadful but in his view necessary aspect of the Revolution.  Du Bois came to perceive the violence of the Russian Revolution as tantamount to the commitments John Brown made to take the lives of slave masters during his attack on Harpers Ferry, or the willingness of slaves to die for their freedom.  One needs to to read “Russia and America” in context then of Du Bois’s lifelong struggle with the costs and consequences of revolution.

PLS: Your book explores the gendered dimensions of Du Bois’s concept of world revolution. Can you tell us more about Black women’s internationalism in your study?

BM: Du Bois’s dedication to fighting the proliferation of atomic weapons during the Cold War was influenced by Shirley Graham Du Bois and a cadre of Black female activists on the Left who were themselves dedicated to the same cause. Similarly, African American women like Claudia Jones helped move Du Bois to join the Communist Party. Jones was a primary theoretician on Black women’s oppression for the CP in the 1940s. One of Jones’s more famous essays is on international women’s day, March 8, a day chosen because Russian women took to the streets to protest rising bread prices. The day helped kick off the Russian Revolution. Jones argued that international women’s day was a day Black women, and all women, should celebrate because women’s oppression could not be eradicated until capitalism was eradicated. Jones aligns politically with Du Bois in the 1940s and 1950s: supporting Mao’s China, Stalin’s Russia, and the concept of world revolution.

Following scholars like Cheryl Higashida and Erik McDuffie, I argue that Du Bois’s own steadfast political commitments in this period are part and parcel of a wider radicalization of women, especially Black women, close to him in the 1940s and 1950s especially. On a personal level, Graham Du Bois and a circle of Black women friends were critical to sustaining Du Bois’s emotional health during his period of formal blacklisting in the 1950s after he and Shirley lost their passports and could not travel.

Phillip Luke Sinitiere is a scholar of American religious history and African American Studies. At present, he is at work on a biography of James Baldwin for Rowman and Littlefield’s Library of African American Biography series. Visit his website here.