***This is the fourth installment of my series on Afro-Asia, examining the cultural and political exchanges and historical connections between people of African and of Asian descent. See my introduction to the series entitled “The Deep Roots of Afro-Asia”; my interview with Yuichiro Onishi in part two; and a guest post by Crystal Anderson in part three.

This month, I interviewed Robeson Taj Frazier about his recent book, The East Is Black: Cold War China in the Black Radical Imagination (Duke University Press, 2014). Dr. Frazier is an Assistant Professor at the University of Southern California’s Annenberg School for Communication and Journalism. His research explores black political culture and popular culture, globalization and cross-cultural traffic, and African diasporic intellectual history, with a specific focus on the intersections between African American culture and other cultures, especially 20th and 21st century China. His work has been published in edited books including The New Black History: Revisiting the Second Reconstruction (Palgrave Macmillan, 2011), African Americans in Global Affairs (University Press of New England/Northeastern University Press, 2010), and Migrating the Black Body: Visual Culture and the African Diaspora (University of Washington Press, forthcoming); as well as in academic journals and periodicals such as American Quarterly, China Information, The Journal of African American History, and Souls: A Critical Journal of Black Politics, Culture and Society. 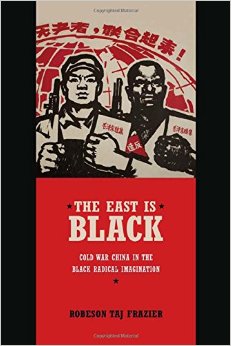 Keisha N. Blain: Tell us more about the inspiration for your book title, The East Is Black. Where does the title come from and how does it reflect the major argument and themes of the book?

Robeson Taj Frazier: The book title is a play on “The East Is Red,” an extravagant Chinese opera and song that for the latter half of the 1960s was the unofficial national anthem of the People’s Republic of China.  But the title signifies a number of things to me – some that tie directly into the arguments put forth in the book, and others that are reflective of my intentions/objectives with the book. So in one vein the title refers to: China’s outreach to different groups of African descent during the Cold War; black radical travelers’ different efforts to communicate the significance of China’s road to socialism to black American and Afro-diasporic audiences; how blackness and race became a useful nodes to reframe Asian communism for black Americans and to domesticate Chinese citizens with the power of the Chinese state and the ideas of China as leader of global anticapitalist and antiracist movement.  In the other vein, the title speaks to my own investment in increasing black Americans’ awareness of China, and Chinese people’s understandings of black American life.  Lastly, there’s a mild Hip Hop connotation.  I grew up in an era when some of my favorite American Hip Hop artists were constantly referring to “the East” and utilizing aesthetics and imagery that signified Asian influence and culture – Wu Tang Clan, Blahzay Blahzay, Jeru the Damaja, X Clan, Afu Ra. The irony is that when several of them were referring to “The East” they were also bigging up their neighborhood of East New York.

Blain: What are the factors and/or motivations that led you to write a book on the “relationship between Asian struggles against imperialism and black American movements against social, racial, and economic injustice”?

Frazier: I was interested in expanding my own understanding of black intellectual history and political culture, and the role travel and media played in different black intellectuals’ efforts to confront capitalism and racism while facing increased repression from the U.S. state. Similarly, I have studied Mandarin, spent time traveling and living in China, and have had a longstanding interest in Chinese history and political culture.  So the book is my effort to merge these two concerns and explore the intersections and differences that exist between black diasporic and Chinese political history and culture. And I argue that these relations are not just historic but also existent between contemporary movements that are being shaped in both contexts – in China the massive strikes and civil disobedience by migrant workers and ethnic minorities, as well as the young people in Hong Kong who have been mobilizing in mass against increasing government electoral manipulation and influence from the mainland; and in the U.S. the #BlackLivesMatter, Occupy, and anti-mass incarceration movements that have been galvanizing publics and reshaping American consciousness.

Blain: Your book highlights the significant function of what you refer to as radical imagining. Tell us more about how you conceptualize this term; and how you use it in the book.

Frazier: Many people have theorized the imagination as a political practice—that is to say the role the imagination plays in the both the creation of individual and collective identities and moreover in the construction of collective formations like the community, the society, the nation, and the nation-state. My use of radical imagining builds on this thread, in particular off the ideas and arguments made by Robin D.G. Kelley, Cynthia Young, Gerald Horne, Shelley Streeby, among others. Dr. Kelley writes, “The map to a new world is in the imagination….[It] transport[s] us to another place, compel[s] us to relive horrors and, more importantly, enable[s] us to imagine a new society.” It is the metaphors of possibility, travel and contradiction within his statement that best tie into what I mean by radical imagining – the fertile inventiveness and creativity, as well as limitations, errors, and ambivalences that encompassed and animated black intellectuals’ political projects of solidarity, societal transformation, and radical democracy.

Blain: Your book utilizes a diverse set of primary sources—including songs, films, and travel narratives—to support your arguments. Tell us more about the process of conducting research. What did you find most surprising and/or exciting about conducting research for this book?

Frazier: The best part about conducting research on this book were the relationships that I gained, particularly with Vicki Garvin’s stepchildren, Lincoln and Miranda Bergman. We were connected via the Freedom Archives, a phenomenal institutional resource and activist-based community of scholars, archivists, and social justice workers. The Bergmans really took me in and just are lovely people. One of my favorite moments was when they sent me several videos documenting Vicki Garvin’s travel to China in the 1980s with a delegation of black alumni and students from City College of New York. So much of my research has required me to translate information from diaries, letters, print media, radio, and government documents into a cohesive narrative and argument – what I often describe as turning multiple images and clips into a unified movie or documentary of sorts whose reel is inside my head, my writing simultaneously attempting to flesh the images out on the page. To see Garvin and others moving through China, beyond the photograph, beyond her travel notes; to listen to her and others ask their travel guide questions; to watch and absorb their reactions to various parts of their visit; to observe their communion and fellowship throughout their stay – this was just breathtaking and offered me a different relationship to one of the activist intellectuals I have built a relationship with over the past decade.

Blain: Tell us more about the role of gender in the book. How were the experiences, concerns, and priorities of black men different from the women in your study?

Frazier: It was important to me to center gender within the book – to think through how political activism, travel and media-making are sites where gender roles and gender identities are both performed, interrogated and challenged. Several of the black male radicals went to China looking for different indications of progress and societal transformation than their black female counterparts. Their experiences as men and women positioned them differently in the world, and consequently this had an impact on the particular ways they perceived and translated China’s importance to black diasporic audiences, as well as on the social agents and practices that they identified as examples for foreign audiences to consider and value within their own political projects. One of the objectives of the book was to try and offer a realistic and comprehensible account of this.

Blain: What projects are you currently working on?

Frazier: I am currently focusing my energy and time on two projects. The first is my second book project, From Mao to Yao: Culture, Media and Black Life in China. This book builds on The East Is Black by exploring contemporary relations and experiences of different groups of African descent in China, in particular professional basketball players, African immigrants, and the growing base of blacks working in different facets of Chinese popular culture, media and creative industries. My second project is a film I coproduced titled The World Is Yours, that examines how Hip Hop artists and fans of the past two decades have leveraged the Internet to transform the music and tech businesses, become successful, and empower communities. We will be taking the film out on the road to festivals beginning in the late summer/early fall of 2015.

Comments on “On Cold War China in the Black Radical Imagination: An Interview with Robeson Taj Frazier”