loading...
By Patrick Rael October 19, 2016 Comments Off on Why are Trump Supporters Trying to Spark another Civil War?

As outrageous new events on the campaign trail assault us every day, it is becoming easy to accept the absurdities of this election as some kind of new normal. We keep scratching our heads, but the sheer repetition of individual moments of craziness–each of which alone would be the central story in any other election season–is numbing us to the novelty of what is happening. We need to put it all in some kind of perspective.

Donald Trump specializes in race-baiting and nativism, sexual predation and vulgarity. But the most fundamental danger he represents is to basic democratic processes — particularly the peaceful transition of power from one governing party to another.

Calls to monitor the polling places of “other communities” to prevent election fraud have become integral components of his message. Surrogates are amplifying them, and they are having an effect on the voting public. A Trump supporter at a Mike Pence rally recently stated that she and her compatriots were ready for a “revolution.” An outspoken Milwaukee sheriff tweeted that Trump supporters should turn out to the election with “pitchforks and torches.”

It's incredible that our institutions of gov, WH, Congress, DOJ, and big media are corrupt & all we do is bitch. Pitchforks and torches time pic.twitter.com/8G5G0daGVN

Effectively, these folks are saying that the system is hopelessly corrupt, and the only way to save it is to break it.

The Civil War was that exception. The country’s constitution, which state delegates hammered out in Philadelphia in 1787, is often upheld as majestic, but the loose concoction of compromises it contained set the nation on a long path to war. Just as only clear and solid rules make boardgames playable, so too nations depend on constitutions that are clear and comprehensive. On one important point, ours was neither. 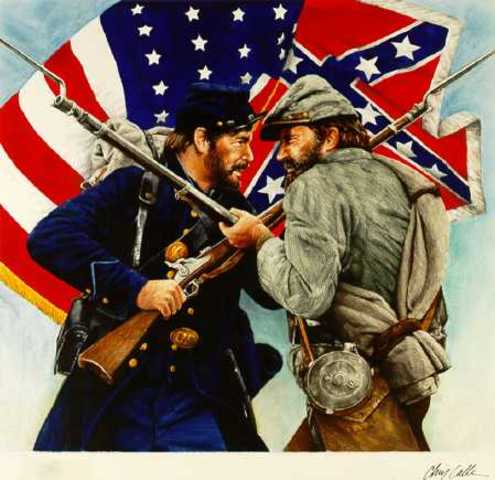 That question was: can people be property? The American Revolution set the Atlantic world to fiercely debating this question. For long millennia, before liberal concepts of property ever evolved, most societies had practiced forms of extreme social obligation that came to be called “slavery”: warriors became captives, debtors became pawns. The sudden expansion of Europe into the Atlantic world adopted these older forms of servitude to the needs of nascent capitalist enterprises in the colonies.

As legal and constitutional systems came increasingly to protect rights to the wealth thus accumulated, property became all. Social orders once conceived as hierarchical orderings of graduated social stations were replaced by a new conception, envisioning legal (not social) equality for all. But in this emerging capitalist order–increasingly committed to a world divided into things and people who could own them–was it possible for people to be the things that others could own?

Contrary to popular perception, slavery wasn’t something “everyone” practiced at the time of the nation’s birth; the founders debated the issue hotly. The southern states required that humans be property, while the northern ones began a gradual process of rejecting that possibility. The Revolutionary-era struggle against slavery clearly owed much to the rise of a new industrial economy predicated on free labor, and new forms of evangelical Christianity lent the opposition to slavery the flavor of a moral crusade.

As a result, the Constitution’s stand on slavery was a masterpiece of ambivalence. It acknowledged and protected the institution — most perniciously with a clause that let slaveholders count 60 percent of their human chattels toward their free populations for purposes of representation in government. The price of union between states with many slaves and states with few was this:  a government that upheld slavery without ever mentioning it by name (James Madison had hoped that this would permit future generations to more easily outlaw it). In 1787, the compromise worked to forge a new nation. By 1860, that nation had come apart.

For decades, those who led the major national parties had sought to submerge the unresolved slavery issue, if only to protect themselves from being riven by sectional factions. Among a national electorate, no party could champion the interests of just one section and thrive.

And yet despite these powerful institutional disincentives, the antislavery message worked its way into political discourse. The tireless efforts of abolitionists anchored the movement, even though the most radical of these forsook formal political activity because they viewed the Constitution as “a covenant with death” and “an agreement with Hell.” Others, though, founded antislavery third parties, which fostered a generation of new political leaders, and tested a range of antislavery messages — many of them, the radicals complained, hopelessly compromised (and even racist) versions of pure antislavery.

Gradually, demographics and economics turned away from the South. In a representative democracy, the “free” states would eventually come to dominate national tribunals, where representation was partly determined on the basis of population. Southern politicians demanded an activist government to defend their interests (e.g., the Fugitive Slave Law), but this converted otherwise indifferent northerners by fostering the image of a “slave power” determined to undermine political liberty in the same ways that slaveholders denied slaves their personal liberty. The same southern politicians sought to expand the institution westward, but this raised concerns about artificially inflating representation of the tyrannical slave power in Congress.

The impasse came when in November 1860 the country elected to the Presidency Abraham Lincoln, the leader of an avowedly antislavery political party with a clear sectional base in the free states. Southern politicians, who had long been stewing over the benefits to their states of the national compact, chose to secede. Convinced that politics drifted against them, southern hotheads launched a pre-emptive conservative counter-revolution against the “progress” represented by a new industrial economy and a new wave of religious and moral reform.

Lincoln chose to uphold the union rather than let it sunder, and war came. Politics had broken. Eleven of fifteen slaveholding states defected from the Constitution to become another confederated state, while the North could use no mechanism in the Constitution itself to prevent this from happening. Only force of arms could resolve the issue. Both sides had thrown out the rulebook, reverting to something closer to the state of nature from which civil society should be a refuge.

The ensuing war caused 750,000 deaths, millions of casualties, billions in capital losses, and a generation broken by war. Ultimately, Union economics, manpower, and arms decided the issue, and the Confederacy surrendered completely. But even then the war was not over, for the white South’s political leaders sought to retain in peace what they had lost in war:  ownership of land, and control over black labor. Nothing less than an armed insurgency ensued, aimed squarely at the electoral process.

Ultimately, it successfully compelled the state to abandon the effort to make freedom meaningful. For the next century, the descendants of slaves lived lives of second-class citizenship. They still do. A national disgrace that continues to claim lives has laid waste to our moral prestige at home and abroad.

That’s what it took to break the political system in this country. We broke the government to get rid of slavery. The stakes of the Civil War were nothing short of ending human bondage, which we accomplished only incompletely, and at great expense in blood and treasure. We can be proud of the accomplishment, but it was costly.

Since then, we have not seen fit to repeat the experiment. We have strayed close in times of great turmoil. But we have never again crossed that line.

The presidential nominee of the party that led the nation to victory against slavery is now talking about doing it again — about repeating the process by which we declare illegitimate the basic rules by which we govern ourselves.  And his followers are heeding him.

I want to know why.  If in the past only something as monumental as destroying slavery justified breaking the system and courting all the horrors of temporary anarchy, what now is at stake?  We deserve to know.

Patrick Rael is Professor of History at Bowdoin College. He is the author of numerous essays and books, including Black Identity and Black Protest in the Antebellum North (North Carolina, 2002), and his most recent book, Eighty-Eight Years: The Long Death of Slavery in the United States, 1777-1865 (University of Georgia Press, 2015).