loading...
By Adriana Chira June 27, 2019 Comments Off on Liberalism, Emancipation, and the Atlantic World

George Hackett’s trajectory simmered with the tensions that defined the Age of Emancipations. Hackett was born at the turn of the nineteenth century at a political crossroads—in Baltimore, an Atlantic port city connecting the US North, where gradual emancipation was underway, with an expanding plantation-based southern economy. Coming into the world in 1806, he would have grown up hearing radical liberal promises of inclusion. But as a mature man, he would have also learnt how such promises could fail. Hackett would have witnessed one arc of the nineteenth century; while the century began with Haitian independence, it closed with brutal policies of exclusion across most post-emancipation societies. With a new export boom taking place in the Global South after the 1850s, elites doubled down their efforts to access cheap labor by instituting new regimes of coercion, supposedly in the name of progress. If promises of equality to Afro-descendants had marked the late eighteenth century, one hundred years later, across American societies, governments approached equality as a horizon that would become accessible only once the socially marginalized were “prepared.” But Hackett did not just watch this arc happen before his eyes. Indeed, his story disturbs this seemingly straightforward teleology, because it reveals the world of struggle that Afro-descendants put up to create fissures within an incredibly resilient political-economic system of exploitation. As a sailor and steward, Hackett travelled from Mexico, to Cuba, Brazil, and Chile. Throughout, he learnt about the legal openings that Afro-descendants across the Western Hemisphere had created for themselves, an experience that likely shaped his understanding of rights in the US. At a time when the US Supreme Court denied African Americans citizenship, Hackett and other African Americans in Baltimore used the courts to advocate for a more expansive definition of citizenship. He fueled his political activism by drawing on his diasporic experiences and held hopes that national citizenship could be a site for self-realization.

George Hackett’s times, as presented to us by Martha S. Jones, were permeated by a question that is imbedded within the Age of Emancipations: how to create liberal democratic societies out of Atlantic worlds of slavery. Hackett sought to find a place for himself in a world that simultaneously promoted advancements and restrictions. Jones’s chapter belongs to the edited volume, Race and Nation in the Age of Emancipations, which explores precisely this tension. With chapters covering a broad geographic expanse (including the North and South Atlantic), the volume shows how Afro-descendants across the Western Hemisphere engaged with new liberal ideologies of inclusion while countering elite efforts to restrict the political openings created by these ideologies. The editors, Whitney Nell Stewart and John Garrison Marks, lay out the agenda for the volume in the introduction.

There is a relatively vast Atlanticist historiography on the nineteenth century that has focused on the roots of capitalism within plantation slavery, an angle that emphasizes capitalism’s racialized nature. The editors aim to provide a counterpart to this approach by exploring the nineteenth century from the vantage point of political and socio-legal history–a time when Afro-descendants were not just objects to ever new regimes of economic coercion, but also subjects who shaped debates about the nature of national citizenship and put forth their own models of political inclusion. 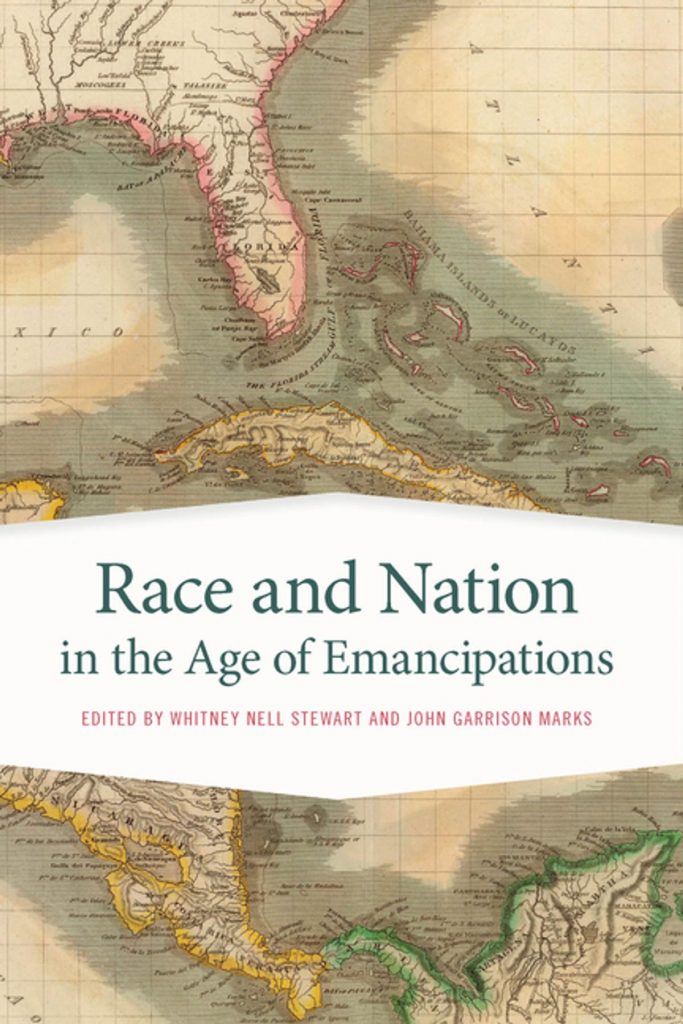 Traditionally, historians working on the Age of Emancipations have not made as extensive a use of Atlanticist methods as those focusing on the Age of Revolution. At first sight, emancipation is an issue tied to national citizenship or empire-specific restructurings. However, even when they focus on one locale, the volume’s contributors show that emancipation was an Atlantic phenomenon. Individuals and communities took note of events occurring at other sites, drawing inspiration from them for their own endeavors. It is such circulations and observations that would yield lasting diasporic imaginings.

The volume is organized around four core themes–mobility, law, labor, and the public sphere; many of the chapters, however, cut across several of these categories. The topic of mobility has been central to Atlanticist histories of slavery and emancipation. The three contributions in this category address primarily the openings that mobility afforded some Afro-descended people. Matthew Spooner explores how wartime chaos created opportunities for enslaved people who lived below the Mason and Dixon line; they could flee in pursuit of more autonomy. Such movement blurred the boundaries between slavery and freedom in the era of the War of Independence. But according to Spooner, the outcome was not necessarily the demise of the institution of slavery, nor its re-entrenchment. Rather it was tense co-existence between freedom ideologies, which persisted in the cracks created by the revolutionary turmoil, and slaveholders’ violent reactions. Andrew Wegmann argues that African American migration to Liberia was not the outcome of coercive policies instantiated by state governments and the American Colonization Society alone. Migrants were often relatively well-to-do and saw “their lives in Africa as extensions of their lives in the United States.” With one exception: “this time they could be the leaders” (43). Ikuko Asaka focuses on African Americans fleeing slavery in the US and seeking refuge in Canada, where they used the press to claim the same rights as European exiles and refugees from the 1848 movements. Through this comparison, not only did they describe the institution of slavery as oppressive and unjust, but they also likened themselves to European political radicals.

The second cluster of essays focuses on the law. Philip Kaisary explores liberal definitions of citizenship in a Black republic–Haiti–through a careful reading of the 1805 constitution. Kaisary captures some of the tensions at the heart of this liberal project. On the one hand, it promised transracial egalitarianism under the banner of Blackness (by declaring all Haitians to be generically known as Black). But at the same time, nineteenth-century political leadership sought to square this egalitarian project with coercive labor regimes. Martha Jones’s piece on George Hackett pushes us to think about the law broadly, by showing how a consciousness of rights can emerge in places such as a ship, on docks, or along the hallways of a courtroom. According to Jones, a growing awareness of the importance of the law in securing rights was just as important as other forms of Black activism.

The essays in the third cluster ask how the terms of political inclusion were negotiated through labor mobilization. Gad Heuman shows that freed people in the British Caribbean rejected the terms of apprenticeship. After 1838, when apprenticeship folded and Black and Brown populations were enfranchised, they built on their earlier mobilization to make political participation meaningful. They proudly proclaimed their Blackness as a key aspect of their political platforms. “Vote for Vickars, the Black Man!” said the slogan of the first Black House of Assembly Representative in Jamaica (118). Caree Banton explores the trajectory of migrants from Barbados to Liberia at a time when African American interest in the colonization project had waned (post 1865). As artisans and British subjects from the West Indies, they were granted a higher status than the one assigned to the Krus, the Mandinka, or to the African recaptives who were settled there. Banton’s piece captures the complicated and highly hierarchical space that Barbadian migrants inhabited in this colonization project.

The fourth cluster explores how Afro-descendants shaped the new media and public culture associated with liberal republicanism. According to Paul Polgar, in cities such as Philadelphia or New York, African Americans forged a politics of antislavery through an emphasis on moral uplift and republicanism. With attention to Mexico and Colombia, James Sanders argues that in Latin America, the prevailing ideology of “republican modernity,” one that emerged during the Wars of Independence against Spain at the beginning of the nineteenth century, included promises of social inclusion that the elites could not renege on easily. Popular sectors applied pressures to keep this promise alive. Celso Castilho shows that in Brazil, Afro-descendants staked out claims on citizenship by participating in abolitionist associational life. His piece captures how the terms of Brazilian citizenship emerged out of abolitionist mobilization.

Most of the chapters focus on port cities that belonged to an Atlantic economy. More attention to rural worlds would have enriched the volume especially given that economic elites were keen on accessing and controlling labor in such regions. How did politically radical ideas circulating in urban environments reverberate (or not) beyond them? The introduction also provides a program for thinking about nineteenth-century slavery and freedom that the editors describe as a counterpart to research on racial capitalism. Indeed, the contributors capture the cracks and fissures in a political-economic system oriented around racialized exploitation of labor; they question capitalism’s inevitable trajectory. The volume therefore provides paths for further integrating these two bodies of historiography. Such an integration would help us reckon with the mixed legacy of nineteenth-century liberalism into the present: an ideology that has shaped all our major models of equality and inclusion as well as the one used to most violently exclude those marked as “not-yet-ready” for democracy.

Adriana Chira is Assistant Professor of Atlantic World History at Emory University. Her first book project, Becoming Free of Color: Popular Racial Thought in Cuba, 1791-1868, explores vernacular ideologies of race in the eastern province of Santiago, home of the first official Cuban ideal of “racial confraternity” during the War of Independence from Spain (1868-1898). She received her Ph.D. at the University of Michigan, an M.A. from Cornell University, and a B.A. from Cambridge University, UK.