loading...
By J. T. Roane November 19, 2019 Comments Off on Inland Shift: Towards a Radical Intercommunalism in the Inland Empire

*This essay is republished in partnership with Boom California as part of an ongoing series on Black California.

During a speech delivered at Boston College on November 18, 1970, Huey P. Newton extended Marxist-Leninist material dialecticism as a mode of theoretical and practical inquiry through his critical neologism “intercommunalism.” Describing two variants of intercommunalism, one reactionary and the other revolutionary, Newton premised his analytic on an understanding that American empire had eclipsed the nation-colony model of European imperial integration in a similar fashion to the ways that system eclipsed the “primitive empire” Romans built within the world as they conceived it in the Classical period of the West. “North America,” he argued, had been “transformed at the hands of the ruling circle from a nation to an empire,” changing “the whole composition of the world.” As a result, the elite of the United States “necessarily control[led] the whole world either directly or indirectly.” Intercommunalism, in its reactionary variant, created a world defined by the dislocation of finance, production, and consumption across increasingly dispersed and mediated geographic systems of resource-siphoning in which automation would give way to “cybernation [and] probably to technocracy.” The primary effect of reactionary intercommunalism, according to Newton, was the creation of a permanent class of expendable people the world over with no access to the benefits of technological transformation and who were forced to bear the worst effects of global integration.1

These key turns in Newton’s thought, his analysis of both the reactionary and revolutionary versions of intercommunalism, as well as the Black Panther’s organizational praxis responding to these novel theorizations, remain important theoretical and practical points in challenging globalization — the hegemonic financial and cultural integration of the earth that has continued since the era of Newton’s theorization. This, our age of the orange autocrat in the U.S. and of multiple neo-fascist regimes around the world, is defined by unprecedented technocratic monopoly and the devastating expansion of the permanently jobless, homeless, and nationless who can make no claim to the advances associated with globalization and who face the brunt of the negative effects of this order. Extending Newton’s concept, we currently face the rise of what I call reactionary, reactionary intercommunalism — a variant in which the façade of integration accompanying multicultural neoliberalism has given way to the explicit embrace of autocracy in and through technological, economic, and political integration. Across disparate human geographies a technocratic elite — ranging from logistics capital to social media tycoons — dictate the lives of ordinary people, deciding if they work, live, or die and under what conditions. 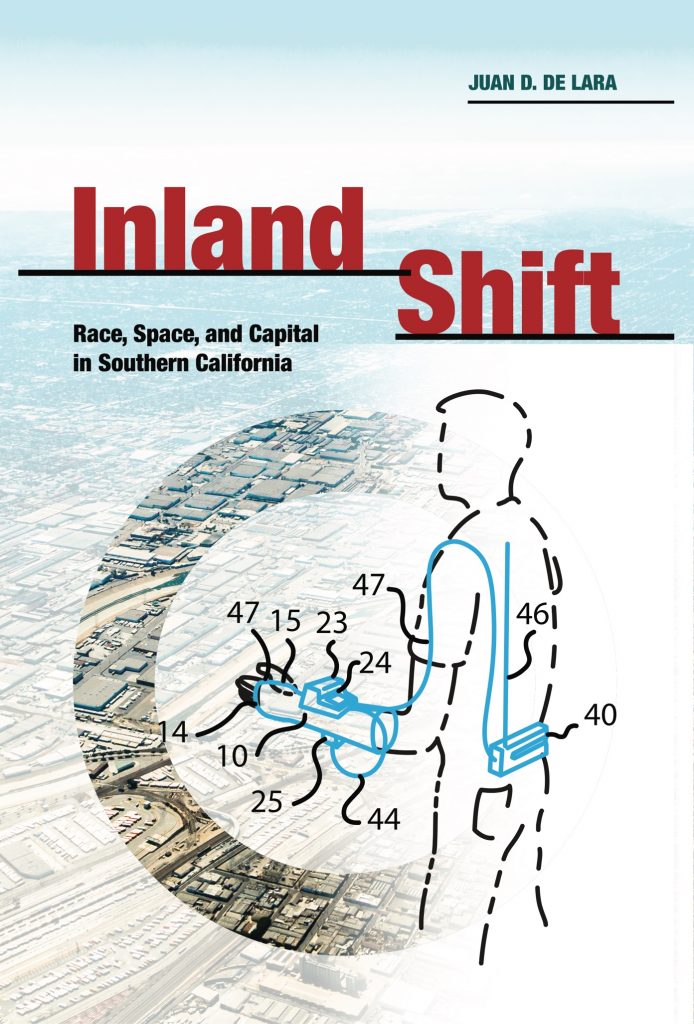 Juan D. De Lara’s important new book Inland Shift: Race, Space, and Capital in Southern California (UC Press, 2018) garners for readers analytic purchase not only on the dynamics of the technologically integrated commodity chains shaping contemporary reactionary, reactionary intercommunalism, but also on the potential for labor organizing and politics to extend the practice of Newton’s revolutionary intercommunalism. One of the powerful aspects of De Lara’s study is that, like Clyde Woods’ work in the context of the Mississippi Delta, he takes the region as his point of analysis. Foremost, as De Lara argues, the region provides a frame through which to analyze the ways that “[c]reative destruction is … woven into the fabric of capitalist development” and provides “solution to the devaluation of fixed capital by reconfiguring spatial-temporal relationships to create new investment options.” Emerging from a “speculative growth regime,” California’s Inland Empire as a distribution center for global commodities emerged as corporate boosters and politicians beginning in the 1980s justified the expenditure of collective resources to extend Southern California’s port, warehouse, and distribution infrastructures into the region encompassing cities east of Los Angeles, like Riverside, San Bernardino, and Ontario. As De Lara demonstrates, these changes were sold to ordinary people as the tide that would lift all boats, as the collective potential for prospering after the devastation of the region’s rapid deindustrialization in competition with emerging production centers around the world. Elites reasoned that the expenditures, as well as the environmental-health threats related to concentrated diesel pollution, would be worth the enhancement of the region’s position in the mounting competition for increased commodity imports. They argued that these developments would improve the lives of the region’s ordinary residents by providing them with stable incomes and concomitantly with access to the housing market as owners. In effect, however, these processes further entrenched vulnerability in communities exposed to global market fluctuations. Indeed, the cost of speculatively-growing Southern California ports and the Inland Empire distribution networks, to make them competitive with others around the nation, was the extension of tedious and poorly compensated labor under conditions of often cyborg-like surveillance, as well as environmental degradation, and racial violence.

As it chronicles the rise of a regional elite, De Lara’s work holds onto material dialecticism, introducing points of possibility for the subversion of regional logistics hegemony through the narratives of predominantly Latinx warehouse workers. In particular, he includes, along with his analysis of the dominant social-spatial features of the Inland Empire, the “counter-mappings” of workers, or the “collective stories provid[ing] insight into how people make sense of the world” which are also the “seeds of opposition to dominant systems.” Importantly, De Lara credits ordinary people with the ability to generate theoretical and cartographic insights useful in analyzing and thwarting this reviling and destructive system. In chapter five, for example, De Lara shows the ways that ordinary Latinx warehouse workers “José,” “Angelica,” and “Marta” make sense of vulnerability within the wider geography of the region. He connects their analysis with their attempts to defy the imposition of a system of technologically enhanced management in which workers are wired to track productivity (or the lack thereof) as part of the wider coordination of production, commodity importation, warehousing, and distribution for corporations like Walmart. De Lara places these everyday forms of analysis and resistance on a continuum with the efforts of organizations to combat vulnerability. For example, these mappings helped to drive the inroads made by unions to end temporary work and also undergirded efforts to halt raids, detentions, and deportations undermining local Latinx communities. The rudimentary coordinates of worker’s alternative vistas on the matters of labor, place, and politics served as the substrate out of which activist consciousness emerged. Union and community organizers drew together people by highlighting their shared narratives and common geographic analyses.

De Lara’s book provides an excellent addition to the growing work in critical human geography. It would be particularly effective if paired with important works of regional analysis and Marxist geography including Clyde Woods’ work and Ruth Wilson Gilmore’s in Golden Gulag: Prisons, Surplus, Crisis, and Opposition in Globalizing California. These works, taken together, help us to gain purchase on the development of the geographies of gendered racial capitalism in state and global capital formations and also to take stock of resistance. These works also remind us of the vital place of what Newton understood as “the left of the proletariat.” In a world increasingly defined by reactionary global integration, it is only the everyday and organized subversions on the part of ordinary people that can dislodge the tyranny of technocracy, giving expression to a world free of borders wherein the advances in technological capacity can be distributed to address crises, such as the environmental catastrophe, in order to insure our collective well-being rather than our collective destruction. As De Lara’s work effectively illustrates, we must recover the radical potential of Newton’s analysis, forwarding it into the nascent order. We must also organize shoulder to shoulder with the potentially revolutionary intercommunalists across the world if we are to survive the terrifying juncture of environmental destruction, technocratic monopoly, and global integration. The people of the Inland Empire have led the way in demonstrating that the place of ordinary people can incapacitate technocratic power and fighting fascism, the political analog of an economy based in technocratic monopoly.

May the revolutionary intercommunalists of the world unite!