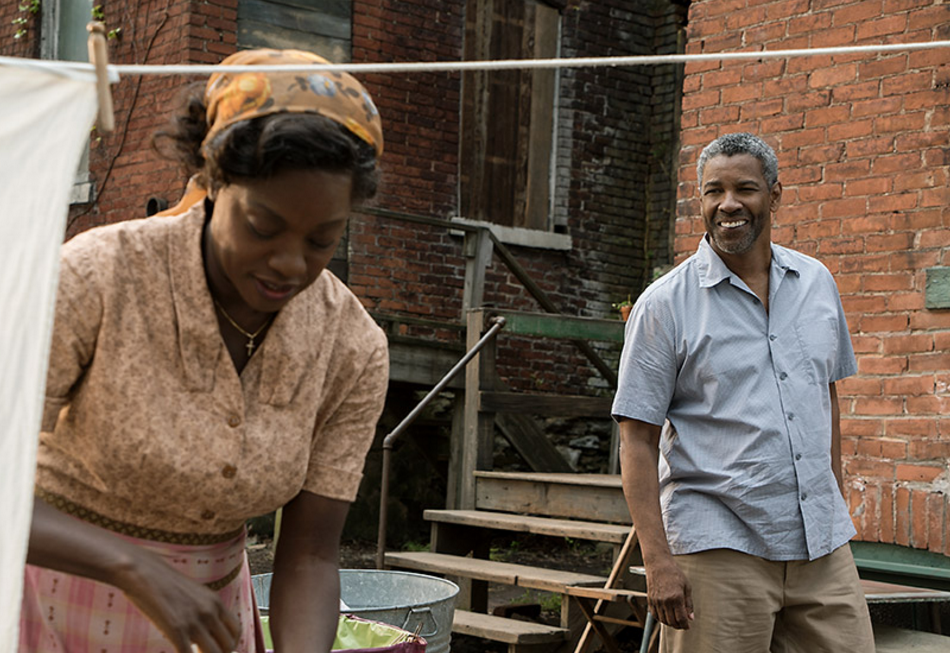 Just after Christmas, I went to see “Fences,” Denzel Washington’s film adaptation of August Wilson’s Pulitzer-Prize-winning play. I went with a fair degree of trepidation. Movies, after all, run on action, while plays feast on dialogue. And Wilson’s plays run especially on dialogue, making them difficult to translate into compelling cinema.

I am happy to say that I was wrong. “Fences” succeeds on so many levels that it is hard to know where to begin. The dialogue is delivered with the poetic cadence of black vernacular for which Wilson is famous, and yet the movie has movement and the sort of dynamism and realism that makes good cinema such a popular art form.

The cast was strong. Denzel Washington as Troy and Viola Davis as his wife Rose are virtually assured awards, but the others—Jovan Adepo (Cory), Stephen McKinley Henderson (Bono), Russell Hornsby (Lyons), Mykelti Williamson (Gabriel) and young Saniyya Sidney (Raynell)—also deserve recognition. Much credit belongs to August, who created the original screenplay, and Tony Kushner, who clearly added immeasurably to it. Kudos also go to the directorial skills of Denzel Washington and to the photography and the editing. The sets were realistic and remarkably faithful to Black Pittsburgh neighborhoods, streetscapes, and atmosphere.

Set in 1957, the protagonist of “Fences” is Troy Maxson, frustrated and bitter because he came along too late to play baseball in the major leagues even though he had been a leading home run hitter in the Negro Leagues. Troy is also bitter because after eighteen years working as a garbage man, his earnings have been so meager that, despite living thriftily, he managed to get a small house for his family only by unethically cashing in his brother’s disability check, for which he feels guilty. Troy prevents his son, Cory, from accepting a college football scholarship because he thinks whites will deny the boy a real chance to succeed—just as they did to him. 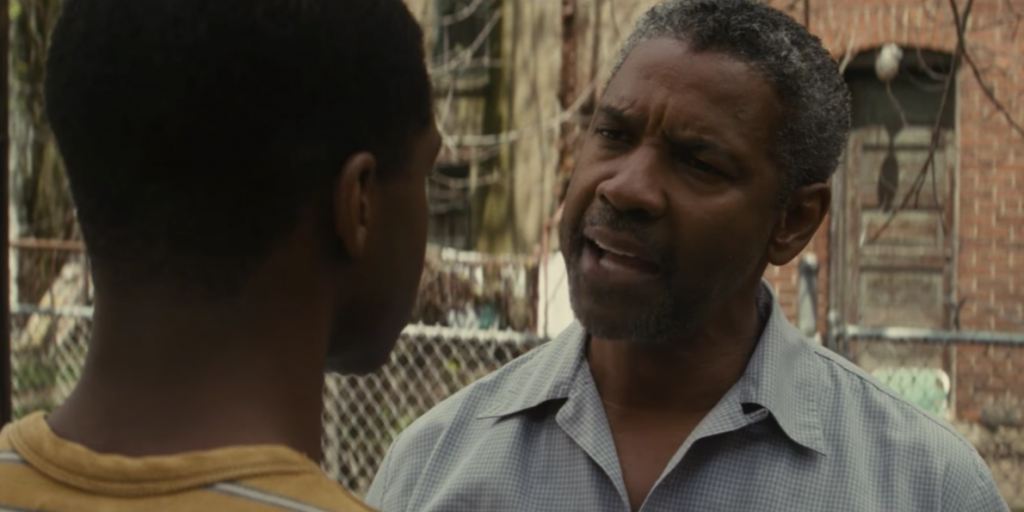 There is also the hint, brought on angrily by Cory, that Troy fears his son might outdo him, and succeed where he has failed. In one of the most famous monologues in all of Wilson’s plays, Troy responds to Cory’s plaintive question, “How come you ain’t never liked me?” with a diatribe that begins, “Who the hell say I got to like you?” and proceeds with a litany of things—food, clothing, shelter—he has provided the boy. “I go out of here every morning,” Troy exclaims, “bust my butt…putting up with them crackers every day” because it’s my job. It’s my responsibility!” This is the most famous, but not the only bit of pontificating that Troy dishes out to his son, his wife, and his best friend Bono, in which he preaches how life should be lived for honor and respect and living up to one’s obligations.

Yet, Troy himself has not been acting responsibly. He has secretly been running around with Alberta, whom he has gotten pregnant. With her pregnancy, there is no longer keeping the news from Rose. But rather than accepting full blame, he tells Rose he did it because, with all the frustrations he has faced, he needed a woman who “firmed up my backbone” and made him feel successful. Rose explodes. In one of the most gripping female monologues in all of Wilson’s plays, Rose replies:

“I got a life too. I gave eighteen years of my life to stand in the same spot with you. Don’t you think I ever wanted other things?”

Rose magnanimously agrees to raise Troy’s child, whereas Troy expels Cory from the house because the son has lost respect for Troy and refuses to give him the unquestioning deference he demands. Cory joins the Marines, and never comes home until, six years later, he returns for Troy’s funeral. After telling Rose he won’t attend the funeral, Cory relents when she tells him how much Troy loved and admired him, and how much Cory is just like his father.

There is a lot of August Wilson in the play. First, there is the title, “Fences.” Throughout the play, Troy and his son are building a fence, whether to keep people in or out is never clarified. The home in which August Wilson was raised, on Bedford Avenue in the Hill District, sat well back from the street and was closed off by a gate, or fence. August’s mother, a very private person, used the fence to keep the children in and others out. As in the movie, the family had very few visitors.

The concept of the fence also applies to Wilson’s competitive spirit, what he called a “warrior spirit,” a personality trait that he admired in his mother. August loved to play baseball, and absolutely detested losing. When at bat, he always swung for the fence. Like Troy, he was determined to hit a home run or strike out trying.

August’s childhood neighbor, Charley Burley, is a not just a key part of the story, but the prototype for Troy. August did not get along with his German immigrant father and found a substitute father figure in his neighbor, Charley Burley, a talented fighter who could have been world champion. Charley wound up, like Troy, as a garbage man working for the city. Unlike Troy, however, Charley was not bitter. His “warrior spirit” allowed him to take a punch, get back up, and keep going.

In some ways, ironically, Troy is also based on August’s mother, Daisy, a strong woman whom August admired for also having a “warrior spirit.” Daisy was bitterly disappointed when, at the age of 17, August dropped out of high school and showed no signs of getting his life together. Daisy harassed him so much that, directly or indirectly, she drove him from the house. August later wrote a powerful, unpublished poem about this “expulsion.” Like Cory, he joined the army, and served briefly in the elite Army Airborne School. August’s brother Edwin told me how proud he was when he saw August come home wearing his blue military uniform—the same color as Cory’s Marine uniform.

In “Fences,” ordinary Pittsburghers are part of the story. August was a keen observer and listener, who carefully observed the way people spoke. One of August’s girlfriends told me that, while walking up Centre Avenue, they overheard that famous line, “Who the hell say I got to like you?”

Pittsburgh is part of the story in other ways. The neighborhoods, the streetscapes, and much of the atmosphere have been carefully, and correctly, rendered. Troy’s house sits back from the street, like August’s house. Of course, one is missing the polluted air from the mills, whose pervasive soot would have made Rose’s tidy house difficult to keep clean. Also, in those years, Pittsburgh garbage trucks were open, or “top loading.” The garbage men would turn over large oil drums full of garbage onto a large burlap cloth. They would fold up the four corners of the cloth and swing the heavy bag, dripping with smelly, wet garbage over their shoulder, climb up the ladder to the top of the truck and throw in the garbage. However, as in the film, blacks did not drive the trucks until concerted protests broke that white monopoly in the 1950s.

The references to baseball, of course, are accurate. Pittsburgh had two of the best teams in the Negro Leagues—the Pittsburgh Crawfords and the Homestead Grays—that boasted Josh Gibson, Satchel Paige, but also scores of less heralded icons like Troy Maxson. While the integrated scene of black and white children playing stick-ball on the street is a bit of a stretch, it does reflect the diversity of the Hill District in the 1950s.

In this way, the film succeeds in its portrayal of Pittsburgh, and complements many of the scenes of Wilson’s original play. With all these qualities, it is not surprising that the film is already a major success. With so many challenges facing our nation, “Fences” offers a glimmer of hope, capturing resilience and perseverance in the face of resistance.

Larry Glasco is Associate Professor of History at the University of Pittsburgh. He has published extensively the history of Black Pittsburgh and August Wilson. His principal publications include August Wilson: Pittsburgh Places in His Life and Plays (2011, with Chris Rawson), “Teenie Harris: A Biography,” in Teenie Harris, Photographer: Image, Memory, History (2011); and The W.P.A. History of the Negro in Pittsburgh (2004). He is currently completing a biography on August Wilson, focusing on his Pittsburgh years.

Comments on “Capturing the Spirit of Black Pittsburgh: A Review of “Fences””