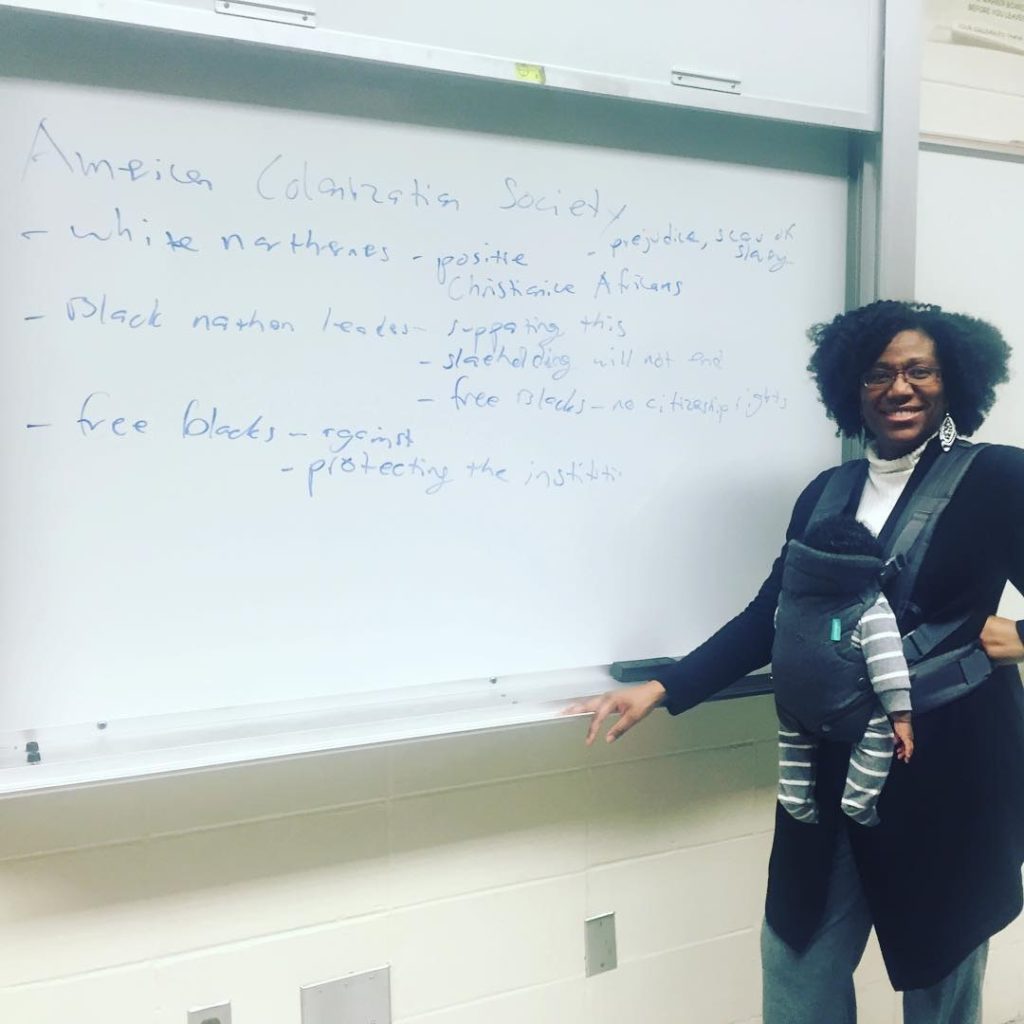 Take a good long hard look at that picture above.  What do you see?  Do you merely see a mother and child?  Are you gazing upon a woman, smiling, with her infant child lulled to sleep in a carrier?  Eyeing the dry erase board that takes up most of the picture, are you watching someone celebrate the triumph of both teaching and mothering at the same time?  Are you staring at a representation of Black motherhood unbeknownst to some? After careful consideration, of presumably symbolic posturing, do you find yourself studying the dichotomous if not tenuous nature between the workforce and motherhood?  Are you indeed surveying the reason why we need paid maternity leave?  Just what do you see?

I’m asking because when I posted this picture to Facebook (and tagged my lifemate Myron), one of his FB friends (let’s just call her Elizabeth) made the following comment: “You go, mama! (But as an aside: parents in the US need and deserve paid maternity/paternity leave! We need to catch up to the rest of the world.”  Apparently she saw the issue of workforce discrimination against mothers brought to the forefront.  Our society has constructed femininity to oppress and marginalize women within the workforce and constructed motherhood to eradicate us right out of it.  Absolutely! But me…proudly wearing my cutie while imparting knowledge into my students was a symbol of workplace discrimination against mothers and why we need paid maternity leave?  Really?  She saw that in my picture??

But as someone trained in the field of Women’s Studies, I realized that it was not the picture of me wearing my cutie that was in question. By use of the language “You go, mama!” Elizabeth was not even denying my agency and power.  No. Elizabeth had just sought to call out the obvious – the narrative in which I had been inserted.  Although at the micro level, I see me – a professor who routinely takes her children to class to office hours, and campus culturally enriching events, on the macro level the narrative that I am inserted is mothering/motherhood vs. workforce/outside-of-the home labor.

Historically women were relegated to the domestic sphere and men to the public sphere for the very reason that all women were socialized to be mothers – for the primary function of nurturing and raising children.  At the very base of our society’s definition, mothering includes the act of birthing and raising kids which was done in the home and not outside of it and furthermore could not, apparently, be done in conjunction with labor within the workforce. This further reinforced the idea that mothers were to the workforce like oil to water – the two just do not mix.  (Just google the phrase “mothers discriminated against in the workplace” and you will see tons!  My search yielded 157,000 results in 0.47 seconds.)

In this society we give persons who incubate and birth children the term mother.  So for me, mothering is not this socialized notion of innate nurturing whereby as someone sexed female I “instinctively” become a nurturer.  No.  For me, mothering is more of a continued care, a care that is learned over a time – started at conception, takes shape through pregnancy, and continues throughout the child’s life.  In practice this care is illustrated by the time I spent with my sons, which includes my place of work.

It is a privilege for me to do mothering where I am able to combine the home and work sphere at a time when mothers are unsupported by their workplace.  So Elizabeth’s comments rightfully remind me that although I see myself mothering in a very special and unique way, mothering is forever complicated and political.  Although the Family and Medical Leave Act of 1993 established leave for pregnant and postpartum women, the job is still not guaranteed.  While out on what they thought was secured 6-week maternity leave, both of my sisters-in-law found that they had been replaced in their paid positions.

In academia, many female scholars are told that “serious scholars” are not mothers.  This idea stems from the sexist workplace in which it is planted that still tells mothers they should be home with their babies leaving those unattached from the “emotional worries” and “emotional duties” of motherhood [that will supposedly cloud their judgment (please insert side eye)] to do the intellectual work of higher education.  Not only having my son in my place of work but teaching with him flies in the face of that. I see myself rebelliously mothering in academia, a profession that routinely discourages professors from becoming mothers and shaming professors if they do.

Thinking and looking back at the opening picture, within this context of higher education whereby my infant child is soaking up a knowledge of self (literally because I am teaching African American history here), my Black mothering is activism, agency, POWER!

Comments on “A Pedagogy of Black Mothering: Literally and in Practice”