At the turn of the 20th century historian Frederick Jackson Turner argued, “[t]he frontier is the line of most rapid and effective Americanization.” His interpretation of an east to west moving frontier focused on the Europeans experience. It also shaped how generations of Americans perceived not only the history of the American West and creation of the United States, but also which people’s stories were central to that American identity. Since Turner delivered his thesis in 1893 historians of the American West have challenged its conclusions and have worked to uncover the missing and hidden histories buried by a master narrative informed by Manifest Destiny. From this research came new western history, borderlands studies, and settler colonialism theory, which serve as tools that challenge and disrupt the master narrative. Yet as Anna-Lisa Cox’s The Bone and Sinew of the Land persuasively argues the lives of African American pioneers in the Old Northwest remain largely untold even by recent histories.

Cox refutes the idea that there were few African Americans living in the Old Northwest Territory or those who did resided only in cities. Her research demonstrates that black settlements dotted the vast expanse of the region. While historians have long recognized the existences of these communities, they have largely considered the individuals and communities to be outliers. Cox’s research dispels this and unfolds a history of African American pioneers attaching their collective experience to a national history of the United States.

Immediately clear is how Cox’s positions black pioneers as part of a national story as pioneering Americans and as such essential participants in the creation of American identity. Her title The Bone and the Sinew of the Land is a phrase that hearkens to African American leaders who, in the 1840s, borrowed it from former president Andrew Jackson’s farewell address. At the time Jackson’s line referred only to white settlers omitting the struggle and accomplishments of black pioneers whose experiences African American community leaders wanted to highlight. By echoing this phrase Cox centers the Black pioneering experience in American history.

The structure and connective tissue that bones and sinews evoke serve as an apt method for Cox’s sources and research. Employing the United States census data, newspapers, and local histories as her skeleton, Cox presents the case of that numerous African American farming settlements existed throughout the early republic and antebellum Old Northwest. A map of these settlements and accompanying listing of the settlements constructed from these sources provide a tidy visual of this data. Cox also relies on a synthesis of secondary sources to connect and flesh out her narrative as she reconstructs a hidden human story of the Old Northwest Territory. While each of Cox’s chapters shares a common thread linking them to a larger narrative, part of the book’s strength is that the nine chapters could be read as individual vignettes seeped in a particular experience of enslaved and freed Black pioneers. Taken together they present nine understudied aspects of the African American pioneering experience that dispel the notion that African American were not present on the frontier; that the north was a safe haven for African American individuals; and that the American democratic experiment is one that continuously moves towards equality without continuous struggle.

Cox inserts several African American pioneering families including the Griers, Hawkins, and Lyles among others, into a diversifying yet still largely whitewashed narrative of white settlement of the Old Northwest. This is accented by Cox’s chapter titles each of which derive from either the Declaration of Independence, the Preamble to the United States Constitution, or the Bill of Rights of the United States Constitution. By doing so Cox juxtapositions the inspiring words of these foundational documents with the starkly different lived experience of African American pioneering families.

Chapter one, “Life, Liberty” introduces the family of Keziah and Charles Grier as they clear their fields in Gibson County, Indiana. The Grier’s serve as a central thread pulling the rest of the narratives through fifty years of the development of the Old Northwest Territory. As Cox explores the foundations of the Territory, why it existed, and the laws that governed the vast expanse it becomes apparent that while the Grier’s were free they were not yet completely safe or secure. Many others continued to be held in bondage throughout the territory, a region where slavery was supposedly banned. While slavery was outlawed, loopholes could be and were exploited. Cox notes at the time of its statehood Illinois held “the highest number of people in bondage of any of the Old Northwest territories or states.” 1 This was in large part thanks to the salt works that dotted southern Illinois. 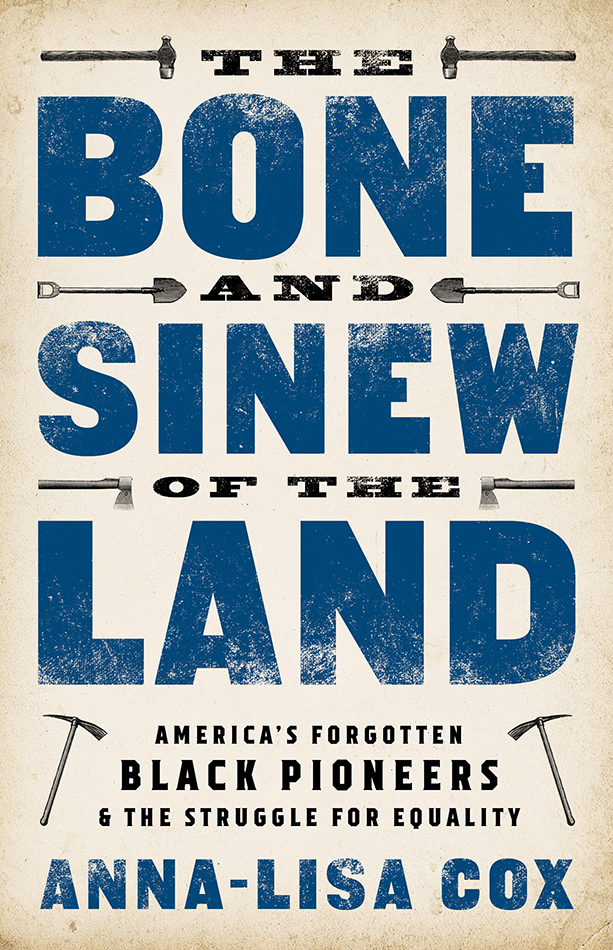 Through great difficulty some, like Cornelius Elliott, efforts freed themselves and their family from bondage. Maintaining that freedom was far from guaranteed. Across the United States in the 1820s and 1830s territories and states passed laws aimed at curbing liberally applied interpretations of who could be considered a citizen. These “Black Codes” specifically targeted African Americans restricting and eliminating citizenship rights. States carved from the Northwest Territory, originally lands reserved free from slavery, served as an example for others in creating their own discriminatory laws. Cox writes, “the Northwest Territory states and their exclusion laws were cited by Tennessee lawmakers in the 1830s to strengthen their arguments for prejudiced laws against free African Americans in Tennessee.”2

In The Bone and Sinew of the Land violence dominates many of the interactions between whites and Blacks, yet Cox notes several instances of Black and white individuals aiding one another. These stories are overlaid with a larger narrative of Black Laws, fights over the Fugitive Slave Law, the rise of the abolitionist movement, and growth of African American farming communities. By the 1850s the passage of the Fugitive Slave Law deepened fractures in the country. While the Griers worked their land they and a handful of their white neighbors worked in defiance of the law to hid refugees fleeing north. At the same time as they covertly fought racist laws families like the Grier built churches and strengthened communities despite the prejudice and racism they confronted on a daily basis. Yet progress in the states of the Northwest Territory was never assured.

Cox’s narratives provide a face and importantly names to the Black pioneering experience. The concise volume creates space for more scholarly inquiry into these missing stories of the early American West. Historians are limited by their sources and Cox notes that her work is focused mainly on wealthy African American farmers who had the means to establish larger homesteads and leave materials behind. While this gap leaves the experience of less well off African American pioneers it provides a needed window recognizing the contributions of these pioneers.

A larger gap primed for increased scholarship exists in terms of relations between African American pioneers and Native Americans. American identity is a complex concept and the history of a person, a community, region, or nation is far more complicated that a single book can cover. One especially promising avenue of research that is noted only briefly concerns the intersection of African American settlers and Native Americans like the Miami, Illini, Potawatomi, Ojibwe, Meskwaki and dozens of other tribes that settlers both Black and white displaced as they established their communities. Cox explains that white and African American settlers shared many of the same difficulties of the frontier.

And as the territory was opened for sale, free African-American pioneers were as vulnerable to Native American attack as whites, for they were a part of the same settlement movement that was destroying their First Nations’ homes and livelihoods.3

While scholars of Indigenous North America have already begun to engage in this research, especially regarding the Cherokee and Cherokee Freedmen, tribal relations with African American pioneer communities in the Old Northwest remain understudied. Here the theory of settler colonialism provides possibilities for how future research could build on Cox’s narratives. Scholars of settler colonialism recognize the complicated nature of the relationship between African American settlers Native American tribes. While whites largely came willingly and sought opportunities to settle in North America, enslaved Africans were forced to North America. In many cases they became essential but largely unwilling partners in the settler colonial project and displacement of Indigenous groups. Yet some African Americans pioneers were able to seek opportunities to claim lands, like white settlers, taken at gunpoint from Indigenous peoples. Still further complicating the Black pioneering narrative, is that as with white fur traders and settlers some African Americans married into Native American families. The resulting children of mixed-African and Native American heritage created a complex racial identity that white American authorities sought to police.

Still, before these investigations into these narratives can continue historians and the general public must first recognize the simple fact that African-American pioneer communities existed. Cox delivers on this. The Bone and the Sinew of the Land provides fertile grounds for scholarly research, but it is also written with a more broad and general audience in mind. In doing so it provides an introduction to the uninitiated, a catalyst for new scholarly inquiry, but most importantly exposes and amplifies the stories of African American pioneering families.

Jacob Jurss is a historian of early North America and is a community faculty member at Metropolitan State University in Saint Paul, Minnesota. Follow him on Twitter @jakejurss.