loading...
By Elise A. Mitchell November 8, 2018 Comments Off on Making Race in British Colonial North America

When confronted with three eighteenth-century newspaper advertisements seeking a missing man from Connecticut named Ishmael Mux of “a white Complexion,” a missing Pennsylvanian named John Daily who had a  “black Complexion, bushy Hair,” and a man who went missing on his way to North Carolina named Andrew Vaughan with a “red” complexion, most readers would presume that their complexions, “white,” “black,” and “red,” indicated their race. However, as Sharon Block shows in her latest book, Colonial Complexions: Race and Bodies in Eighteenth-Century America, to eighteenth-century readers:

White, black, and red complexion did not automatically parallel European, African, and Native American heritages, respectively. In fact, Ishmael was described as mulatto; John as Irish; and Andrew was listed as an infantryman in the British 40th regiment, was born in Philadelphia, with no nationality or ethnicity specified. Skin and hair appearance were features related to, but not constitutive of, ethnic or national background (60-61).

This is but one of many examples Sharon Block uses to illustrate how the relationships between bodily descriptions, ethnicities, and racial meaning are not transhistorical, but developed through contextually specific discourses that have changed over time (83). Block, a digital humanist and historian of race, gender, rape, sexuality, and the body, examined thirty-nine British North American colonial newspapers published between 1750 and 1775 and analyzed over 4000 advertisements for missing enslaved and free people. Her ambitious study of these advertisements reveals how British North American colonists constructed race through quotidian discourses. Colonial Complexions is a crucial contribution to the history of race and a noteworthy model for digital age historical methodology.

For decades, scholars have investigated how and when our understandings of race as a category of human difference emerged. Block builds on foundational work by Winthrop Jordan and more recent scholarship by historians and literary scholars, including Kim Hall, Joyce Chaplin, Roxanne Wheeler, Jennifer Morgan, Rebecca Earle, and, most recently, Ibram Kendi, who have elucidated the early modern conceptualizations of human difference that informed the racial categories we use today. Accordingly, Block takes early modernists’ consensus on the history of race as her point of departure, concurring that before the nineteenth century, the racial categories of “black” and “white” were not yet fully realized. Thus, Colonial Complexions interrogates the implicit meanings of the terms British colonists used to describe difference. She posits the last quarter century before U.S. independence as a transitional period in which race was still being constructed in vernacular early American culture.

To provide context, the first chapter familiarizes readers with early modern humoral theories that circulated amongst Europeans during the seventeenth and eighteenth centuries. Elite eighteenth-century Europeans believed complexion signified the body’s internal workings, including health, character, and behaviors (11). Europeans used humoral theory to assess and selectively apply particular physical descriptors to people of different social statuses and overlapping ethnic, regional, and gender identities before racial categories were solidified in the nineteenth century. Block shows that common British colonists shared these beliefs and relied on humoral theories to describe Europeans, Africans, and Native Americans when they crossed the Atlantic.

The subsequent four chapters form the core of Colonial Complexions and demonstrate how metropolitan humoralism translated to the quotidian North American discourses evidenced in missing person advertisements. In these chapters, Block describes the broad discursive patterns in missing person advertisements and demonstrates their implications by performing closing readings of selected advertisements. Using this structure, Block deftly moves between macro and micro-analyses to decode and identify the late-eighteenth-century discourses and understandings of bodily difference that gave way to modern racial taxonomies. For example, by quantifying the frequency with which colonists applied physical descriptors, such as “well made” “stout,” and “lusty,” to different social groups,  Block reveals that that these words often connoted free or slave status and signaled whether a person was of European, African, or Native American descent. However, the terms used to describe complexions, like “dark,” “black,” “fresh,” “white,” and “ruddy,” reflected humoralism and did not have fixed or mutually exclusive racial meanings as they do today. By quantifying and contextualizing these kinds of descriptive patterns, Block illuminates the contemporary connotations of the phrases colonists used to describe physical appearance. 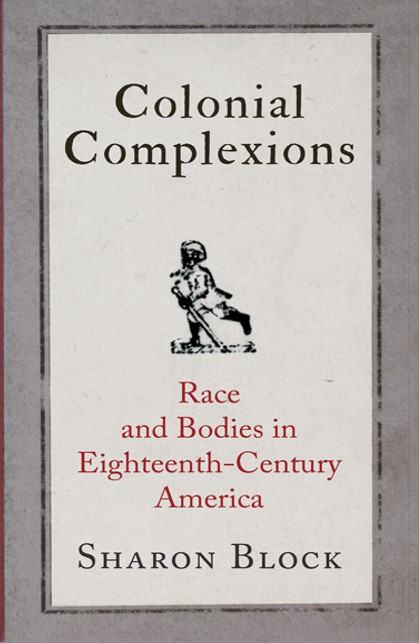 Block also reveals how non-physical descriptors came to carry social and racial connotations. For example, Block’s analysis of missing persons’ names reveals that diminutive names, like Fanny and Will, would have implied that the missing person was enslaved. She also unpacks more explicitly racialized and gendered terms, such as “wench,” “squaw,” and “negro,” and links them gendered conceptualizations of birthplace, national or ethnic belonging, and free and unfree status. For example, “negro” signified African descent and enslaved status, even though it was not necessarily tied to a black complexion or other physical features associated with Africans. Block explains that colonists used qualifiers with “wench” and “negro,” such as commentary on birthplace, clothing, social status, complexion, speech, and hair texture, to assert or conceal a person’s enslaved or free status. Likewise, she shows how colonists’ representations of speech patterns, affect, behavior, and dress facilitated the racialization of character traits. By historicizing British colonists’ discourses about European, African, and Native American people, Block traces the antecedents of modern racial ideologies.

Block’s scrutiny is not limited to eighteenth-century descriptions of human difference. She also discourages scholars from anachronistically imposing the modern racial categories of black and white on early modern people. She stresses that using terms like “black” and “white” apply modern racial taxonomies to the early modern period and obfuscate both the history and social construction of racial ideologies. Her epilogue provides timely present-day examples of the dangers of essentializing modern racial categories, such as the racialization of DNA profiles. To avoid the anachronistic application of “black,” “white,” and “red” as racial categories, Block chooses to use “African descended,” “European descended,” “Native American descended,” or “specific national or cultural terminologies,” such as Angolan, Eboe, Irish, or Creek (8). Yet, her admittedly awkward set of phrases risk reproducing the ahistoricity she seeks to critique. Her use of African and European descent rely on late twentieth-century conceptualizations of the African diaspora and Europe, which remains in flux amongst academics, who have often isolated or marginalized Iberia and may be unraveling in popular discourse with the rise of Euroscepticism. Native American is also late twentieth-century terminology and its acceptance remains fraught. Recently, historians, notably Michael Witgen, have reprised indigenous vocabularies to challenge the Eurocentricity, ahistoricity, and ambiguity of the tribal categories early Americanists have traditionally employed. Likewise, historians, including Michael Gomez, Alexander Byrd, James Sweet, and Gwendolyn Midlo Hall have demonstrated how African ethnicities were socially constructed over time in and outside of Africa and were not necessarily immutable, transhistorical, or politically or culturally bounded, even when enslaved people self-reported them. “Black,” “white,” and “red,” do not resolve the issues that African, European, and Native American raise, but they are used to do a different kind of work.

The linguistic dilemma that Block contends with brings us to the question: Can we find a conscientious vocabulary for discussing early modern people that reconciles the history of racial categories and the intellectual and political imperative to articulate the contours and continuities of black life across time and space? Block warns us of the perils of imposing modern racial categorizations on early modern subjects. However, scholars have used “black” and theorized blackness expansively in order to draw historical throughlines of political, cultural, and intellectual traditions, articulate intergenerational experiences of violence, erasure, commodification, and being. Using black interchangeably with African, African-American, and other terms that denote the African diaspora across temporal and geographic contexts is also a discursive strategy that decenters dominant Eurocentric historical periodizations, colonial and state geographies, and linear notions of time and progress. Block’s text unequivocally demonstrates that we can not rely on modern racial taxonomies to interpret eighteenth-century sources. Nevertheless, “black” has been productive for interdisciplinary conversations and political projects that exceed, unsettle, and refuse the purchase and prerequisites of historicity. The lexical quandary that Colonial Complexions brings to the fore provides an opportunity for further discussions about terminology between those in and outside of the field of Early American History.

Colonial Complexions has opened the door for scholars to pursue projects that historicize vernacular bodily descriptions and how they translated across fluctuating imperial boundaries in the eighteenth century. Some of Block’s observations about regionally specific terms like “negro cloth,” which only appeared in South Carolina’s newspapers, could be contextualized using the substantive online and print collections of British Caribbean newspapers, where those terms may appear more frequently. Her examination of “negro” and contemporary ideas about African bodies could be put in conversation the French Atlantic historiography on “négre” and the black body. French advertisements from Saint Domingue’s newspaper Affiches Americaines, which are archived in the searchable “Marronnage in Saint Domingue (Haïti)” database, and ongoing digitization projects that include bilingual French-English Caribbean newspapers offer opportunities for transimperial studies using Block’s methods. Block’s engagement with scholarship about bodily descriptions that circulated outside of the British colonies, particularly her footnotes referencing Latin American historiography, opens up possibilities for transimperial studies about the emergence of race in popular discourse in #VastEarlyAmerica and beyond.

Colonial Complexions will be an enduring contribution to digital age historical methodology and interpretations of early Atlantic newspapers as digitized eighteenth-century British newspapers and databases of British runaway advertisements continue to become available. Block used the model of machine-driven text mining and relied on a largely digitized archive, but read, clustered, and identified patterns in the 4000 advertisements manually. This enabled her to modify her categorizations, consider the advertisements in context, and draw connections with non-periodical sources, which enriched her study. Her innovative methods show how traditional research practices, digital archives, and digital historical methods can complement one another. Her quantitative insights backed by the depth and breadth of her contextual knowledge reveal the limitations and utility of missing person advertisements, which are one of the largest and most frequently cited sources of information about individual enslaved people. Currently, digital humanities and public history projects, like Freedom on the Move, are employing crowdsourcing to catalog databases of enslaved people featured in missing person advertisements. As these kinds of projects continue to come to fruition, Colonial Complexions ought to serve as a touchstone for interpretation and judicious engagement with these sources.

Elise A. Mitchell is a Ph.D. candidate in Atlantic World History and Caribbean and Latin American History at the Department of History at New York University. Her dissertation, "Smallpox and Slavery: Morbidity, Medical Intervention, and Enslaved People's Lives in the Greater Caribbean," considers how smallpox quarantines, treatments, and inoculations affected enslaved Africans during the seventeenth and eighteenth centuries. Her broader research interests include the history of the black body, Caribbean slavery, the history of medicine, history of public health, and gender and women's history. Follow her on Twitter @byeliseam.