In a speech at the Hudson Institute on October 4, 2018, Vice President Mike Pence all but declared a new Cold War on China. Though this act of aggression received little attention in the mainstream media, it is the latest in a series of political and economic positions and policies of deep domestic and international significance. These include the renegotiation of the North American Free Trade Agreement into the U.S.-Mexico-Canada Agreement, the re-imposition of trade sanctions against Iran, the opening of the U.S. embassy in Jerusalem, and the notorious Executive Order 13780 that places limits on travel to the United States from countries including Yemen, Somalia, Syria, and Libya.

These realities—coupled with the intensification of state and police violence against Black and minoritized people generally and Black men particularly, advancing white nationalism, increasing disregard for and disrespect of women and queer people, continued erosion of wealth and income among racialized populations, and the violent crackdown on immigration—require a renewed consideration of internationalist solidarity, movement building, and activism against imperialism, racism, and capitalist exploitation. Likewise, it is imperative to understand how Cold War social relations, geopolitical concerns, and domestic and foreign policy continue to shape our contemporary reality. Here lies the significance of Anne Garland Mahler’s From the Tricontinental to the Global South: Race, Radicalism, and Transnational Solidarity. 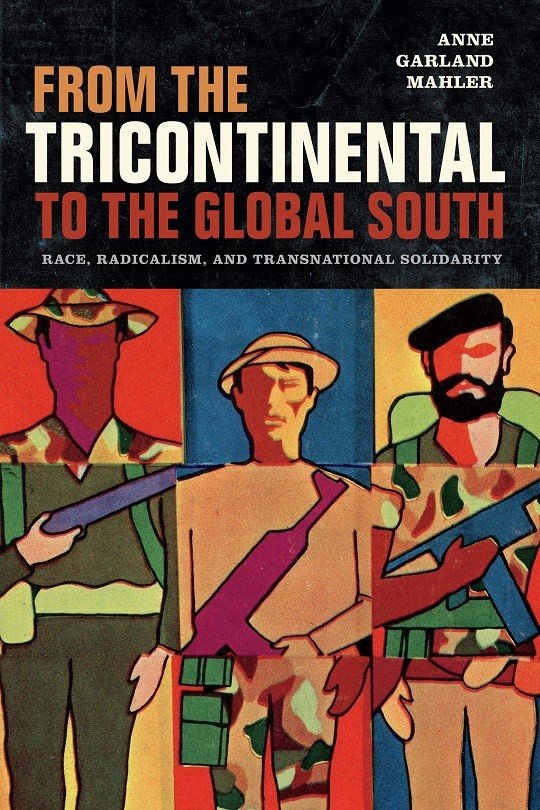 In her timely text, Mahler traces the roots of the “Global South” concept to the Tricontinental by extending the latter’s time, space, and relations, thus providing new insight into historical and contemporary Cold War, Black internationalist, and deterritorialized racial politics. In doing so, Mahler rescues the Tricontinental from relative obscurity and disentangles its legacy from postcolonialism which, she claims, is a distinct and often contrasting perspective. By focusing on aesthetics, ideology, discourse, and affective modes of solidarity, she makes the case that while the Tricontinental Conference of 1966 and the formation of the Organization of Solidarity with the Peoples of Africa, Asia, and Latin America shortly thereafter represented the formalization of Tricontinentalism, it exceeds these formations and has a much broader significance beyond the Cuban state and the Cuban Revolution (72-75). Tricontinentalism is defined as a transnational political imaginary and a global resistance subjectivity based on a central critique of racism and imperialism, a deterritorialized conceptualization of imperial power, and the operationalization of color as an abstract racial signifier that demarcates a collective political ideology and collective cause (23). The text particularly attends to what Mahler calls “trans-affective solidarity,” a model in which “the ideology of Tricontinentalism is both upheld by and produces as surplus value an imagined transnational, transethnic, transracial, and translinguistic affective encounter” (109). As well, From the Tricontinental to the Global South offers a “Tricontinentalist reading praxis” that invites future scholars to rethink and reimagine movement-era texts through the lens of Tricontinentalism (15).

The introduction effectively introduces the key themes, concepts, and organization of the book, and the first chapter, “Beyond the Color Curtain: From the Black Atlantic to the Tricontinental,” maps the precursors to, continuities of, and deviations from Tricontinental thought in the twentieth century. Next, “In the Belly of the Beast: African American Civil Rights through a Tricontinental Lens” underscores the importance of Black Americans to Tricontinentalist discourse through an examination of the Tricontinental’s engagement with the U.S. Civil Rights struggle through a variety of media, especially film, posters, and articles. Chapter three, “The ‘Colored and Oppressed’ in Amerikkka: Trans-Affective Solidarities in Writings by Young Lords and Nuyoricans,” models a “Tricontinental reading practice” and develops “trans-affective solidarity” as a conceptual framework to explain how the Young Lords moved the Tricontinental beyond the Cuban state and its sexist and homophonic discourse, the circulation of Young Lord writings through OSPAAAL publications, and the presence of a Tricontinental vision in Nuyorican creative works.

“‘Todos Los Negros y Todos Los Blancos y Todos Tomamos a Café’: Racial Politics in the ‘Latin, Africa’ Nation,” the fourth chapter, explains the limits of Tricontinental discourse in Cuba, manifested in the disjuncture between Cuba’s domestic policy and practice toward African Americans and Black Cubans on the one hand, and its role in and state discourse about the Angolan Civil War, on the other hand. At the same time, Mahler argues, Tricontinentalism was used to critique this very contradiction. Relatedly, the 1970s oversaw a shift in focus from the U.S. South to apartheid South Africa in the 1970s which more fully globalized the concept of the “South” as a political and affective formation. Chapter five, “The (New) Global South in the Age of Global Capitalism” returns to the contemporary moment to reveal the aesthetic and ideological elements of Tricontinentalism in contemporary social movements, including the World Social forum, Occupy Wall Street, and Black Lives Matter. According to Mahler, the return of aspects of the Tricontinental points to a renewed commitment to transnationalism and global conceptualizations of “power and resistance.” This is notwithstanding alter-globalization movements’ colorblind discourse and racial justice movements’ emphasis on reforming the state to the detriment of a robust critique of global capitalism (200-201). The concluding chapter, “Against Ferguson? Internationalism from the Tricontinental to the Global South,” offers a hopeful reading of the Black Lives Matter movement and the potential of academics to contribute to the reemergence of the Tricontinental as an imperfect but necessary model for conceptualizing.

The text is primarily organized thematically, with each chapter moving from a broad overview to close readings of cultural artifacts, including poems, novels, films, ephemera, and posters, that articulate the Tricontinental approach and vision. These include Santiago Álvarez’s influential documentary Now, Young Lord Party articles—some of which appear in OSPAAAL publications—that utilize Tricontinental abstract signifiers of color, whiteness, and imperialism, important Nuyorican literature like Piri Thomas’s Down These Mean Streets, Nicolás Guillén Landrián’s Coffea Arábiga, and a host of OSPAAAL posters and those that mimic its style, like Shepard Fairey’s Barack Obama “Hope” poster and Michael McBride’s 2014 “Michael Brown: Victim of Police Brutality.” The chapters follow a loose chronological order, moving from precursors to Tricontinentalism, to different enunciations of the Tricontinental, to the decline of Tricontinentalist discourse, to the resurge of Tricontinental ideologies and aesthetics in grassroots and horizontalist global social movements and especially in the Global South critical concept. The first chapter deviates from this structure in that it starts with the “afterlives” of Tricontinentalism—network power theory, postcolonial studies, Global South studies—then shifts to a discussion of its “roots,” specifically the Afrocriollo movement (Negrismo and Negritude) and the Harlem Renaissance. As such, a more accurate subtitle would be, “To the Global South from the Black Atlantic.”

From the Tricontinental to the Global South is particularly effective in its close reading of cultural texts and thus makes a significant contribution to cultural studies and cultural criticism. In centering Latin American and Black Radical intellectual and artistic traditions in its discussion of left transnational politics, anti-capitalism, and anti-imperialism, it effectively shifts the focus from Western Marxist traditions to racialized, oppressed, and dispossessed scholar-activists. Africana Studies, Latin American Studies, Ethnic Studies, Black Power studies, and subfields of history, sociology, and political science that focus on power relations, political organizing, and social movements will benefit from this framing.

Issues arise with the text in its intermittent over-reliance on secondary texts and interpretations to the detriment of fresh and original analyses. This is particularly the case with the treatment of World-Systems analysis (which also neglects attention to Oliver Cromwell Cox) and decolonial theory (which leaves out key thinkers including Nelson Maldonado-Torres, Sabelo Ndolvu-Gatsheni, and Maria Lugones). There is also a tendency to gloss over the realities of repression and subjection of internationalists, radicals, and leftists; though COINTELPRO is mentioned, there is no attention given the ways that international linkages facilitated forms of infiltration by the CIA and FBI, most notably by Richard Gibson (who is mentioned uncritically throughout the text) and Richard Aoki. Moreover, the importance given to affective relations and cultural production as the basis of Tricontinentalism tends to downplay other emphases, including autonomous economic development, guerilla struggles against continued colonization, and antiwar and nonproliferation demands, that sutured together disparate races, ethnicities, and nationalities against U.S. and Western imperialism. The text seems to imply that it is only the artistic and sentimental that can traverse space, time, and difference.

Mahler’s recovery of an epistemological, ethical, and political orientation that has been elided and erased by phenomena including neoliberalization, multiculturalism, postcolonialism, and the generalized marginalization of the left “of color” is immensely significant to understanding and analyzing contemporary social movements. Likewise, the text offers Tricontinentalism and a “Tricontinental reading praxis” as a method of reorienting academic study toward considerations of anti-capitalism, anti-imperialism, and struggles against racialized oppression. Mahler does not glorify or idealize the Tricontinental, but rather examines its historical and contemporary relevance to envisioning and organizing for a more economically equitable, racially just, and human-centered world.

Charisse Burden-Stelly is an Assistant Professor of Africana Studies and Political Science at Carleton College. She received a PhD in African Diaspora Studies in 2016 from the University of California, Berkeley. Her areas of specialization include race and political economy, Black political theory, antiblackness and anti-radicalism, and Black radical thought.

Comments on “Reclaiming the Tricontinental: Transnational Solidarity and Contemporary Struggles”