loading...
By Janell Hobson February 3, 2015 Comments Off on Why the Women of Hip-Hop Are Crying: Black Women’s Hip-Hop Histories

There is something deeply touching and yet somewhat enraging when reading Missy Elliott’s post-Super Bowl halftime performance tweet: 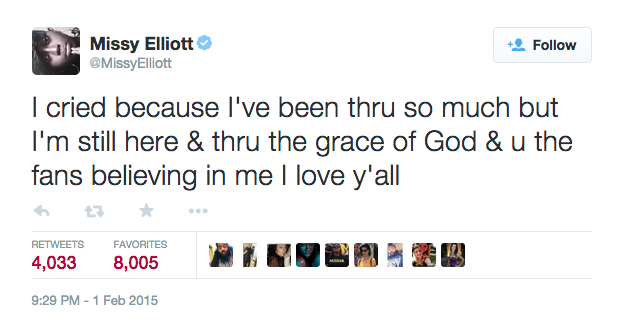 So many of us were surprised to see the 43-year-old rapper and hip-hop producer perform alongside the headliner, pop star Katy Perry.  She had been battling with illness and had remained off-stage for quite some time. She had been M.I.A. for so long, some took to Twitter to ask who she was. It’s still not clear whether such inquiries were based in genuine musical ignorance or in a satirical reenactment of the earlier ignorance this year when some inquired about the identity of Beatles legend Paul McCartney when he collaborated on a single with rapper Kanye West.

Still, as much as I appreciate Elliott’s tears of joy with her reentry onto the pop music stage via the big game of the Super Bowl, I can’t help but view this moment as the bittersweet relegation of one of our biggest and most talented black women rappers to “supporting acts” of white pop stars. As much as I enjoy Katy Perry’s confection-laced pop songs, there is something rather jarring in seeing such a fluffy, downright cartoonish pop singer headlining a halftime show, someone who is so self-aware of her superficial talents that she relied on the heavier and deeper talents of black musicians – from Lenny Kravitz to Elliott – to ground her performance in gravitas.  However, from the tweets Elliott posted, she seemed genuinely appreciative and even surprised to get such a warm reception.

Are black women in the hip-hop game feeling their erasure? Are her tears somehow related to the tears spilled by rappers Nicki Minaj and Azealia Banks a few months ago? Their emotional outbursts were a sobering moment that writer Matthew Trammel identified as the year “Nicki sold her image and Azealia screamed her identity. But for all their scathing bars, pointed acceptance speeches, and social media rants, they were still both reduced to tears by December.”

In a cultural environment that witnessed Minaj doubling down on the stereotypes of black female hypersexuality and Banks railing against the cultural appropriation of hip-hop by the likes of white Australian rapper Iggy Azalea, while her own highly skilled Broke With Expensive Tastes exists outside the realm of mainstream pop music, black women’s hip-hop history is very much subject to distortions (Minaj’s hyperbolic plastic image), silencing (Banks’s underground music and tweets that are often dismissed as the ranting of a very angry black woman), and erasure (folks asking: “Who is Missy Elliott?”). Black women as participants in hip-hop culture – from fans to artists to promoters to scholars – have always battled against their marginality in the male-dominated space of hip-hop, and rappers like Missy Elliott and those who came before her – Salt-n-Pepa, Queen Latifah, Lauryn Hill – carved out a space for black feminist expression and validation.  Despite the extreme sexual objectification of women in the genre, they often created those counter-spaces to articulate rage (Eve’s “Love is Blind“), self-affirmation (Monie Love’s “Monie in the Middle“), community engagement (Queen Latifah’s “U.N.I.T.Y.“), and sexual agency (Salt-n-Pepa’s “Shoop“).

It’s quite tempting to see the ascendance of someone like Iggy Azalea as enabling the silencing of black women’s histories, but this too is complex.  The descriptor of Azalea as a “unique” voice of white women in hip-hop also erases the early work of white women in rap music: think Teena Marie’s “Square Biz” or Blondie rapping on “Rapture.” Hip-Hop has long since traveled global circuits – from M.I.A.’s global South articulations to Krudas Cubensi’s Afro-Cuban queer feminist politics. Eventually, the originators of the music – African Americans who already were influenced by the global circuits that found their way to the South Bronx courtesy of the Caribbean – would have to concede to these transnational and commercial transformations.

Less palatable, of course, is the way that racial and sexual inequalities place value systems that promote white mediocrity over black talent or that elevates those women whose bodies most conform to normative white supremacist and capitalist heteronormative beauty standards. Fortunately, rappers like Missy Elliott – who started on the music scene as a plus-sized darker-skinned black woman – took control over her image and projected some of the most visually innovative music videos that playfully and subversively positioned her body through an alternative Afro-Futuristic black aesthetic, mixing cyborg imagery with empowering positions for the black female body (e.g. see “The Rain [Super Dupa Fly]“). 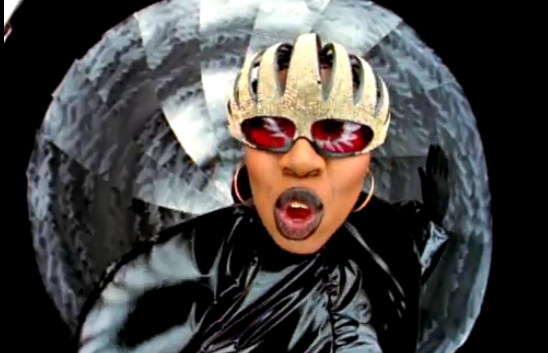 While we can always travel down nostalgic memory lanes and find historical evidence of black women’s subversive performances, the future still remains uncertain. Between Nicki Minaj’s tears of pain, Azealia Banks’s tears of frustration, and Missy Elliott’s tears of joy, maybe new seeds of creativity can grow out of this watering of black women’s artistry.  We remember history to learn lessons for our present and future.  The silencing of black women’s histories in hip-hop is not a new occurrence. We need only revisit the musical histories of jazz and rock-and-roll to know that, as African American originators of such music, our cultures are easily stolen, appropriated, and repackaged in new forms and new cultures – even those cultures that remain hostile to black aesthetics and musical styles. Such cultural theft is enabled through systemic inequalities.

And yet, our culture survives because our creative impulses thrive. At the moment a cultural thief like “King of Jazz” Paul Whiteman tried to take over jazz, the musical genius of Louis Armstrong and Duke Ellington took the music to the next level. And when Michael Jackson lost out on Grammy awards for his often-viewed as superior album Off the Wall, he took his rage back to the studio and gave us Thriller, determined that his greatness would never be underestimated again.

Of course, black men do have the privilege of maleness to afford them a voice, something that black women – from blues singers Bessie Smith (who will be revived later in April by the likes of hip-hop legend Queen Latifah on HBO) to the black women soul singers and rappers of today – don’t always have, twice marginalized by race and gender.  We have the capabilities to take our music to the next level. But the question always remains: Will anyone be listening?

For the moment, Missy Elliott can be grateful that her music is being rediscovered by a new generation of listeners. Maybe then, others will realize the injustice of legitimate headliners being reduced to mere supporting roles.