Today’s guest post comes from Phillip Luke Sinitiere, currently a professor of history at the College of Biblical Studies, a multiethnic school located in Houston’s culturally rich Mahatma Gandhi District. A scholar of American religious history and African American Studies, his latest publication is a book chapter titled “Leadership for Democracy and Peace: W. E. B. Du Bois’s Legacy as a Pan-African Intellectual,” in Leadership in Colonial Africa: Disruption of Traditional Frameworks and Patterns, ed. Baba J. Jallow (Palgrave, 2014). In the fall of 2015, NYU Press will publish his next book, Salvation with a Smile: Joel Osteen, Lakewood Church, and American Christianity. Currently, he is at work on several projects related to W. E. B. Du Bois’s late-career intellectual and political work. 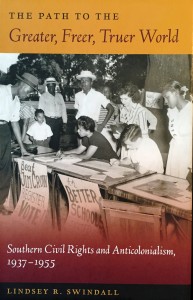 In today’s post he interviews Lindsey R. Swindall about her new book on global civil rights, The Path to the Greater, Freer, Truer World: Southern Civil Rights and Anticolonialism, 1937–1955 (Florida, 2014). Dr. Swindall earned her doctorate in Afro-American Studies from the University of Massachusetts, Amherst and is currently Teaching Assistant Professor in the College of Arts and Letters at Stevens Institute of Technology in Hoboken, NJ. Her other books include The Politics of Paul Robeson’s Othello and Paul Robeson: A Life of Activism and Art. She has also co-edited a collection on food history in the United States titled American Appetites: A Documentary History.

Phillip Luke Sinitiere (PS): Let’s begin with the short title—“The path to the greater, freer, truer world.” From where does this title come, and how does it gesture towards the book’s argument?

Lindsey R. Swindall (LRS): “The Path to the Greater, Freer, Truer World” comes from W.E.B. Du Bois’ speech at the 1946 Southern Negro Youth Congress meeting in Columbia, SC. This year, 1946, was such an important moment for left-wing groups like SNYC and the Council on African Affairs. Fascism had been defeated in WWII and organizations like these were going full-steam ahead toward implementing the promises of the Atlantic Charter and the idea of a Double Victory. The repression of the Cold War, which would ultimately devastate many groups on the left, had not yet been fully manifested. The hope of defeating all forms of fascism, including colonialism in Africa and segregation and disfranchisement in the US, was being pursued vigorously and seemed, for a moment, to be possible. In his speech, Du Bois summarized the past oppression of people of African descent throughout the diaspora and situated the US South as a “gateway” through which a new history could be born. Through their activism, the young people of SNYC could create a path to a world free of colonialism and discrimination by defeating injustice in the South. It was a bold vision born of a heady moment coming out of the war, and, sadly, it was one that would be obstructed by the antiradicalism of the Cold War.

PLS: Your book illuminatingly covers the Southern Negro Youth Congress and the Council on African Affairs, two very important organizations in US history but very much understudied. What drew you to these particular organizations, and why are they important?

LRS: I was introduced to these groups initially through my study of the life of Paul Robeson for my first two books on his artistic career and political activism. Once I learned about these organizations, I was hooked and wanted to know more. It seemed surprising that so little scholarship delved into their work which had pioneered vital pathways for the more familiar civil rights campaigns of the late 1950s and 1960s. They are important because they illustrate the idea that civil rights struggles were maintained throughout the twentieth century forming a kind of bridge between the founding of the NAACP in the teens and the Garvey movement of the twenties to the civil rights movement of the ‘50s and ‘60s. SNYC and the Council on African Affairs also demonstrate a strong international component to civil rights organizing that was obfuscated during the anticommunist hysteria of the middle and late 1950s. However, leaders like Martin Luther King, Jr. and Stokely Carmichael articulated a more global critique of discrimination in the US by the late ‘60s that brought them full circle back to the internationalist arguments that were made by SNYC and the council a generation earlier.

PLS: Historiographically, your book adds to the scholarship on the long civil rights movement and the globalization of African American history. Can you discuss these interventions?

LRS: The long movement is an idea that has been parsed by scholars in recent years to show that the civil rights revolution of the late 1950s through the black power era of the early 1970s had not exploded solely as a result of the ferment of WWII and the Brown decision of 1954. Rather, the long movement thesis demonstrates a sustained struggle for civil rights throughout the century. While the mass protests from 1955 to the passage of the Voting Rights Act in 1965 were exceptional, there had been important precedents in organizing and political theorizing during the depression and the war. Similarly, the globalization of African American history steps back to take a broad look at the experiences of people of African descent in the US by placing them within the context of the Atlantic world including the Caribbean, South America, Africa and Europe. An international approach has long been vital to the African American freedom struggle going back to the abolitionist movement. SNYC, for instance, saw itself as a direct descendent of Frederick Douglass who had travelled to Great Britain to advocate for the dissolution of slavery in the US. Global allies have always been vital to the black freedom struggle and the connections between people of African descent who shared similar experiences of oppression through colonialism, segregation and apartheid offered a sense of kinship and illuminated the structures of white supremacy wherever they existed. As articulated in the work of Pan-Africanists like Du Bois and Alphaeus Hunton, fighting against segregation and lynching in the US was incomplete without also condemning apartheid and colonialism. They were branches of the same insidious tree.

PLS: In terms of archival research and documentary materials, you make great use of Freedom newspaper and Freedomways journal. In the scope of how you interpret these important sources, can you address the importance of print culture in African American history, particularly for black radical cultural and intellectual history?

LRS: The heyday of African American periodicals was in the early twentieth century. After the Civil Rights Act of 1964 and the Voting Rights Act of 1965, more national newspapers began including news concerning African Americans because the mainstream of American culture was slowly becoming more inclusive. The readership for African American periodicals began to decline at that point. However, in the early twentieth century when segregation reigned there was little coverage of African American issues in national periodicals and black newspapers and periodicals were extremely important. They not only conveyed news and current issues but they offered an alternate vision that did not denigrate black culture. In this way, they helped unify the community at a time of sharp repression. Newspapers like the Chicago Defender and the Baltimore Afro-American had a broad readership across the country. Civil rights organizations used print media to rally members and speak to issues that impacted black Americans. The NAACP’s Crisis magazine, especially when Du Bois was editor, is a classic example of black journalism at its most influential. Newspapers and periodicals like Freedom and Freedomways came toward the end of the pinnacle of black journalism in the 1950s and 60s. They offered an important critique of mainstream perspectives, particularly during the red scare that followed WWII. They reported stories about domestic racial injustice that were often overlooked, rigorously critiqued discrimination as well as anticommunism in the US, and consistently drew important parallels between freedom struggles in the US with those going on around the world. In that way, they represent a unique and significant contribution to the public discourse.

PLS: What are you working on now? What projects are forthcoming?

LRS: Right now, I am switching gears slightly to examine race within the context of the burgeoning field of Food Studies. I recently finished an article on Michelle Obama’s food activism that will come out in a collection published by the University of Arkansas press later in the year. While working on that article, it seemed clear that this was a rich area of exploration so I am now at work on a book about the Obamas and American food culture.