“Depending on the ‘truth’ of the alternate versions, Liberia’s founding may be seen as a white kindness or as a black protest.” This quote could describe a history of the American Colonization Society in Liberia, West Africa. Instead it describes the contested memories surrounding the history of a rural Black community in Pickens and Greenville–both Appalachian counties in the Oolenoy River Valley of upstate South Carolina. In Liberia, South Carolina: An African American Appalachian Community, anthropologist John M. Coggeshall traces the history of Liberia from its founding by freed Black families during the period of Reconstruction to the present day. He tells the story primarily through the life of Katie Owens, a formerly enslaved woman, and Mable Owens Clarke, her great granddaughter, Liberia resident, and Coggeshall’s principal informant.

According to Black residents, Liberia was founded by freed people during Reconstruction who purchased the land from white landowners. In contrast, white residents insist that Liberia was founded by a group of generous white landowners who gave land to formerly enslaved people in good faith. It is this tension between Black and white memory that drives Coggeshall’s study. He offers histories of Black resistance as a countermemory to histories of white benevolence, arguing that the history of Liberia as told by Black residents constitutes an example of what James C. Scott termed “hidden transcripts.” Liberia as a hidden transcript is the first and most prominent theme of the book. Coggeshall asserts, “The dominant, public white memory of the region has been one of peaceful coexistence and minuscule black numbers, but the countermemory of local black residents has preserved a story of inequality and resistance for a much larger historical community” (6). Thus, “Conceiving of Liberia as a hidden transcript also explains why some whites have tried so hard to destroy it over the decades, and why blacks have struggled so hard to prevent that from happening” (24). To demonstrate this, Coggeshall begins the story with the 1967 burning of the Soapstone Baptist Church by the Ku Klux Klan and the Black community’s immediate response to rebuild it. 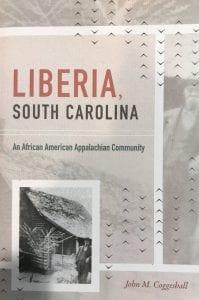 The first two chapters lay the theoretical and historiographical foundation for the study and elaborate on Coggeshall deployment of Scott’s theory. In Chapter One, Coggeshall describes himself as a postmodernist anthropologist acknowledging that multiple truths can coexist. To get at these truths, his study is purposely interdisciplinary, combining methods and theories from various fields, including anthropology, history, sociology, Black feminist theory, political science, and philosophy. He writes: “I hope the story of Liberia, rather than being an impersonal history of an ahistorical ethnography, is an ‘ethnography through time,’ an oral history occupying a niche between both disciplines, connecting multidisciplinary theoretical ideas to local people and events and creating a story that is accessible to both academics and a general audience” (x). Coggeshall succeeds in combining methodologies and the first chapter offers a great tool for a methods course on oral history and historical research.

In Chapter Two, Coggeshall presents Liberia, South Carolina as an answer to requests for more studies on race relations in the region by Appalachian scholars. Here he relies heavily on the work of John C. Inscoe, Wilma A. Dunaway, and W. J. Megginson. The chapter is mainly a historiographical summary of Appalachian South Carolina before 1865.

Chapters Three through Seven shift to a discussion of the community in Liberia, beginning with the life of Katie Owens during slavery then moving chronologically through Reconstruction, Jim Crow, desegregation, and finally to the present day through the lives of her “relatives, her friends, her neighbors, and her descendants” (209). Coggeshall explores kinship ties, Black rural life, the social and religious life of the community through Soapstone Baptist Church, employment, education, and race relations. Chapter Six is especially important as it recounts the 1967 Ku Klux Klan fire that destroyed the Soapstone Baptist Church. While Coggeshall combines oral history with ethnography, he also uses the archive extensively. Primary sources include census records, newspapers, local histories, and private collections. Coggeshall is forthright in his critique of the materials even as he engages them, providing a substantial discussion on the challenges and biases of archival sources for students.

While most of the book offers evidence in support of Coggeshall’s hidden transcript argument, Chapter Eight turns to the symbolic meaning Liberia residents attach to land, the second major theme of the book. Here Coggeshall tries to uncover why Black Appalachians returned to ancestral lands after histories of racial terror, expulsion, and inequality. He offers a six-step analysis of how land becomes its own subject to Black residents in Liberia. He writes, “Readers still need to understand the symbolic process by which people and land become intertwined, both in Appalachia in general (it is assumed) and in Liberia in particular” (203). He identifies a “multilayered cultural process by which ordinary dirt and rock ultimately become another member of an extended family network linked through generations” (208). Coggeshall argues that “this explains the magnetic pull of the land to draw long-absent kin home, the justification of the life-endangering struggles to retain ownership, and the pain felt by those who, for whatever reasons, must surrender their family land to various types of injustice, development, or abandonment” (208). This is the most generative part of the book, offering a window into Black Appalachian understandings of land and an example of what Katherine McKittrick and Clyde Woods identify in Black Geographies and the Politics of Place. By seeking to uncover what McKittrick and Woods describe as “a black sense of place” among residents of Liberia, Coggeshall succeeds in “presenting communities that have struggled, resisted, and significantly contributed to the production of space” in Appalachia.

Liberia, South Carolina ultimately adds to a growing body of literature on Black Appalachia that refutes the pervasive myth of the region as wholly white. Coggeshall asserts that the book, “Helps confirm the presence of otherwise ‘invisible’ blacks in the southern Appalachian region” (ix). He also connects the history of Liberia to broader discussions of power. He writes, “Moving beyond the hidden transcripts of life under slavery, Liberia’s story expands the application of Foucault’s concepts of power and resistance to examine personal stories of the hidden transcripts in African American life under Reconstruction, Jim Crow laws, and the dawning of the civil rights movements” (24). Ultimately Coggeshall concludes that, “The story of Liberia transcends Pickens County and even South Carolina, becoming not only a case study of an Appalachian African American community but also an opportunity to apply an array of theoretical perspectives to that case study” (23).

Although Coggeshall identifies himself as a postmodern anthropologist, he does not engage his positionality and how it might affect the process of recording an ethnography. There are a few times when this would have warranted discussion, especially after claims that Liberia, South Carolina somehow adds more “dignity and honor” to Black residents. Coggeshall writes, “The story of Liberia is an anthropologically grounded means by which another ‘people without history’ (borrowing Eric Wolf’s phrase) may enter the historical record and thus gain dignity and honor to their lives” (24). The implication here is that hidden transcripts are somehow illegitimate and that marginalized communities are devoid of certain qualities until their histories are written into the historical record. This seems to be the opposite of what the project seeks to do, but the message is nevertheless reinforced by such an assertion. Here Coggeshall leans too heavily into the idea of the anthropologist (or any outside scholar) as the one who “gives voice” to the community instead of acknowledging that the community had continued to share these histories through five generations, but their voices had been marginalized or downright ignored by scholars.

This is a minor critique of a book that will become a foundational text for scholars planning to teach Black Appalachian history and should also become a critical resource for scholars researching rural Black communities and collecting oral histories. Proceeds from the sale of Liberia, South Carolina go back to the community. Coggeshall notes, “A written agreement between Mable Clarke and myself guarantees that all royalties from the sale of this book will be returned to the Liberia community to help in historical preservation, restoration, and interpretation” (xii).  It is clear that John M. Coggeshall values the perspectives of Black Appalachians on the past and the viability of Black communities in the present and future.

Jillean McCommons is a doctoral candidate in the Department of History at the University of Kentucky. Her research explores the history of Black Power in Appalachia through the history of the Black Appalachian Commission. She will join the Carter G. Woodson Institute for African-American and African Studies at the University of Virginia as a predoctoral fellow from 2020-2022. Follow her on Twitter @jilleanmcc.