loading...
By Greg Childs February 15, 2016 Comments Off on Thinking About Grenada Through Iran 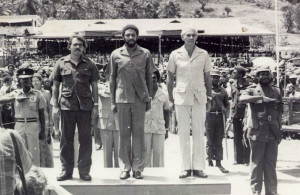 It has been more than three decades now since the Grenada revolution of 1979-1983, more than three decades since names like Eric Gairy, Maurice Bishop, Jacqueline Creft, and Bernard Coard punctured the atmosphere of global politics as one phase of the Cold War was ending and another was beginning. Yet for as quickly as the revolution came to signal the possibility that a worldwide socialist revolution was on the brink of emerging- with the Caribbean at the center of this new world-to-be- the revolution was all but forgotten outside of the Caribbean with just as much speed after the executions of Bishop and the trial of the Grenada 17.[1] After this denouement, it was as if the importance of Caribbean politics was once again reduced to Cuba and Nicaragua for many observers and scholars. Everything else was measured by how close or far it fell from these two country’s revolutionary history. US based professors of Latin American and Caribbean studies would proudly retell narratives of how they became inspired to study the region after seeing images of the Cuban Revolution or after following the rise to power of the Sandinistas. Or as one eminent historian of Brazil once put it when speaking about the study of Latin America by US historians, “we’re all the god-Children of Fidel.”[2]

Of course, there is a bit of hyperbole in such a statement, but in many ways there is also a strong bit of truth in it. While the Cuban Revolution is no longer the only example of revolutionary politics from the Caribbean that is accorded a place in World History textbooks (the Haitian Revolution now certainly shares such space), for all intents and purposes the ways that many of us have thought about and written about revolution in Latin America and the Caribbean are directly related to the impact that the Cuban Revolution has had on framing and shaping leftist expectations and political desires in the Americas over the past fifty years. If for the longest time we could not invoke the Haitian Revolution without immediately having to hear questions about whether or not it was just derivative of, inspired by, or measurable to the French Revolution, at the same time we have also been led to measure many revolutionary movements in Latin America and the Caribbean as failures in part due to the long shadow that the Cuban Revolution and how it seemed to be imperviousness to repression or overthrow from outside forces.

Thus Cuba not only serves as the test case for what winning a revolution looks like, but also for what a revolutionary government staying in power against overwhelming odds looks like. Following from this, it is difficult for scholars of revolutions or rebellions in other parts of the Caribbean to not think about or invoke Cuba when writing about their cases. From C.L.R. James appendix from “Toussaint L’Ouverture to Fidel Castro” in the 1963 reprint of The Black Jacobins, to Brian Meeks’s 1993 book Caribbean Revolutions and Revolutionary Theory: As Assessment of Cuba, Nicaragua, and Grenada, a rich heritage of thinking about black and brown revolutions in relation to Cuba exist in the landscape of Caribbean studies. And while this work continues to yield some important insights about the interconnections between Caribbean historiographies that are often divided by language, what would happen if we considered other models of thinking about revolutions in the Caribbean comparatively or transnationally?

The impetus for this last question has been with me for several months now, after I entered into a conversation with a colleague who is a specialist of revolutions in Middle Eastern history. It was admittedly her interest in the connections between Middle Eastern and Latin American history that got my curiosity piqued. To make a long conversation short, this colleague was interested in knowing why- given what we know about Middle Eastern migration to Latin America and vice-versa- there had never been a more sustained conversation between historians working on revolutions in Latin America and the Caribbean and historians working on revolutions in the Middle East. I admittedly had no direct answer for this question. Nor did she. But it was a question that we both thought was worth thinking about more, so we promised each other that we would think about it some more.

So there we were, prodding each other along with a series of questions that drew us deeper into each other’s intellectual world. Of course it was all exciting.  However, it didn’t escape our attention that we ended that second conversation having still not pointed out to one another a single piece of evidence that individuals involved in these revolutions were in contact with or following the developments of one another. Other than fantasies we held in our heads, there was nothing concrete to suggest that these revolutions should be studied together. Of course more than one scholar has compared the revolution in Iran with the revolution in Grenadian, with perhaps the most notable recent example being John Foran’s Taking Power: On the Origins of Third World Revolutions. Yet as the title of that work indicates, what is being compared is not how revolutionaries communicated with or about one another, but rather the ways in which revolutions in any part of the “Third World” come about. Furthermore, as this same colleague reminded me, the difficulty that we faced also stemmed from the fact of where we are located in terms of scholarly disciplines. Historians do not, for the most part, tend to think comparatively or even transnationally about revolutions. Instead, historians often consider revolutions to be distinct and separate events that are rooted first in their national or imperial histories, and secondly in their regional context. Stretching beyond boundaries of region, nation, or empire to theorize about revolutions is thus a task left to sociologists and political scientists.[3] 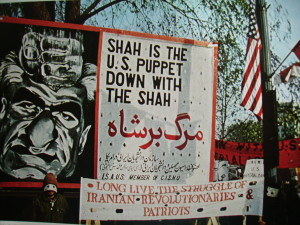 Several days, ago, however, the conversation was resumed by a discovery that my colleague had made. Having had our previous conversations on her mind, she decided to ask an activist she knew who lived through the Iranian Revolution if the Grenada Revolution was ever discussed among people in Iran during the revolution. The answer she received was a resounding “yes.” Activists and revolutionaries not only spoke casually about Grenada, her informant reported, but actually closely followed news about what was happening in that Caribbean revolution. The reasons for this close attention to Grenada in Iran were allegedly two-fold: on the one hand some Iranians felt a sense of revolutionary solidarity with the New Jewel Movement and the politics that were unfolding in Grenada between 1979-1983; on the other hand, some Iranians followed the Grenada Revolution as a way of trying to figure out how the United States operated against radical revolution. Grenada in other words represented both an opportunity to cheer and champion revolution and an opportunity to study and learn about counterinsurgency in real time.

So I now have more questions than anything. I am not even sure how to begin asking some of these questions. All I know is that it appears that the reach of the Grenadian Revolution can be followed into avenues of research that we have not begun to tap yet, avenues that do not begin or end with Cuba. Again, this is not a call for scholars to stop thinking about pan-Caribbean politics or for scholars to eschew the fact that many leftists revolutionaries from Grenada to Nicaragua to Venezuela have established direct contact with Cuba in the wake of a victorious revolutions. Clearly, however, there is also other exciting research to be done, research that may help us not only re-center radical politics in the Caribbean during the twentieth century but that may also help us significantly reframe the history of the Middle East’s encounters with the “West.”