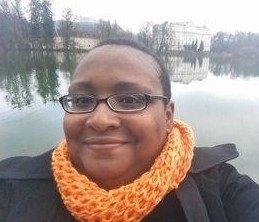 This is a guest post by Le’Trice Donaldson, a historian who specializes in 19th and 20th century African American military history and Women’s and Gender history. She has taught U.S Military and Naval history as well as courses in United States History, the African Diaspora, World History and Medieval European History. She completed a PhD in History at the University of Memphis where she wrote a dissertation entitled “A legacy all their own: African American soldiers fight for citizenship, race, and manhood, 1870-1920.” Dr. Donaldson currently teaches in the Department of History and Philosophy at York College of the City University of New York (CUNY). In this guest post, she offers a review of Carol Lynn McKibbon’s recent book Racial Beachhead: Diversity and Democracy in A Military Town. 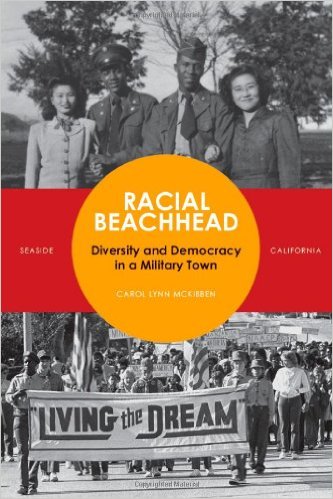 Historians over the past few years have begun to expand the historiography of Urban Studies to focus on race relations in military towns in Post-World War II America. Catherine Lutz in her book Homefront and Andrew H. Myers’ Black, White and Olive Drab each focus on the specifics of race relations in a military town after WWII. Carol Lynn McKibbon, the public historian for the city of Seaside, California has set out to go a step further than Lutz and Myers with her book Racial Beachhead: Diversity and Democracy in a Military Town. McKibbon’s goal in Racial Beachhead is to demonstrate how a town that is centered around a military installation found a way to peacefully integrate while the rest of the country reacted violently to racial integration. She asserts, “The story of Seaside, California is entwined in the history of how World War II and developments in the postwar decades transformed much of California and the West” (p. 2). The author situates Seaside into the larger economic and demographic context of the California coast. The northern California coast was more than just a tourist destination according to McKibbon; it became a testing ground for racial politics in the military and revealed how racial integration on military bases, and in the communities that surround them, would play out in the years after World War II. Ultimately, McKibbon argues that integration in Seaside was a success because of the presence of Fort Ord and the role of the federal government.

The story of Seaside, California becoming a minority-majority military town begins in 1911 when the city’s founder Dr. John L.D. Roberts convinced President Theodore Roosevelt to place Fort Ord in the county of Monterey. The early history of Seaside as discussed in chapter one delves into how this picturesque community of white middle class families rapidly became a multicultural subdivision of a predominately white county after the arrival of Fort Ord. One of the Buffalo Soldier regiments, the Ninth Cavalry, ended up being stationed at Ft. Ord and once they arrived so did the caravan of African Americans that followed them. The diversity of Seaside in the first part of the twentieth century was similar to the expansion of the black population of Salt Lake City, Utah at the end of the nineteenth century, when two Buffalo Soldier regiments were stationed at Ft. Douglass. The black community of Seaside rapidly expanded with the arrival of black soldiers. However, one of the fascinating aspects of McKibbon’s study is the discussion of how African Americans, Whites, Mexican-Americans, Asians, and other ethnic and racial groups all interacted and joined together in helping to create a multicultural town that built successful political coalitions not based solely on race or ethnicity.

In chapters three and four, the author delves into how the residents of Seaside respond and react to becoming a multiethnic military community. There were major post war developments in Seaside that helped to establish this multicultural coalition and made this community unique compared to the rest of Northern California. McKibbon makes excellent use of the local archives, local newspapers, oral interviews, and census records to help reconstruct and trace the evolution of Seaside. The white community of Monterey county actively participated in the housing discrimination that was prevalent during the 1940s, 50s, and 60s. Almost all minority groups that were deemed non-white who attempted to live in Monterey County were only shown homes in Seaside. This is one of the reasons, according to the author, that this community was able to peacefully integrate–unlike cities such as San Francisco or San Diego, which also had military bases but more resistance to integration.

Once President Harry Truman issued Executive Order 9981 stating that, “there shall be equality of treatment and opportunity in the armed services without regard to race, color, religion, or national origin,” Ft. Ord–one of the “country’s largest and most vital training centers in the United States”–was the first to undergo complete integration (pp. 53-58).  It is because of the military’s policy of integration in the 1940s that enables the diverse community of Seaside to peacefully integrate. After the city was incorporated in 1954, there were a series of political elections that resulted in the election of the first African American city councilman in 1956. The multiethnic coalition that helped to get Monroe Jones, the first black city councilman, elected included leaders from the black, white, Japanese, and Filipino community. The strongest sections of this study is when the author discusses the intricacies of Seaside’s local politics and explains how the people of this community were truly ahead of their time when dealing with racial politics.

The final two chapters of the book examine the decades of decline for Seaside the 1980s and 1990s. The United States was in a period of crisis, both economically and socially. The rise of crack cocaine affected nearly every community in America and Seaside did not escape its wrath. The rise of violent crimes in Seaside did not illicit the same kind of reactions to the crack epidemic in cities such as Chicago or Los Angeles. The community of Seaside did not isolate crack users and criminals in the black community, like they did in Chicago or Los Angeles. Instead, they focused on utilizing their multiethnic coalitions to build community watch groups to help combat the violent crack epidemic. While this community combated one issue they were hit with the loss of the one thing that helped keep this community thriving–the closure of Ft. Ord. This is a crucial part of the book. However, McKibbon’s discussions about the economic impact on Seaside after the base closes could have been more nuanced and less centered on the middle class community.

At times, the author overemphasizes the perspectives of black middle class residents, leaving the reader with questions about how the other half lived in Seaside. Moreover, there is a lack of discussion of the Black Panther Party for Self Defense, which was founded not far from Seaside–in Oakland, CA. The author mentions that Mel Mason, an active member of the Black Panther Party in Oakland, was elected to the Seaside city council in 1980 but offers few details on the matter. Despite these minor concerns, this book provides a much-needed analysis of race relations in a military town and sheds light on how the loss of large military and federal installations impact minority-majority communities. Racial Beachhead is a welcome addition to the growing literature in Urban Studies and provides a rare window into a world often ignored by scholars.

Comments on “Book Review-Racial Beachhead: Diversity and Democracy in A Military Town”