loading...
By Francisco Herrera May 5, 2017 Comments Off on Theorizing Race in the Americas: An Interview with Juliet Hooker

In today’s post, Francisco Herrera, an MA student in Latin American Studies at the University of Texas at Austin, interviews Juliet Hooker about her new book Theorizing Race in the Americas: Douglass, Sarmiento, Du Bois, and Vasconcelos, which will be released on May 1 by Oxford University Press. Juliet Hooker is Associate Professor of Government and African and African Diaspora Studies at the University of Texas at Austin. She is a political theorist specializing in comparative political theory, critical race theory, and multiculturalism, and has also published widely on Afro-descendant and indigenous politics and multicultural rights in Latin America. She is the author of Race and the Politics of Solidarity (Oxford University Press, 2009). Her other recent publications include “Black Lives Matter and the Paradoxes of U.S. Black Politics: From Democratic Sacrifice to Democratic Repair,” Political Theory (2016). In 2014–2015 professor Hooker served as co-Chair of the American Political Science Association’s Presidential Task Force on Racial and Social Class Inequalities in the Americas, and as Associate Director of the Teresa Lozano Long Institute of Latin American Studies at UT-Austin from 2009–2014. She has received awards from various institutions including the National Endowment for the Humanities, and held visiting fellowships at the CUNY Graduate Center and the Du Bois Institute at Harvard University. Follow her on Twitter @creoleprof. 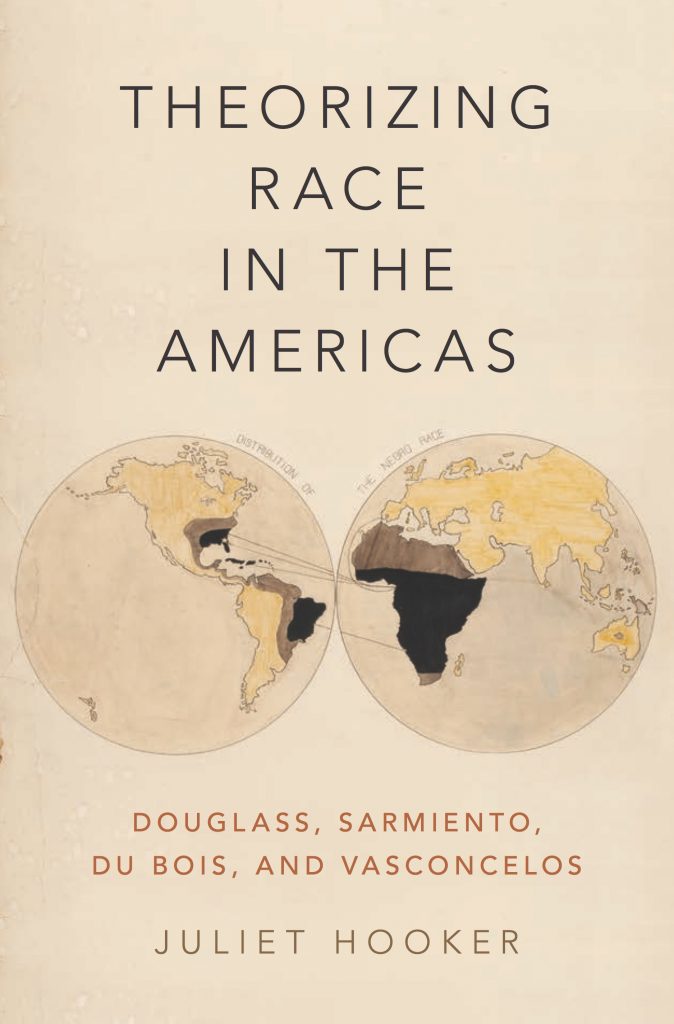 Francisco Herrera: How did this project come about? What questions led you to ask how race was theorized in a hemispheric way?

Juliet Hooker: The impetus for the book came from two initial realizations. One was that there was this narrative about Latino racial exceptionalism that had become central to the way in which people talked about how Latinos are transforming conversations about race and racial identity in the United States. It’s this idea that Latinos don’t fit US racial categories because they come with these Latin American ideas about race that are so entirely different from those in the US because in Latin America mixture is emphasized, which is antithetical to US binary notions of race. One thing that struck me was this construction of the US and Latin America as apparently having completely distinct ideas about race that have never been in contact or weren’t in conversation with each other, which is historically wrong.

The other impetus for the book was that there are times in which African-American thinkers in particular are portrayed as having simply reflected the dominant US binary notions of race, without paying attention to these thinkers’ connections to Latin America and to black populations in the region. This seemed to me to be a simplistic reading of how African-American thinkers thought about race, which located them strictly in a US context, when they were actually much more diasporic than was revealed by this particular understanding of the contrast between US and Latin American racial systems.

Herrera: You’ve made the point that you could have chosen other thinkers, such as Ida B. Wells, than the ones you focus on in the book. Tell us more about how you chose these four figures.

Hooker: The question of selection is unavoidable with this kind of book. It’s very common in political theory to do this kind of mapping of intellectual history by focusing on specific thinkers. No project that tries to map African-American or Latin American political thought is ever going to map the whole tradition, however, so that’s a drawback of the approach of focusing on specific thinkers.

The choice of the four thinkers was based on a number of different criteria. First, I wanted thinkers who were contemporaries and who were major players in their respective canons. There’s no doubt that Douglass and Du Bois are huge figures within African-American political thought and there’s no question that Sarmiento and Vasconcelos are equally prominent within Latin American political thought. So part of it was choosing thinkers who were prominent and also put forward very influential notions about race that shaped subsequent debates in really important ways in their respective regions. I think that’s true of all four of them: people are still wrestling with Vasconcelos’s arguments about mestizaje, and they’re still wrestling with Du Bois’s notion of racial identity. These four thinkers made sense because their ideas have lived on in a really important way. If I had chosen a different set of figures, of course, I would have had different insights and so I welcome other people taking up that challenge and doing more of this kind of hemispheric analysis.

Herrera: One central aspect of your methodology is that you depart from comparison and instead focus on this concept of juxtaposition. Why was this such an important distinction to make?

Hooker: When I began the project, I was thinking about how these comparisons between the US and Latin America are made, and what kind of work those comparisons are doing. That led me to realize that comparison actually functions as a trope—it often does not really function as a way of putting two disparate objects in conversation or in dialogue. Rather, thinkers are looking at the other America with a romanticized or distorted view that can become useful for them as they make interventions into debates about race in their particular contexts. Comparison thus creates the very differences that it purports to be showing. Comparison also has an impulse towards ranking—in this case, for example, which region has a better approach to race.

To try to get away from this, I turn to the concept of juxtaposition, which is basically reading two traditions or thinkers simultaneously without assuming that they’re either similar or distinct. The easiest way to visualize this is by turning to the idea of counterpoint in dance. Two unrelated gestures or movements are occurring independently of each other side by side, and seeing them together on the stage changes how you see them both and is different than if you were seeing them sequentially or one at a time. The idea of juxtaposition draws on this by asking how we can analyze thinkers and traditions simultaneously without making a priori assumptions about the differences or similarities between them.

Herrera: Each chapter makes clear links between the ideas developed by the thinker you discuss and current political projects being developed throughout the American hemisphere. What unique insights about race did this project yield by reframing the context in which we understand these thinkers’ ideas?

Hooker: One of the key insights that emerges from the book is in Part II on Du Bois and Vasconcelos and their distinction between what a post-racist and a post-racial future might be. In the 1920s and 1930s they’re writing these texts which are imagining what a future beyond global white supremacy might look like. They turn to these utopian fantasies of racial mixture as vehicles for imagining those political possibilities. While, as I say in the book, both of those visions are not unproblematic, what was interesting to me is that neither Du Bois nor Vasconcelos equates a post-racist future (in which we overcome racial hierarchy) with a post-racial future (in which transcending race is equated with overcoming racism). We currently think about what a future beyond racism looks like by thinking that since race has been constructed since the discovery of the New World with all these tragic consequences, the way to not be racist is to move beyond race. For Du Bois and Vasconcelos this is not a viable alternative because racism persists. One of the key insights that emerges from the book is that we need to be creative and think more expansively about what it means to imagine a post-racist future and that gesturing to the post-racial is a lazy answer.

Hooker: I would say that one of the key insights that emerges from this book is that we retrospectively read thinkers as much more circumscribed by national frames than they really are, and this also means we read social and political movements as being that way. One of the things I think is striking after having written this book is how much connection there was in the 19th century between the two Americas and how much each of these thinkers viewed struggles for racial justice diasporically or transnationally at a time when communication was much less immediate and travel was so much more difficult. One way this helps us think about the current moment is in how we envision what movements in the US and Latin America can learn from each other. For example, instead of framing hemispheric accounts of movements against police violence by asking how Black Lives Matter has resonated in Latin America, we should think instead about what Black Lives Matter can learn from Latin America, where there have already been longstanding movements against police violence in countries such as Brazil that predate the emergence of Black Lives Matter. So when we think hemispherically, we shouldn’t assume that the only direction in which ideas and tactics travel is north to south, but rather people in the Global North are also learning from people in the Global South. Transnational linkages between movements have always existed in the Americas. Ideas and people have always traveled hemispherically.

Francisco Herrera is a graduate student in the Teresa Lozano Long Institute of Latin American Studies at the University of Texas at Austin. His research interests include social movements; collective action; Afro-descendant and idigenous politics; development; nation-building; citizenship; and critical theory. Follow him on Twitter @NicaThinker.