“The demands made by The Movement for Black Lives makes clear that what has been occurring of late is, without question, an extension of earlier forms of black protest” 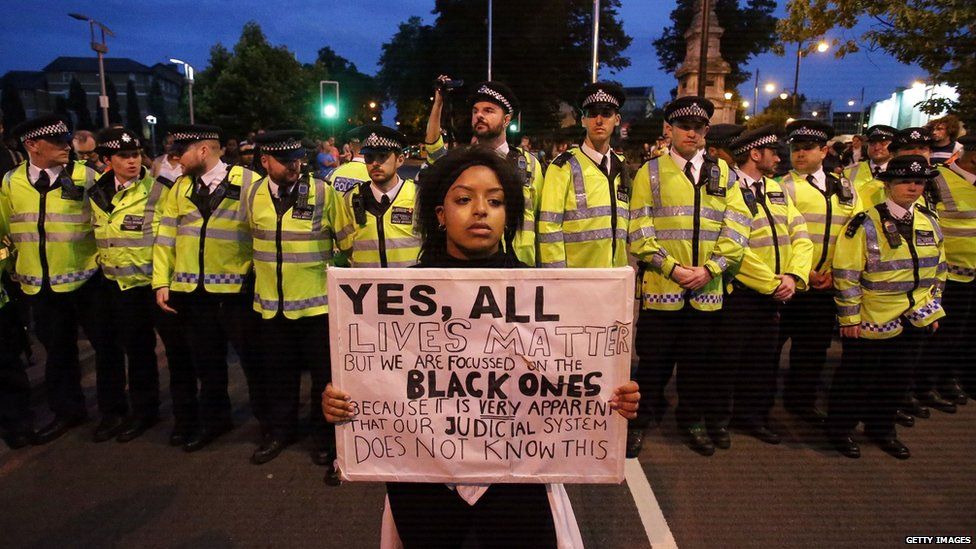 African American activists have a long and rich tradition of publishing broadsides, platforms, and position statements, from David Walker’s Appeal…to the Coloured Citizens of the World, printed in 1829, to the Black Panther Party for Self Defense’s Ten Point Program, written almost a century and a half later. Each, in their own way, for their own time, identified the black freedom struggle’s chief obstacles, articulated its central aims, and advocated a particular tactical approach.

For David Walker, the freeborn, radical abolitionist, the principle problem was slavery, the singular aim was abolition, and the only viable approach was taking up arms against slaveholders. For BPP founders Huey Newton and Bobby Seale, the main issue was capitalism, the primary goal was ending the exploitation of the black community by capitalists, and the only way to bring about change was to use social programs to help the community survive until the eventual, if not inevitable, revolution.

The Platform issued by The Movement for Black Lives fits squarely in this tradition, offering a thoughtful and considered analysis of the contemporary African American freedom struggle. Indeed, its opening statement reflects the very best of black broadsides, platforms, and position statements. It declares emphatically that the overarching problem that African Americans face is “sustained and increasingly visible violence” against black communities “in the U.S. and globally.” It argues forcefully for the liberation of all black people, including the most marginalized within black communities. It demands policy interventions to address the immediate needs and concerns of African Americans. And it calls for imagining a “fundamentally different world” in order to ensure lasting, long-term change.

The Platform’s opening statement also situates the Black Lives Matter Movement on the continuum of the black freedom struggle, identifying this most recent iteration of black protest as unapologetically black in purpose and focus, and driven by what Dr. Martin Luther King, Jr. called “the fierce urgency of now.”

In recent years, scholars have focused increasingly on connections between early 20th century African American protest and that of the civil rights and Black Power eras. But they have paid far less attention to links between contemporary black protest and earlier manifestations. The demands made by The Movement for Black Lives makes clear that what has been occurring of late is, without question, an extension of earlier forms of black protest.

Echoes of 1960s civil rights activism reverberate strongly in the Platform, especially in its opening statement. But the Platform’s six demands, and the detailed explanations of them, are more Malcolm than Martin. Indeed, the call to end the war on black people, for reparations, to invest-divest, for economic justice, for political power, and for community control, not only invoke the language of Black Power protest, but strongly reflect goals and objectives articulated by Black Power activists.

This may come as a surprise to some because popular narratives of the African American freedom struggle tend to treat Black Power as an aberration, as a dramatic break from a nonviolent protest tradition, rather than a return to traditional approaches to change and structural critiques rooted in Black Nationalism. Popular narratives assume that once Black Power stopped making national headlines that the ethos undergirding it, which had become so central to the organizing work of so many black activists, not only faded from existence but was replaced by an early Sixties nonviolent spirit.

But this never happened. The Black Power ethos remained and over the years became deeply embedded in many of the cultural and educational institutions of the black community. This had the effect of politicizing successive generations of young people. Indeed, Black Power protest left a legacy of structural analyses and community centered approaches to change that remains more easily accessible to today’s young people than that of many leading civil rights era organizations, such as the Southern Christian Leadership Conference.

The Movement for Black Lives’ platform, however, is no simple reiteration of demands issued by Black Power groups. Instead, it deepens, broadens, complicates, and refines that which others have agitated for in the past. The platform calls for reparations for racial discrimination, for example, but in the form of open and free access to public universities, colleges, and technical education programs for all, including and especially undocumented and incarcerated people.

The Platform does something else that warrants mentioning. In the best tradition of black protest, it offers a blueprint for implementing its demands. Indeed, it has set a new standard for articulating the goals and objectives of the African American freedom struggle, and as such should be, and will be, discussed and studied for years to come.