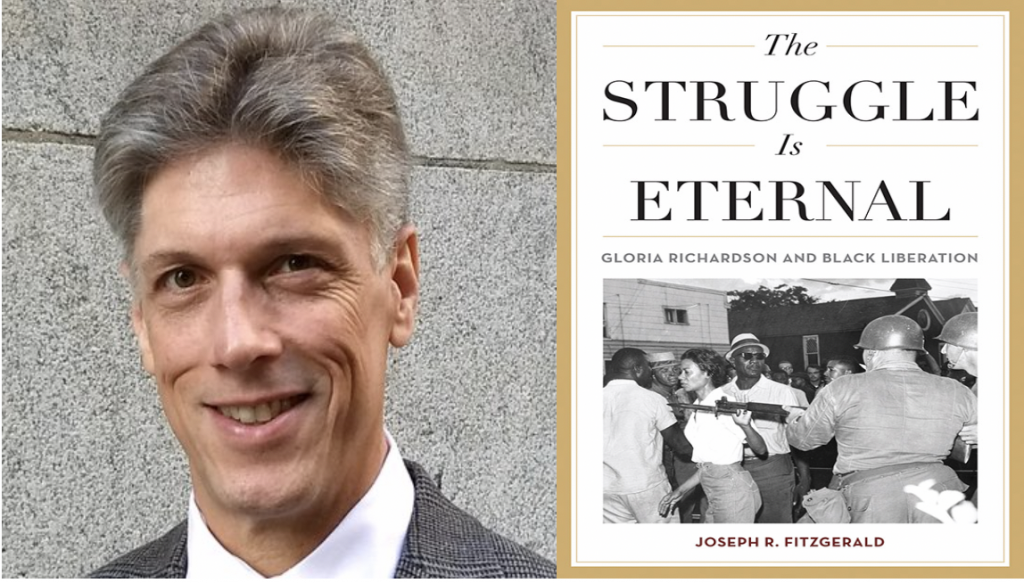 In today’s post, Ashley Farmer, Assistant Professor in the Departments of History and African Diaspora Studies at the University of Texas-Austin, interviews historian Joseph R. Fitzgerald about his new book The Struggle is Eternal: Gloria Richardson and Black Liberation (The University Press of Kentucky, 2018). Joseph R. Fitzgerald is Assistant Professor of History and Political Science at Cabrini University. Prior to attending college, Fitzgerald served three and one-half years on active duty in the United States Air Force, where he worked as a dental laboratory technician and achieved the rank of Sergeant. Fitzgerald earned an associate degree in liberal arts from Schenectady County Community College in New York, a bachelor’s in Black Studies from the State University of New York at New Paltz, a master’s degree in Twentieth Century African American History from Empire State College, and a doctorate in African American Studies and graduate certificate in Women’s Studies from Temple University. His academic specialties include critical race feminism and the Civil Rights and Black Power waves of the modern Black Liberation Movement, in addition to the modern Women’s Movement and the rise of the New Right. Follow him on Twitter @StrugIsEternal.

Ashley Farmer: The first part of the biography digs deeply into Richardson’s family roots and history. How does this perspective help shape readers’ understanding of her activist trajectory?

Joseph R. Fitzgerald: All of us are influenced by the people in our lives, and the spaces in which we live, work, and play. The same is true for Gloria Richardson. On both sides of her family, she descends from southern Black people who developed and maintained positive views of themselves as Black people. Through the generations, they passed down this positive race identity along with other important lessons, namely, obtaining an education and serving their Black communities. The latter became a family tradition that Richardson took to heart because she and her family lived well because Black people had patronized her family’s numerous businesses in Cambridge, which is on Maryland’s Eastern Shore. She saw all of her family members engage in some type of community service; her maternal grandfather was an elected city council member in Cambridge where he worked at improving the lives of the city’s Black residents, while her grandmother, parents, and uncles and aunts donated money, time, and resources to their neighbors in need. Richardson carried on this tradition through her human rights activism.

Farmer: Much of the book focuses on Cambridge, Maryland, where Richardson started her activist career. Were the racial politics and activism in Cambridge typical or unique among small U.S. cities?

Fitzgerald: A bit of both, at least with respect to the south. Just as other white communities had done throughout that region, white Cambridge residents created and maintained a racially segregated and unequal world where they privileged themselves over Black people in both public spaces and employment. Schools and libraries were segregated and the staff at the city’s hospital didn’t offer Black people the full range of care that white residents received. By the early 1950s there were some positive steps toward desegregation, namely the bus station’s waiting area, and the segregated county schools began holding integrated extracurricular events, but those were the extent of it. At the same time, Cambridge’s economy was based on agriculture (e.g., green beans and tomatoes) and seafood that were canned in local factories. There was also a small high-tech industry that was a part of the nation’s Cold War military industrial complex. So, Cambridge’s activists were up against local politicians who worked hand-in-glove with white business owners to manage this mixed economy, and who practiced racial preference for white workers, thus giving them access to the best paying jobs and career advancement, while relegating Black workers to seasonal unskilled laboring jobs on farms, and dead-end jobs in factories. The white community—which included its working-class members—maintained a united front to thwart Black residents’ attempts to shatter the racial status quo, and this was exactly how countless other white communities around the south operated at the time.

Politically, Maryland was different from most southern states because Black people actually exercised the right to vote. However, Cambridge’s white politicians had racially gerrymandered the Black community—which constituted about one-third of the city’s population—into one of the city’s five wards, effectively cutting down their electoral power. Despite this, the Black community had always exercised a relative degree of electoral power, which makes Cambridge an unusual case among local struggles of the modern civil rights movement. This power was on display when, to the frustration of white and Black moderates, most Black voters boycotted the referendum vote that white residents initiated to maintain racially segregated public accommodations. They did this because they were opposed to voting on their constitutional rights. 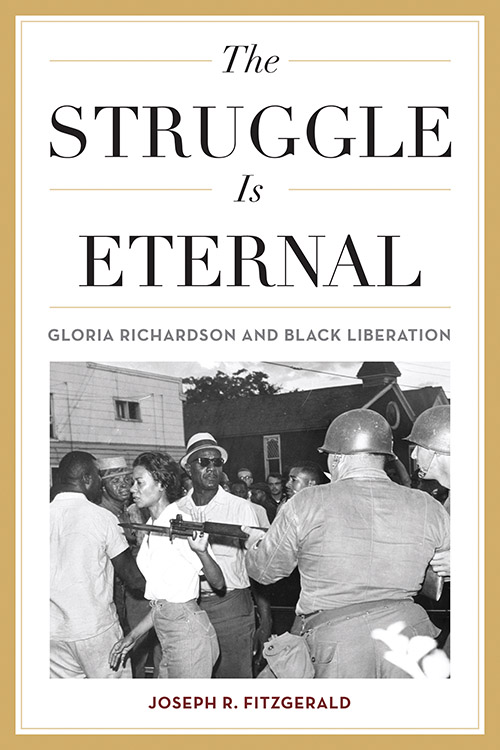 Farmer: Throughout the book, you frame Richardson as someone who continually defies categorization. In what ways does she complicate our understandings of activism, intellectualism, and gender roles?

Fitzgerald: I think the term “creative chaos” sums up perfectly Richardson’s nonconventional type of activism. She was always “thinking outside the box,” if you will, employing various tactics to work toward Black liberation. For example, Richardson used silence and misinformation, specifically during negotiations and communications with white politicos, to confuse them about the Cambridge Nonviolent Action Committee’s activities, and strategies. Of course, the referendum boycott was another nonconventional tactic that she promoted and used.

Richardson’s socioeconomic background makes her a statistical outlier among her Civil Rights and Black Power colleagues. She was from a very wealthy family who belonged to the network of socially and politically powerful Black families commonly referred to as “the Black elite.” Richardson empathized with the Black working class, the group that had always supported her family’s businesses, and she felt an obligation to use her knowledge, skills, and abilities to serve the Black community.

In terms of her intellectualism, I think there are three areas where we see that at work. First, Richardson’s Howard University education in sociology and her training in theater production (gained through her work in the Howard Players theater group) allowed her to accurately read group dynamics out in the streets and to manage them in ways that served the Cambridge Movement’s goals. Second, she possessed a type of political instinct that movement activists, and even some media reporters, commented was superior to most other activists they had observed.

The third factor is the “why” aspect of her activism. In my book, I explicitly identify, name, and map Richardson’s social, economic, and political philosophies to her vision of Black liberation, and how she worked to achieve it. I think it is important for scholars who research and write about Black people to be very, very clear about the philosophical basis to their actions. If we scholars don’t take this approach, we lose the chance to show how these people are much more than the sum of their actions, and we risk diminishing their agency.

Regarding gender, Richardson’s leadership of the Cambridge Movement propelled her to national stature that resulted in people seeing her on par with prominent Black male activists, such as Dr. Martin Luther King, Jr. and James Farmer. At the same time, Richardson was a gender iconoclast because she was willing to be confrontational with people no matter their race, class, or gender when she believed they stood in the way of Black liberation.

Farmer: Many who encountered Richardson do so through the iconic photo of her facing off against an armed National Guardsman. What do you hope readers take away from your deeper discussion of Richardson’s activism?

Fitzgerald: My hope is that readers see Richardson’s activism as a success story of human rights work that was made possible because she knew she didn’t “ha[ve] all the answers” to all the pressing issues Black people faced, but that she could and should work in consultation and consensus with her fellow activists so they could build a viable human rights movement in Cambridge. Additionally, she never set out to become a leader of the Cambridge Movement but ended up becoming one when she rose to the occasion. This, too, is a lesson to everyone: Our choices can take us on a path that we may never have considered, but it may be one that the freedom struggle needs us to travel. In other words, we can be like Gloria Richardson and that means we should be open to the myriad possibilities that come our way, and make sure we keep our egos in check, and we don’t make compromises on our ethics or people’s rights.

Farmer: The biography shows that Richardson worked with many organizers across the political spectrum. Who do you think influenced her the most ideologically?

Fitzgerald: Richardson never actually subscribed to any specific social, economic, or political ideology. However, her thinking about race was heavily influenced by the sociologist E. Franklin Frazier, who was one of her Howard University professors. He deconstructed, in a systematic way, how racism operated in American society and his macro analysis of white supremacy allowed Richardson to see how her own personal experiences with racism fit within the broader experience of being Black in America. This, in turn, made it possible for Richardson to have a much better grasp at the depth of racial problems that Black people were confronting in the 1960s, and that she needed to think about Black liberation in ways that would take Black people beyond their goal of desegregation to other areas of their lives, such as employment, housing, and healthcare.

Farmer: You note that Richardson only recently retired in 2012 at the age of 90! What do you think her long career can tell us about the longevity of Black freedom fighters and the Black liberation struggle?

Fitzgerald: It reminds me of the phrase that so many activists use when they speak at conferences and other events pertaining to their civil rights work: “I never left the movement.” Incidentally, Richardson feels that she had indeed left the movement, but as your question implies, she still engaged its “bread and butter” issues for another four decades, albeit in a different space and form when she became a civil servant. What this tells me is that she and her compatriots have a heartfelt commitment to doing the thankless work to free our nation from injustice and oppression. And as long as they are physically able to do so, they will continue to show up each day at work, and in their community organizations, to make Black liberation a reality.

Comments on “‘The Struggle is Eternal’: An Interview with Joseph R. Fitzgerald”