loading...
By Julian Chambliss October 14, 2017 Comments Off on The Soul of Black Comics: An Interview with John Jennings

This month, I had the opportunity to speak with John Jennings, Professor of Media and Cultural Studies and a Cooperating Faculty Member in the Department of Creative Writing at the University of California, Riverside. Jennings is a scholar and artist whose artistic work is deeply influenced by the African American cultural experience and explores intersectional narratives linked to identity. He illustrated Octavia Butler’s Kindred: A Graphic Novel Adaptation. He recently completed a stint as the Nasir Jones Hiphop Fellow at the Hutchins Center, Harvard University. While Jennings’ adaptation of Butler’s Kindred has generated excitement, his original creative work highlight a creative intervention designed to celebrate Black culture. Jennings is co-editor of The Blacker the Ink: Constructions of Black Identity in Comics and Sequential Art and co-founder/organizer of The Schomburg Center’s Black Comic Book Festival, co-founder and organizer of the Black Comix Arts Festival in San Francisco and the SOL-CON: The Brown and Black Comix Expo at the Ohio State University. I spoke with him about his latest graphic novel Blue Hand Mojo (Rosarium Publishing), an innovative publishing startup dedicated to bringing multicultural voices to the public. Follow Professor Jennings on Twitter @JIJennings.

Julian Chambliss: You have recently grabbed a lot of attention with your adaptation of The Kindred. How does Blue Hand Mojo offer a different creative experience for you?

John Jennings: The opportunity to do Kindred with my long-time collaborator and friend Damian Duffy has been a remarkable experience. Octavia Butler is one of the most important American writers to ever live. However, Blue Hand Mojo is totally my own creation from top to bottom. The experience of essentially collaborating with another writer is vastly different than controlling the entire narrative. With Mojo I could make format changes, rearrange story elements, and enhance the narrative as I worked on it. You don’t have the same range of freedom when you are doing such a beloved book as Kindred. 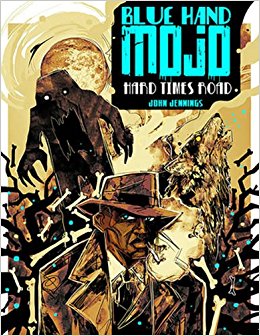 Jennings: “Half Dead” is the fictional first cousin of the legendary blues musician Robert Johnson. I wanted to take something from our cultural history that was already a piece of folklore and then push it even further. “Half Dead” represents the raw anger and pain that was the burden of Black men and women working under the weight of the Jim Crow South. His revenge on his white attackers and his subsequent curse to work for the Devil represent the fact that those experiences followed Black people with them during the various stages of the Great Migration. I wanted to explore what that does to a person but also use the supernatural as the lens through which to view the narrative implications.

Chambliss: Your story is steeped in the cultural legacy of the African American experience, but shows a depth and complexity around race, community, and identity. What were your goals in crafting this story?

Jennings: I am from Mississippi and I carry a lot of the weight of the racism in our country in my own personal experience. It’s a haunted existence sometimes. This is why I coined the term (with Stanford Carpenter) the “EthnoGothic.” It is dealing with very complex tensions around the Black experience in the United States and in particular the Black Southern experience. It’s also dealing with how trauma acts as a revenant of our continually contentious narratives around race, class, and history. Even as I answer these questions, protesters use their bodies to occlude a white woman’s painting of Emmett Till. Our past isn’t done with us. It’s not even the past.

Chambliss: You have been a consistent voice helping to create space where scholars and practitioners are in dialogue. Your work seems to model that process. How do you see this kind of creative intervention evolving in the future?

Jennings: I think that I can see my practice evolving into one of producer, editor, and facilitator. I have a knack for being able to find overlaps across disciplines and between scholars from various modes of discourse. My most important asset, however, isn’t a skill set at all; it’s a point of view that I fervently believe and constantly put into practice. I truly want us all to be successful. I truly believe that by working together we can achieve anything. So, I have dedicated my career and my energies to creating opportunities where many individuals have the potential to move forward and find agency in the experience. I think that if we can make collaboration the norm and not the exception, we would be totally amazed by what we can accomplish.

Chambliss: What is on the horizons for your creative work exploring the Black experience and Black identity? 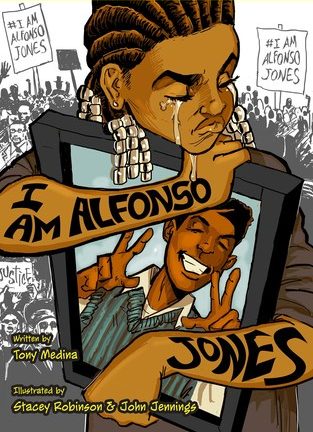 Jennings: I just finished up toning pages for a book with Tony Medina and Stacey Robinson called I AM ALFONSO JONES. It’s a black and white graphic novel from Lee and Low/Tu Books that deals with the death of bi-cultural teenage boy named Alfonso Jones. The entire story is told from the boy’s perspective as a ghost. The book deals with social justice, police brutality, and the Black Lives Matter Movement.

I just signed a contract with Rosarium Publishing to put out a 10 part maxi-series with Ayize Jama Everett called BOX OF BONES. The story follows a Black queer Southern woman who is doing her dissertation fieldwork around a mysterious artifact that punishes people who have wronged people of color throughout the African Diaspora. The scholar, little by little, realizes that the artifact is real and that her destiny is connected to it. It’s not for the squeamish. I use the elevator pitch of  “Afrocentric Hellraiser” to give the context in a quick sound bite. The terror begins this Fall.

Damian Duffy and I are currently finishing up BLACK COMIX RETURNS. It’s the follow up to our 2010 art book Black Comix: African-American Independent Comic, Art and Culture. This book, which was fully backed on kickstarter, will be a 12 x 12 in., hardcover, full-color art book with double the amount of independent Black comics creators inside. It should be coming your way in early Spring 2018. There are more things coming but I am not at liberty to talk about them just yet. Thanks so much for the opportunity to talk about this work.

Julian Chambliss is Professor of English at Michigan State University. His teaching and research focus on urban history and culture in the United States. He is the co-editor of Ages of Heroes, Eras of Men, which explores the changing depiction of superheroes from the comic books of the 1930s to the cinematic present. Follow him on Twitter @JulianChambliss.