loading...
By Denise Lynn December 14, 2018 Comments Off on The Rhetoric and Methods of the 1963 Mississippi Freedom Vote

After attempting to register Black voters, pushing school integration, and challenging segregation in transportation throughout the 1950s, activists in Mississippi found little success. The high-profile murders of Reverend George Lee, Emmett Till, and Mack Charles Parker proved that white Mississippians were willing to use violent resistance to maintain the racial status quo. According to historian William H. Lawson, 1963 was the year that things began to change. In May, Tougaloo Black and white college students and faculty sat-in at the Woolworth lunch counter in Jackson. Images of their abuse at the hands of local white teenagers circulated internationally. This image, as Lawson argues, served as a “mind-bomb” for its consumers.

While a lunch counter was a familiar site, the violence against the protestors made it strange. It was what rhetorical and communication scholars call an “image event.” The function of this and other image events in the Civil Rights movement drew attention, sympathy, and activists to the cause. The images out of Jackson served as a catalyst for events throughout the summer and fall in Mississippi that would lead to the Freedom Vote, also known as the Freedom Ballot.

William Lawson’s No Small Thing: The 1963 Freedom Vote explores the vote using a “rhetorical study of historical events,” which examines how rhetorical devices are used by people to persuade others to engage in social actions. In the case of the Freedom Vote, Lawson argues that Black Mississippians, long denied their rights as citizens, acted as citizens when they participated in the Freedom Vote. This was an important rhetorical strategy that took the familiar image event of voting, and demonstrated Black citizens’ desires to exercise their right to vote. Historians have acknowledged that the Freedom Vote was the impetus for Freedom Summer (1964). The Freedom Vote, Lawson points out, created a structure and organizational framework, inspired agency in Black Mississippians, and pioneered the use of white students to draw media attention–all tactics that were used to challenge the all-white representatives of the Mississippi Democratic Party.

Lawson argues that rhetoric is the “primary agent” through which social movements perform their necessary functions. Using this as the basis for his analysis, Lawson explores a variety of sources, including songs, speeches, leaflets, and organizational records. After introducing his readers to Mississippi’s legal and extralegal efforts to resist integration and extending citizenship rights to Black people, Lawson moves the readers through the events of 1963, including the Jackson sit-ins and the assassination of NAACP leader Medgar Evers. These led up to the Freedom Vote, which Allard Lowenstein and Bob Moses conceived after Lowenstein learned about the African National Congress’ “Day of Mourning,” held on election day in South Africa when Black South Africans were barred from the polls. Like the “Day of Mourning,” the Freedom Vote would be a protest.

Lawson notes that the famous images of the Jackson sit-in showing the Tougaloo students and faculty being abused helped to draw attention to the need for change. This image showed the “antidemocratic” behavior Black Mississippians faced on a regular basis and exposed it to the rest of the nation. After the Jackson sit-in picture drew attention, Lowenstein and Moses with COFO used the attention to organize activists. The two recruited Aaron Henry, a Black pharmacist, to run for governor, and Reverend Edwin King, a white minister, to run for lieutenant governor. The Freedom Vote became a model for future organizing because it recruited young white college students from the North and engaged in an “instructive style of protest” to educate as well as organize. Lawson analyzes the organization, recruitment, and canvassing as texts that influence the movements that follow. In doing so, he shows how the Freedom Vote was constructed as a purposeful event to prove to white America that Black Americans desired the rights guaranteed by a democracy in an undemocratic state and nation. 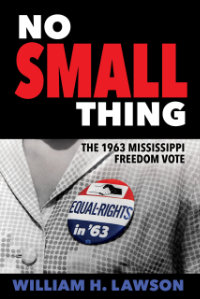 One central theme in the book is the role of media. As Lawson argues, the news helped to create meaning and “naming” was a strategic way to target consumers. In the case of the Freedom Vote, the media often referred to it as a “mock election.” Although Lawson notes that it was important for the media to address the Freedom Vote at all, this label created a “symbolic meaning” that would influence opponents’ interpretation of the event as a meaningless exercise. On the other hand, for Black Americans, it proved that the desire for the vote was real. Few Mississippi newspapers covered the event, and of those that did, most focused on the white college students or buried it in the paper. This coverage instructed readers on how to interpret the Freedom Vote. This analysis of the media offers another perspective on existing scholarship that portrays the media’s role as an impediment to change.

Lawson is also interested in the visual media and speeches that the campaign used to educate their desired audiences about the purposes of the Freedom Vote. The flyers and posters featured patriotic messages in their repetition of the word freedom, which for Lawson indicated a link to American tradition. At the same time, the biracial ticket of Aaron Henry and Edwin King challenged Mississippi segregation laws. The campaign material both made claims to tradition by emphasizing the desire for freedom and undermined Southern tradition by featuring pictures of their Black candidate for governor and his white running mate. Lawson argues that this material also serves a “pedagogical purpose” because it provides future students of history context about the time period and perhaps would inspire some to political action.

The Freedom Vote organizers engaged a number of rhetorical strategies to appeal to local people and inspire their participation. The organizers used both religious and political language in rally speeches and campaign literature. Lawson argues that fusing religious and political discourse was an important tactic to help ease the fears of participants and link the Freedom Vote to a divine mission to empower Black citizens. This was often expressed through the use of song, religious or otherwise, and the purposeful alteration of lyrics to fit the moment. At some campaign rallies, for example, organizers sang “When the Votes Come Rolling In,” to the tune of “When the Saints Go Marching In.” This rhetoric served to organize, inspire, and educate people in political participation and demonstrate to outsiders their desire to do so.

Overall, Lawson’s book offers valuable insights on the Freedom Vote and in so doing makes a meaningful contribution to the literature on the Civil Rights Movement. However, the book leaves some issues unaddressed. Although image and rhetoric may bring social movements into being, Lawson does not discuss how facing the daily indignities of racism can compel people to action. Images and words certainly galvanized activists to support civil rights, but that was not the only inspiration for Black Americans, many of whom did not need newspapers to tell them how pervasive racism was in the South. The size and scope of the Freedom Vote was certainly significant, but, Lawson does not explore other prior events might have inspired some of the rhetorical strategies of its organizers, including the regular use of patriotic language in protest literature.