The #MeToo movement and the recent attention to Recy Taylor’s 1944 rape has drawn much needed attention to the consistent sexual harassment and assault women, and many men, have endured. The conversations that have emerged target the normalization and “blame the victim” mentality that prevails in American culture. Recy Taylor’s brutal rape and assault, well-documented in Danielle McGuire’s At the Dark End of the Street, reveals an all too often ignored part of American history—the systematic and violent sexual exploitation of Black women.

Americans are hesitant to confront, let alone acknowledge, that the sexual assault of Black women was institutionalized during slavery and perpetuated under Jim Crow and beyond. More troubling, white feminists often treated—and continue to treat—sexual assault as solely a gendered, and not racialized, issue. The Taylor case is one of many that went largely ignored by the white community—a community that refused to acknowledge white men’s abuse of Black women. In the 1930s, however, one case captured the attention of the white community: the attempted rape of Rosa Lee Ingram.

Rosa Lee Ingram was a 40-year-old widowed sharecropper with twelve children in Schley County, Georgia. On November 4, 1947, John Ethron Stratford, a white sharecropper who lived on the same property as Ingram, confronted her with a rifle. Stratford had harassed Ingram for years, but on November 4, he tried to “compel her” to have sex with him. She fought back, and her sons came to her aid. At the end of the fight, Stratford lay dead, and Ingram and four of her sons—Charles 17, Wallace 16, Sammie Lee 14, and James 12—were arrested and detained in separate locations. In a one-day trial on January 26, 1948, Rosa Lee Ingram and her two sons Wallace and Sammie Lee were found guilty and sentenced to death. Charles was tried separately and found not guilty based on insufficient evidence, and James was eventually released. Ingram’s mother, Amy Hunt, contacted local organizations for help. The NAACP began to rally for her defense, and the nationally syndicated Pittsburgh Courier carried the story on its front page. Ingram’s case now had a nationwide audience.1

The International Labor Defense (ILD) managed to raise awareness around the injustice in the legal system for Black defendants in the 1930s with its work on the Scottsboro boys and Angelo Herndon case. As the Cold War escalated, the ILD and the National Negro Congress, both Communist fronts, combined their legal efforts under the Civil Rights Congress (CRC), a civil rights organization led by Communist leader William Patterson. Rosa Lee Ingram was the first Black defendant the CRC took on; however, the NAACP represented Ingram in court. The Communist Party immediately began to raise awareness among its members, featuring the story in the CPUSA’s Daily Worker. The Party further rallied its members by calling the case the “new Scottsboro.”

The CRC’s skills in agitation propaganda were successful in raising awareness on the Ingram case. It held rallies, produced pamphlets, and sent legal representatives to observe and investigate the case. The CRC also tried to raise funds for the care of Ingram’s other children during her incarceration. However, at the height of the Cold War, the CRC’s involvement was a liability, and the NAACP was wary of its involvement, fearing that the CRC’s criticism of Georgia officials could make things worse for the Ingrams. 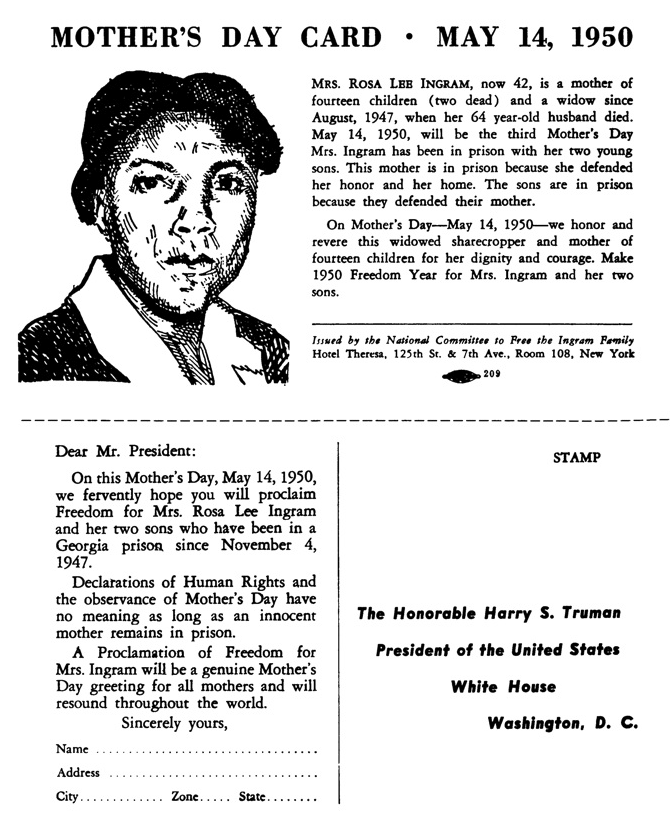 Communist leader Claudia Jones argued that Ingram’s case exemplified the “oppressed status of Negro womanhood,” in her well-known article, “An End to the Neglect of the Problems of the Negro Woman.” Jones wrote that Ingram’s only “crime” was to defend herself from the “indecent advances of a ‘white supremacist.’” The case, she pointed out, reflected the “daily insults” Black women were subjected to despite their status. Jones also pointed out the double standard at the heart of racist attacks—that while white men were defiling Black women and accusing Black men of sexual assault, they were hiding “behind the skirts of white women,” claiming that they had to “protect white womanhood!” While white men were clinging to “chivalry,” they were covering up their own “foul crimes.”

Jones placed particular responsibility on white women. She argued that it was white women’s duty to challenge the lie that Black men were sexual predators while covering up white men’s crimes. She challenged white women to ask themselves, “How long shall we allow this dastardly crime against all womanhood, against the Negro People, to go unchallenged?” It was also in her discussion of Ingram that Jones articulated her vision for socialist revolution—the recognition of Black women’s triple oppression as Black, woman, and worker. Furthermore, she asserted that racism was prior to and “not equal to” the woman question. Jones put sexual exploitation at the heart of her socialist feminism. As historian Timothy Tyson and others have argued, American racism pivots on sex, the fears of interracial sex, the regular and systematic abuse of Black women, and the false accusations of rape and sexual impropriety against Black men. To let it stand uncorrected means to leave racism unquestioned and intact.

Jones and other prominent Black Communist women, including Thyra Edwards, rallied to draw attention to Ingram’s case and to Black women’s triple-oppression. In 1946, Jones and Edwards, along with other Communists, became involved in the Congress of American Women (CAW), a women’s rights organization associated with the Communist-linked Women’s International Democratic Federation (WIDF). In 1948, the CAW began its own campaign in Ingram’s defense. For the CAW, Ingram came to symbolize the “oppression of Black women” in the south. But like the CRC, the CAW would be handicapped by the intense anti-Communist sentiment in the United States.

In 1950, rather than register as a foreign agent under the Foreign Agents Registration Act, the CAW dissolved itself. The CRC survived into the 1950s and continued its support for Ingram. Every Mother’s Day, the CRC held rallies for Ingram. It also petitioned the Justice Department for federal intervention, and eventually the U.N. Commission on the Status of Women, declaring that Ingram’s human rights had been violated. By the early 1950s, the NAACP instructed its local branches to disaffiliate with any Communist-linked organizations. This seriously hindered the CRC’s work in the south. With ongoing pressure from federal authorities, hostility from locals, and the unwillingness of liberal organizations to work with them, the CRC disbanded in 1955. 2

Rosa Lee Ingram and her sons, Wallace and Sammie Lee, spent twelve years in prison. The three were paroled in 1959. The NAACP helped the Ingrams get back on their feet and found work for them. As they tried to get their lives together, their case continued to resonate among activists. While tensions ran high between the NAACP and Communist-led organizations, those on the left saw in Ingram’s case the embodiment of American racism. As Claudia Jones argued, Black women’s sexual exploitation was not a rare occurrence, but a daily insult, and white women’s willful ignorance on the topic prevented real substantive change for all women. As the current #MeToo movement has revealed, these divisions and misunderstandings persist—to the detriment of all women.

Comments on “The Historical Erasure of Violence Against Black Women”