loading...
By Chris Cameron October 6, 2015 Comments Off on State of the Field Roundtable at #ASALH100 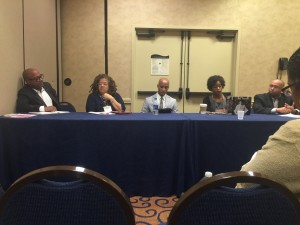 At the recent meeting of the Association for the Study of African American Life and History, I had the pleasure of chairing a roundtable discussion on the state of African American intellectual history. The discussants, pictured from left to right, included Derrick Alridge, Mia Bay, and AAIHS bloggers Brandon Byrd and Jessica Johnson. Each person gave opening remarks of about 10 minutes, followed by an hour of discussion.

Derrick Alridge began by noting that while working on his dissertation at Penn State during the mid-90s. he often got the question: What type of historian are you? Discussions with V. P. Franklin and Wilson Jeremiah Moses helped him come to see himself as an intellectual historian, but this raised even more questions. Among these were: What are the best methods and approaches to study intellectual history? Do you need to conduct archival research for intellectual histories? While many see intellectual history as largely textual analysis, Alridge found great benefit to reading W. E. B. Du Bois manuscript letters for what would become his important work on Du Bois’s ideas on education. Archival work was key to this first book, but his current project The Hip Hop Mind is a bit more challenging, as there are few archival sources on the topic. Thus, he has had to get creative, relying on iconography, music videos, documentaries, and even reading tattoos of figures such as Tupac Shakur as texts. In thinking through his own approaches to intellectual history, Alridge called for scholars to write articles that explicitly frame the field and discuss what black intellectual history is, how we go about studying it, and why it is important. Historians such as Henry May and James Kloppenberg have done this for the field of American intellectual history in venues such as Modern Intellectual History and the Journal of the History of Ideas. Scholars of black thought would be wise to do the same in the Journal of African American History or venues such as the Journal of African American Studies.

Mia Bay followed by noting that she is very optimistic about the field and that the creation of AAIHS marks the emergence and increasing coherence of the field of black intellectual history. About a decade ago, Bay, Farah Griffin, Martha Jones, and Barbara Savage created the Black Women’s Intellectual and Cultural History collective (BWICH) in order to establish a distinctive field. At the time, they noted that most scholarship on black women focused on either their roles as activists or as objects of intellectual history, not as producers of knowledge in their own right. When people did focus on black women’s thought, they looked at individuals and not the larger currents of thought behind black women’s activism. The goal of the collective, and the edited collection Toward an Intellectual History of Black Women that emerged from the collective, was to explore new questions and challenge the idea that black women were not intellectuals. The book shows how black women’s idea grew out of their unique experiences in slavery and Jim Crow and employs innovative sources and questions to examine issues ranging from the role of black women in the spiritual practices of slave ships to black women’s racial and political thought. Bay noted that the collective and the edited collection show that there are specific themes of black women’s intellectual history. For one, this is a new sort if intellectual history that challenges the conventional wisdom about where and when intellectual work takes place. Second, black women used a wide variety of vehicles to share their ideas, including essays, poetry, editorials, and association proceedings. They rarely worked in the academy but rather on public podiums, in churches, and clubs. To get at their ideas, scholars must ask big questions that may reformulate the contours of intellectual history: Under what conditions are ideas produced and where should we look for them? What is the relationship between the lived experience and the production of ideas? And what happens when ideas exceed and break apart social and analytic categories? These and others are the questions that should shape the field going forward, Bay argued.

Brandon Byrd’s talk also focused on developments in the field over the last decade. Byrd was first drawn to black intellectual history after reading Gerald Horne’s 2006 article “Toward a Transnational Research Agenda for African American History in the 21st Century” in the Journal of African American History and he uses this article as the point of departure for evaluating recent scholarship on black thought. Horne called for greater examination of the way that blacks influenced and experienced the founding of the United States and Byrd notes that scholars of black intellectual history have explored a revised version of this question, namely what were the characteristics of black thought in the early republic. Stephen Hall and Leslie Alexander have highlighted the creation of black transnational identities, Hall by exploring historical writing, and Alexander by focusing on political activism. Sara Fanning has likewise shown how the Haitian emigration movement reflected black Americans’ hopes for citizenship and the Pan-African rhetoric of Haitian leaders. Moving into the later 19th century, scholars such as Michele Mitchell have shown how black thought intersected in various ways with American imperialist objectives, while Robeson Taj Frazier and Yuichiro Onishi examine Afro-Asian connections and blacks’ anti-imperialist ideas. Other exciting recent works to answer Horne’s call for a transnational black history include Adam Ewing study of global Garveyism, which draws on archival sources from around the world (see this flier for our upcoming roundtable on the book). Byrd concluded by noting that despite the publication of Toward an Intellectual History of Black Women, more work needs to be done on black women’s intellectual history, especially the intellectual history of women in the Black Panther Party (see blogger Ashley Farmer’s work on this topic) and other radical movements. Further, Brenda Gale Plummer’s work points to another exciting possibility, the intersection of American diplomacy and black intellectual history, which was the subject of our last blog post here at AAIHS.

Jessica Johnson concluded this portion of the roundtable with brief discussion of her own research and an exploration of the intersections between black intellectual history and the digital humanities. Her current book project looks at enslaved women from Senegal who ended up in New Orleans, stopping at various points in the Diaspora along the way. The central question of this study is: What is the black liberatory project?, a question Johnson notes should be at the center of African Diasporic intellectual history. In addition to her monograph, Johnson has spearheaded or is a part of numerous digital projects, including the Queering Slavery Working Group and African Diaspora, Ph.D. These digital projects, along with AAIHS, Johnson noted, are important parts of black intellectual history because bloggers are bringing conversations we have been having for decades into light and to the public. As Alridge mentioned, historians have been studying black thought for decades but the rise of digital history makes this scholarship much more accessible and widely known, both within the historical profession and without.

The discussion that followed was an incredibly lively and enlightening one and focused on a number of questions, ranging from the distinctions between black cultural and intellectual history to the utility of studying the history of ideas versus the history of particular thinkers to the place of AAIHS in the field going forward. Like Mia Bay, I was already pretty optimistic about the state of the field and left this session and the conference even more so. In just a couple weeks, AAIHS bloggers Brandon Byrd, Ashley Farmer, Greg Childs, and myself will take part in a similar panel at the Society for U.S. Intellectual History’s annual conference so we hope to see you there.