loading...
By Jessica Marie Johnson October 12, 2015 Comments Off on Black Death: Gore, Geographies and the Gallows in Jamaica 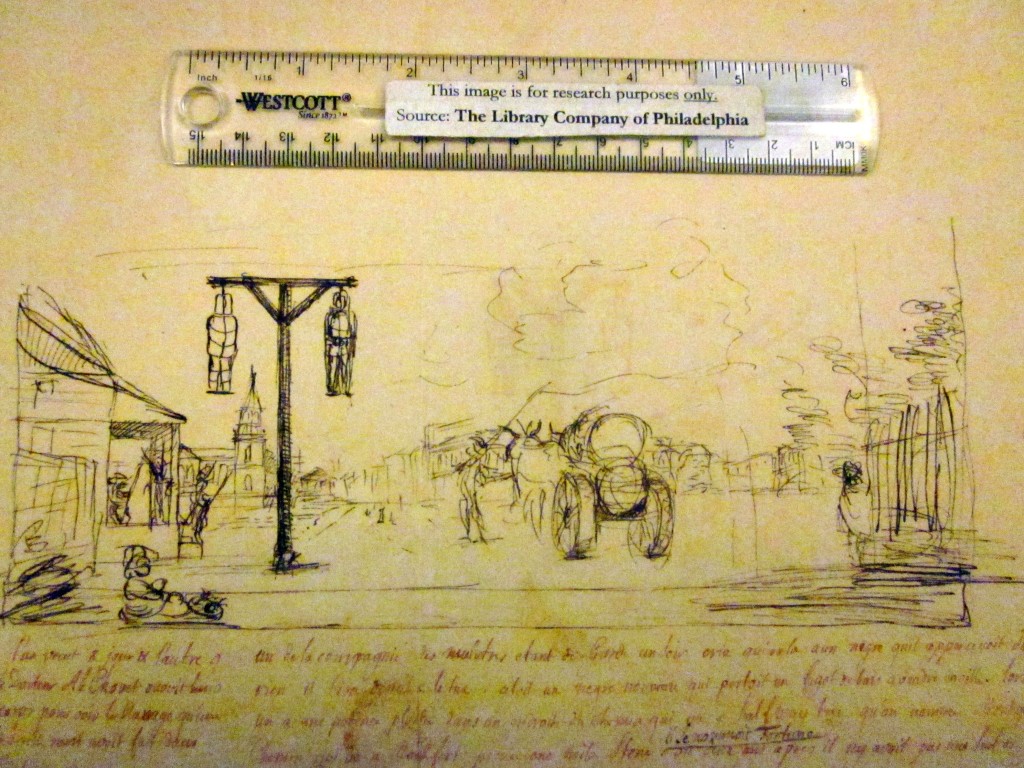 One evening, on a road in Jamaica, a soldier belonging to the “Mulatto Company” made his evening rounds. He came upon a black man in the woods. The soldier called for his attention. Receiving no answer, he killed him.

Upon closer inspection, the man was identified as a “new negro” gathering wood to sell in town. Death was not the end for the “negre nouveau.” Once he was dead, his body was placed in a cage hung from a gallows planted at a busy intersection in town. His body remained “for all to see” at that crossroads–somewhere between Montgomery’s Corner, near a road named Rockport, and close to One Mile Stone. After two years, he/it was called ‘Fortune,” and the black men, women, and children who passed treated the body as a relic, an item with spiritual powers or import.

Geneva-born antiquary Pierre Eugène du Simitière created the sketch and scribbled the story sometime between 1757 and 1774 during his travels between Jamaica, Saint-Domingue, and North America. The image and more is available at the Library Company of Philadelphia. Pierre Eugene du Simitière’s collection is a puzzle. Du Simitière remained preoccupied with revolution, revolt, and resistance (including maroons’ resistance in Jamaica, slave resistance in Saint-Domignue, and Native resistance and negotiations with British and American delegations in North America) throughout his life. However, if his collection is the evidence, du Simitière was also preoccupied with the occult, arcane, and gory required to make and unmake empire. This image, his hasty creation of it, and the subject matter itself suggest he found the crossroads of both in the decomposing body of a black man from Africa.

I’ve more questions than answers about what this display of death meant, then and now. As Marcus Wood noted, in a short essay on the same sketch, the man who would become a body called Fortune was likely a slave recently arrived from the continent, hence the slaveowner parlance of “new negro.” He may or may not have been killed because he did not understand the “Who goes there?” shouted by the mulatto soldier in his direction. He also may or may not have been a slave. He may have been a Jamaican maroon or a runaway making a new life for himself far from his former owners caught away from camp.

And who was the soldier who fired his gun? Imperial officials in Jamaica organized units of men of African descent to staff military, police, and related security and surveillance operations. Jamaica wasn’t alone. Across the Caribbean, Central and South America “Mulatto” and “quadroon” martial units appeared out of necessity and convenience, sparked by three phenomena: spreading gran or grand maroonage or long term escape from plantations; decreasing white European and creole (American born) colonial populations as white migrants died, deserted, disappeared, or simply rebuked local militia service; and official decisions to offer freedom to slaves in return for their enlistment. What relationship did this soldier have to the spectacle of death, an excess that would infuse the body of a man with spiritual resonance, transform him from human into an act of nature? What did the same excess transform the soldier into?

I suspect Du Simitière captured a confrontation between two black male geographies. And geographies–ideas of them, maps in hands and heads, differential ways of viewing a landscape–portend intellectual histories told and telling.

On the one hand, we have the geography of maroonage or trails through the forest invisible or ignored by slave patrols but visible to slaves seeking exchange economies beyond slaveowner and overseer gazes. The path in the forest where the best and driest wood could be found. The quickest route to town to sell provision ground harvests. The night road taken to visit the beloved on neighboring plantations.

On the other, we have the geography of freedom in a world of slaves, or the path walked by free people of color (and free status aspiring slaves) that marched them into militia lines against runaways, launched them into battle against enemies of empire whether those enemies came in the form of Native resistors or insurgent white colonials, and secured them property, marriages to women, and other rewards of free status–until the next imperial war changed the rules.

To judge by the confrontation between these two geographies, where the twain shall meet shall end in death–and not the soldier’s. Or does it? Fortune lived on, as a gesture of imperial power, to be sure, but also as a holy item on display as warning (and, perhaps, guardian?).  Depending on the diasporic systems of belief at play, did he die–or did he return? And by the same standards, did the soldier truly live on? Or does freedom–black, patriarchal, and with its hands on a gun–always end in death, at least in a world of slaves?

Phil Lapsansky: Appreciations. Philadelphia: Library Company of Philadelphia, 2012.
Share with a friend:
Copyright © AAIHS. May not be reprinted without permission.