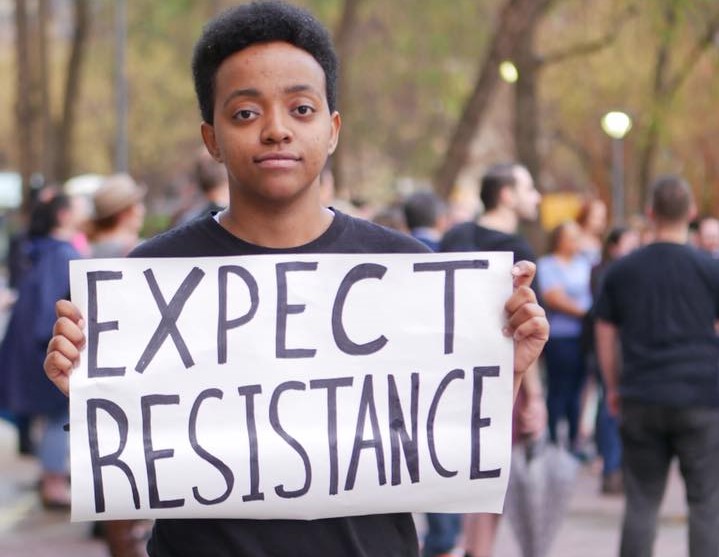 In today’s post, Ajamu Amiri Dillahunt, a senior majoring in political science at North Carolina Central University and intern for Black Perspectives, interviews Nhawndie Smith. Smith is co-director of Ignite NC and helps guide regional programming, operations, and strategic development of this statewide youth leadership-organizing program. They are a non-binary troublemaker from Durham, N.C. that also works with the BYP100: Durham Chapter and Black University—both organizations committed to building on teachings from the Black radical queer and feminist traditions. Previously a fellow and a field organizer with Ignite NC, Smith has worked to sustain the power of Historically Black Colleges and Universities in North Carolina, to build access to LGBTQ+ affirming spaces, to stop the criminalization of Black and brown communities. They continue to focus on developing youth leadership. Follow Ignite NC on Twitter @NC_Ignite.

Nhawndie Smith: I was introduced to organizing and grassroots social justice work through the global responses to Mike Brown’s murder. In Fall of 2014, I experienced my first mass protest put on by the Greensboro chapter of the Black Lives Matter network in North Carolina. There were various events occurring in solidarity with Brown’s family and the residents of Missouri during the Ferguson Uprising. These experiences led me to get involved with local direct action organizing work. Since then I have been involved in various forms of organizations, including collectives, membership-based groups, and mass formations. Every experience has shaped my understanding of movement building in the current iteration of the Black freedom struggle.

Dillahunt: How did your experience at North Carolina Agricultural and Technical State University influence your understanding of social justice and student organizing?

Smith: At North Carolina A & T I was able to meet and connect with many professors and alumni that were and still are instrumental in social movement work including Rev. Nelson Johnson, Joyce Johnson, Dr. Claude Barnes and James Steele. Professors in the political science department, particularly Derick Smith led me to the Queer People of Color Collective and Beloved Community Center. Through folks like April Parker and Irving Allen I found myself constantly torn by the college-city divide and the exploitation that shaped that dynamic. This led me to Ignite NC, an organization that would forever change how I understand change and how I view personal transformation as the catalyst for larger-scale culture shifts. This organization provided me with the tools and connections to intervene on the lack of accessibility for trans and gender non-conforming people at my school via 1-on-1s, canvassing, teach-ins, and direct action. HBCUs perpetuate respectability, white supremacy, patriarchy, homophobia, transphobia and many other -isms I would hope to not have in such an inspiring critical thinking space. There are many that recognize this and are doing the work to foster an environment that encourages the freedom of all Black people. Shout-out to Trinice McNally and the many Black scholars that have guided my work within these institutions. Because of them I made a commitment to the leadership development of young Black people and co-created a network for all HBCU students across the state known as Black University.

Dillahunt: Can you talk more about your work with Ignite NC and the work you all do in North Carolina?

Smith: My work as a fellow with Ignite NC has included advocacy for tuition freezes in higher education, greater accessibility to LGBT+ affirming spaces, as well as police accountability by community members. As a field organizer I helped host sexuality and gender competency trainings and helped raise awareness around voter suppression. I have also helped connect emerging leaders with local radical organizations. Throughout North Carolina we have trained over 300 people in the past five years in the fundamentals of power and oppression, effective messaging, base building, and direct action. We help build capacity for movement work by developing young, visionary leadership for the sake of creating more possibilities for institutional reforms and structure shifting.

Dillahunt: What is the role of HBCUs in the freedom movement in North Carolina?

Smith: Historically Black Colleges and Universities have been places where Black folks advanced their critical thinking and technical skills. In North Carolina, where Shaw University is located many HBCUs were birthed to fill a need for more educational spaces that were welcoming for Black people to come and grow as they are. These institutions have made it possible for those without access to quality public education the opportunity to thrive. Politically HBCUs have been the places where Black people here and abroad come to be grounded in the history of the Black freedom struggle in the heart of the imperialist empire, the United States. Just about every HBCU in North Carolina had a role in the sit-in movement during the Civil Rights Era, whether it was in demonstrations for resistance, legal pursuits against Jim Crow law or convening to set agendas towards a Black university. HBCUs are a container for necessary strategizing and angelic troublemaking. Although the radicalness of these spaces fluctuates over time, they are consistently a beacon for those wanting to get a historical grounding in the Black radical tradition and to build local power.

Dillahunt: What is North Carolina’s role in the larger Black freedom movement?

Smith: North Carolina has been a hub for Black political resistance and resilience. Since the inception of one of the first public higher education institutions, the University of North Carolina, people have been organizing against white supremacist, confederate statues and using facilities that did not allow people in because of their race or gender. During reconstruction cities like Wilmington presented us with the possibilities of a truly representative government. Durham exemplified economically thriving Black communities with its Black Wall Street. During the 1950s and 1960s during the Civil Rights Movement leaders like Ella Baker, who helped form and guide the Student Nonviolent Coordinating Committee, gave us more models to practice and from which to learn. Earlier this year at a Durham city council meeting Ms. Virginia Williams, was spotlighted for her service in the local neighborhood in which she lived. She mentioned that “this is not the Durham I found when I came here” and graciously received her award with a challenge to herself to continue being in service to her community. It was not until someone recognized her as one of the seven people to sit in at the then segregated Royal Ice Cream parlor in Durham, NC in 1957 that the impact of this state and my time here became clear. Arguably a primary igniter of mass civil disobedience in North Carolina during the Civil Rights Movement, Williams remains humble and as committed as ever to service. As the Greensboro Four–who led the desegregation of Woolworth in 1960–saw with the help of students from Bennett College, North Carolina A & T and Dudley High School, ordinary people knew that they had to be the ones to make change because power does not concede without a demand.

Dillahunt: How are you working to build Black political power in the State of North Carolina?

Smith: I am and will continue to build Black political power through the development of emergent leadership and relational coalitions/collectives. My focus will be on providing vision labs, trainings and resources among historically marginalized communities so that they are centered in rooms that hold decision-making power. Through my work with Black Youth Project 100 I hope to grow a culture of collectivism and an understanding of the connections between the criminal injustice system and gender-based violence. Within a collective I helped form with you Ajamu, as well as Delaney Vandergrift, D’atra Jackson and Tamika Lewis I will push the efforts at political education and alternative institution creation that are part of our communities’ traditions. In my work with Ignite NC, I will continue to grow the capacity of youth-led organizing and ensure that young people are prepared in all the ways they can be to be principled leaders in the future worlds we hold in our dreams. My work to build power is for the sake of restoring our communities to those that love each other and actively work to be anti-colonial in our language and actions. This starts with recognizing the work we all need to do and the history of the occupied land we have been offered to sustain today’s change-making work on.

Dillahunt: How can people support the work of Ignite NC?

Smith: As one of the co-directors of Ignite NC, I am one of the primary fundraisers, helping to sustain the organization and opportunities created for those in our training program. To support organizing work led by young people of various races and genders that believe in a world beyond patriarchy, white supremacy and capitalism folks can donate to Ignite NC or offer space, food, materials, sponsorship and anything that you have to offer the future generations fighting for the liberation of all oppressed people. In this iteration of the Black freedom struggle, I urge everyone wanting to restore democracy and human rights to pour into work being led by Black and people of color that hold people over money!