loading...
By Jenn M. Jackson November 13, 2018 Comments Off on Black Lives Matter: Not a Moment, But a Movement

Though it was first created as a hashtag in 2013 as a response to Trayvon Martin’s death at the hands of citizen vigilante George Zimmerman, many Americans were introduced to the term “Black Lives Matter” in summer 2014. The chant became a rallying cry in the days following the murder of 18-year-old Michael Brown by then-officer Darren Wilson in Ferguson, Missouri, a suburb of St. Louis. The sequence of protests and community-led resistance in the Midwestern city catalyzed what would later become the Movement for Black Lives (M4BL). And, now, we have a clearer picture of how that movement and its members shaped politics as we know it today.

In Making All Black Lives Matter: Reimagining Freedom in the 21st Century, historian and long-time activist Barbara Ransby relies on first-hand accounts, case studies, interviews, and participant observation in grassroots organizing to show how a moment in Ferguson turned into a movement of marginalized citizens across the globe and why that matters for Black Politics. Further, she challenges readers to reckon with the ahistoricizing of Black movements as having no historical roots, since “no movement emerges out of thin air” (11). Emphasizing this fact, Ransby’s account starts well before 2014, cataloguing decades of social movement work from such feminist organizers as Angela Davis, Ruth Wilson Gilmore, Rose Braz, Barbara Smith, Beth Richie, and Cathy J. Cohen. These accounts create a genealogy of a community-based struggle that existed before hashtags. 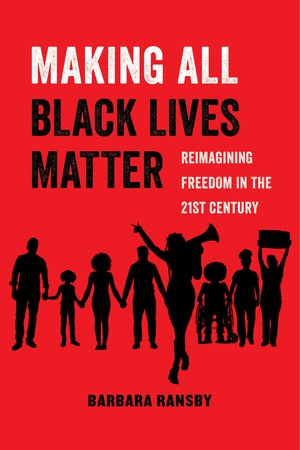 Making All Black Lives Matter then maps the infrastructure and framework of a Black, queer, and feminist movement led by mostly young, Black, working-class women like Alicia Garza, Patrisse Khan-Cullors, and Opal Tometi. To orient us toward this concept, Ransby offers us the language of “Black-led mass struggle,” which are forms of resistance that center “the oppression, exploitation, and liberation of Black poor and working-class people” (3). In this way, Ransby situates the M4BL as rooted in a long history of Black resistance and movement work that has never been mutually exclusive with feminist or class struggle. Rather, as her work theorizes, the Movement for Black Lives represents a fundamental departure from previous mass struggle for Black liberation both in its leadership and in its philosophical motivations.

In the subsequent chapters, Ransby connects the regional movement work in Ferguson to social movement organizing in cities like Chicago, New York City, Baltimore, and Oakland. In the process, Ransby shows us how young Black people who were still in their teenage years, like Alisha Sonnier, became de facto leaders of mass struggle. In Ferguson, these young freedom fighters were often learning how to organize and resist in the very moments they confronted National Guard members called in by Governor Jay Nixon. In other instances, more formal organizations were created like BYP100, Million Hoodies, and Dream Defenders, showing that the movement was leader-full, pushing back against the popular trope that suggested otherwise.

But, the movement hasn’t been without its challenges. In the fifth chapter, Making All Black Lives Matter highlights the ways that trans and cis Black women have been marginalized, erased, and, often, overlooked in the M4BL. In some cases, those fissures gave way to philosophical divides between movement leaders. Ransby shows how these divides, which emerged over social media tactics, class struggles, accountability measures, and generational disagreements, were part of the growing pains in an ever-evolving movement. As Ransby says, “folks who are barely getting by on poverty-level wages or below are in a coalition that includes professionals with college degrees and lucrative salaries. This is a recipe for some level of tension” (122). But, Making All Black Lives Matter shows that these disagreements, like those in Black struggle before them, were a necessary part of building, growing, and sustaining resistance work. They were evidence that young people, many of whom were never organizers before 2013, were learning what it meant to be in that struggle together.

Bringing the text back home to Chicago, Ransby focuses on the unique history of one of the most segregated cities in the country with an expansive history of violent police interactions. From the assassination of the 21-year-old, dynamic leader of the Illinois Black Panther Party Fred Hampton to the murder of 22-year-old Rekia Boyd by off-duty Chicago Police Officer, Dante Servin, the city remains a focal point in today’s movement and resistance work. Ransby shows that Chicago, like Ferguson, is a local exemplar of a national phenomenon. And, in cities around the country, it is the work of young Black people that has sustained the Movement.

In a political moment where Black liberatory work rarely includes time for archiving, reflection, and record-keeping, Making All Black Lives Matter is a critical contribution. The meticulous work Ransby puts into naming those present, acknowledging their contributions to the Movement for Black Lives, and illustrating how the various, seemingly amorphous, pieces of this global movement structure fit together represents a substantial and significant contribution to both historical and political social movements literature.

Most importantly, Making All Black Lives Matter provides just a small glimpse into what activists and organizers mean when they talk about “the work.” For example, when Ransby describes this “ecosystem” of movement work, she pays special attention to the role of “political quilters” who stitch together “disparate patches of struggle” (148). These actors are vital in networking movement work across space and time.

A primary strength of Making All Black Lives Matter is its honesty. Rather than set out to redeem the Movement or paint in broad strokes of positivity, Ransby provides a realistic picture of what struggling against state power means for those communities which are most marginalized and least resourced in the United States. Moreover, Ransby’s approach, one guided by both her historical expertise and her deep commitments to Black-led mass struggle, portrays movement work as a process rather than a product.

Essentially, where mainstream narratives proclaim that movements and protests simply erupt erratically from anger, pure emotion, and vengeance, Ransby is a balm. She shows how every mass-led struggle sits atop the labor, sacrifices, and investments of many organizers who will never be seen, named, or rewarded for their contributions. As Ransby proves, their work matters, too.

Jenn M. Jackson is a doctoral candidate in the Department of Political Science at the University of Chicago where she has also received a graduate certificate in Gender and Sexuality Studies. Jenn’s research interests include Black Politics, news media and public opinion, social movements, and gender & sexuality. Follow her on Twitter @JennMJack.