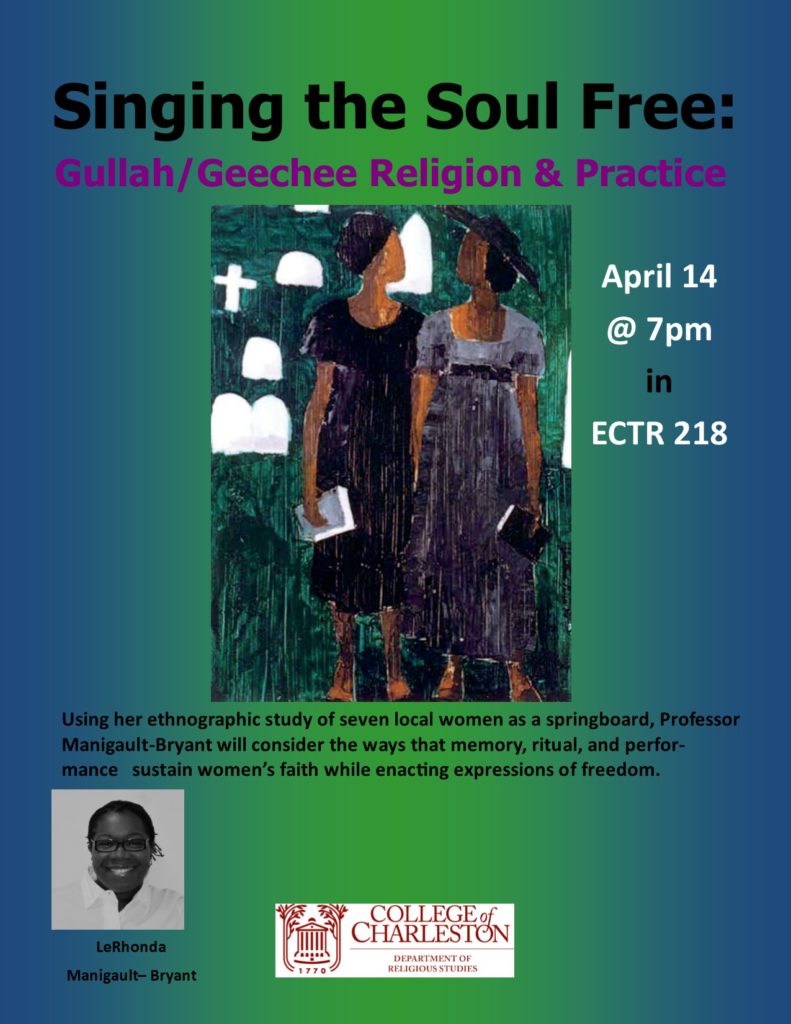 Last week, I had the great opportunity to give a talk at the College of Charleston. Guided by my research in Talking to the Dead: Religion, Music, and Lived Memory among Gullah/Geechee Women (2014), I argued that gospel music in the South Carolina lowcountry has historically and continues to demonstrate active constructions of freedom for black women.

Below is an excerpt from my remarks, as well as link to the audio of the songs highlighted in my talk. I hope as you listen that you experience the deep historical memory that continues on in this music.

How do black women here in the lowcountry create spaces in which they can be free? I ask this question in light of the tumult of our current context where this country in general, and black women, men, and children in particular, are grappling with the question “do black lives really matter?” I also raise this query while noting the irony—or rather the serendipity—of my location. I am standing, less than 40 minutes away from the small town where I grew up, but also less than a mile away from a place where I literally ate and played—Emanuel AME Church, the place from which my recently deceased grandmother Phyllis, lived directly across the street. That Mother Emanuel, a historic site for black activism, religiosity, and sacred freedom, has become a site of a kind of sacred terror is beyond ironic. It is tragic. It is terrifying.

Questions of freedom are heavily upon my mind, even more than usual, and fueled by my increasing concern regarding the constructions of sacred terrors. Freedom, I argue, is not merely, solely or even exclusively the aspiration for something more, something better. It is not solely futuristic. Rather, freedom reflects the ability to, in the present, carve out a life where attaining greater knowledge of one’s God is not necessarily accompanied by the plausibility of being gunned down.

Using my work in Talking to the Dead as a starting point, I want to consider how memory, ritual, and performance work together to sustain black women’s deep sense of faith, while enacting their expressions of freedom. I believe that, through music, or what I call singing the soul free, black women have created for themselves ways to merge their deep ties of faith with their limitless hopes for freedom—in the future and the present.

Admittedly, my entry into this work has everything to do with this simultaneously ironic-serendipitous impact of location. Context always matters, and I want to paint the best background picture that I can. As I describe in the prologue to the book, my own, visceral and unforgettable experiences just a few blocks away in the City Market not only attuned me to the occurrence, but it ensured that the practice of talking to the dead—as I know it and as referenced by the seven women in this study—guided my work.

Talking to the dead is a perceived ongoing exchange between the living and deceased members of the lowcountry of these communities. The practice occurs during traditionally “religious” customs, such as prayer and, what I focus on in the remainder of the talk, the singing of sacred songs. But it is also facilitated by sociocultural activities such as storytelling and sweetgrass basketry, and is important because of the ways it is a longstanding, yet underexplored spiritual practice that has particular resonances among black women.

In essence, talking to the dead is, as Yvonne Chireau suggests in her book Black Magic: Religion and the African American Conjuring Tradition (2006), a kind of intermediary category for us to explore the ways humans have engaged in a reality beyond their own, a reality delineated by the presence of divine beings, forces, and other invisible entities. I believe that talking to the dead as experienced and expressed among these seven women gestures to practices that exist between space and time, between the visible and invisible. For Lucinda, Roberta, Faye, Ruth, Yenenga, Lucille, and Beatrice—the seven women I most immediately highlight in this work—talking to the dead is the embodied manifestation of the liminal space between the living and the dead and the past and the present.

I am arguing that, through the process of singing the soul free, black women have created ways to merge their deep faith with their hopes for freedom. Key to these notions of freedom as exemplified in black sacred music are three features: appropriation, adaptation, and customization.

For the sake of time, I will focus on the process of appropriation as exemplified in the song “Couldn’t Hear Nobody Pray.” Music means a great deal to the women of my work, and is the vocal, sacred space they call upon to reaffirm their faith, and are a part of their lives within and beyond the walls of the church. Notably, music is an intimate part of their lives and they dynamically incorporate and pass these musical traditions on. They each actively participate in church choirs, local music groups, and use music consistently to enhance their work. The practice of music, much like their faith, extends beyond the weekly church services, monthly programs, and annual commemorations into their daily activities. Hence, the distinct rhythms and everyday quality of lowcountry music that have historically attracted attention to the Gullah/Geechee communities continue to be part of the religious music.

I am suggesting that lowcountry sacred music simultaneously takes on a cyclical and linear quality, which is best exemplified in the use of the lowcountry clap, and the repetition of verses that literally push a song forward to invoke The Spirit. The rhythmic practices and theological motifs of this music suspend and push time by connecting with past traditions, while denoting a spiritual bond that is simultaneously ancestral, communal, and divine.

The term appropriation often has a negative or derogatory meaning, especially in light of current, popular conversations regarding cultural appropriation. In this case, I use the term in its sense of something being devoted to a special purpose. “Couldn’t Hear Nobody Pray” was historically used to seek, the practice by which many black folks in the lowcountry became members of churches. During the seeking process, individuals participated in a probationary rite of passage, usually during their pre-teen and early teenage years, and they learned how to sing, pray, and recite scripture. Instrumental to that process was the expectation that the young women and men would have dreams and visions, which would be interpreted by a community of elders who would tell the youth into which church they would become members. Though now a defunct practice—replaced by the formal, more expedient process of “confirmation” or “new member” classes—seeking is significant because all of the women in the study experience it, and especially because the dreams and vision component explicitly facilitated talking to the dead.

Way down yonder by myself

The focal point of the song is prayer and reflection upon the intimate solitude that prayer facilitates, which was at the heart of the isolation achieved during the seeking process. While seeking, the emphasis was on a direct connection with God without the disturbance or affect of external influences.

“Couldn’t Hear Nobody Pray” is an important song because it shows how lowcountry music can accommodate one experience—in this historical case, seeking—and subsequently be appropriated to accommodate another experience—the contemporary focus upon and development of one’s personal relationship with God.

Take, for example, the additional verses inserted by the lead vocalist, including “on my knees” and “on the altar.” No longer relying on images of a chosen people, black women in the lowcountry have transitioned to an emphasis on the God who is present, real, and accessible. The music has become personally applicable, where motifs of right relationship and holy living operate alongside images of heaven and deliverance. These themes, which are commonplace in this music, reflect an ongoing theological appropriation of experience and belief.

Through the process of singing the soul free, black women have created ways to merge their deep faith with their hopes for freedom. Key to these notions of freedom as exemplified in black sacred music are appropriation, adaptation, and customization. For more on the significance and history of sacred music among African Americans in the South Carolina lowcountry, see Ain’t You Got a Right to the Tree of Life (1994) by Candie and Guy Carawan, Something to Shout About: Reflections on the Gullah Spiritual (1972) by Sally Plair, “Singing ‘Bout a Good Time: Sea Island Religious Music” (1980), and If You Don’t Go, Don’t Hinder Me: The African American Sacred Song Tradition (2001) by Bernice Johnson Reagon.

Comments on “Singing the Soul Free: Gullah/Geechee Religion and Practice”