I have nothing other than just sadness, once again, that we have to peer into the abyss of the depraved violence that we do to each other in the nexus of a just gaping racial wound that will not heal—yet we pretend doesn’t exist.

A text from my mother on the night of June 17, 2015 alerted me that something had happened in Charleston, and that “folks had gotten shot” at Emanuel African Methodist Episcopal Church on Calhoun Street. Hours before it hit the mainstream media, my mother had prepared me—in her own news-like fashion—of the terror that has subsequently unfolded.

Yet again, the news driving the global headlines has struck close to home for me. Last month, the Walter Scott shooting left me reeling in part because of its close proximity to my family. Today, I sit stewing in rage, sorrow, and fear at the needless execution of black lives. That this moment so readily harkens to the 1963 bombing at Sixteenth Street Baptist Church (Birmingham, AL) that snatched the young lives Addie Mae Collins, Denise McNair, Carole Robertson, and Cynthia Wesley, and injured over twenty others is disturbingly surreal. Many are writing, tweeting, chatting, and posting about the devastating, injurious media loop that has numbed us to the overwhelming violence against black bodies. So too are we discussing the increasing sense of return to an era that looks and feels like the pre-Civil Rights period than to the twenty-first century. My conversation with my good friend and social media goddess Nyasha Junior a short while ago solidified the sense that, even though the outcries against this act are timely and meaningful, my cup of hope is far from running over. Rather, my storage is nearly empty.

I know Emanuel African Methodist Episcopal Church well. My familiarity with Emanuel AME is not just because I am a religious scholar of the American South and I know the church is among the oldest black churches in America (1817). It is not solely because I am from the South Carolina lowcountry and was taught at a young age how Emanuel AME was a space for Denmark Vesey and Gullah Jack to protest their conditions during the era of enslavement before they were hanged and the church was burned to the ground.[2] Nor is my familiarity with Emanuel AME because I have written about the religious practices of South Carolina’s Gullah/Geechee folks.[3] My relationship with “Mother Emanuel” is an intimate one, one that is framed by innumerable childhood experiences across the street from the church. For many years, my grandmother rented a large apartment above what was then Harleston-Boags Funeral Home. 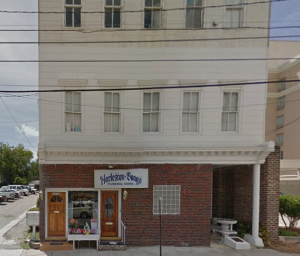 Harleston Funeral Home was established in 1901 by two brothers, Robert Harleston (1846-1915) and “Captain” Edwin G. Harleston (1854-1931), and moved to its location at 121 Calhoun Street in 1913 where it was run by Captain and his son Edwin A. Harleston (1882-1931)[4] until their deaths. Harleston and later Harleston-Boags (1978) was among the first funeral homes exclusively for black residents in Charleston.[5] I did not learn until much later on in my life that the funeral home was a historically significant place for African Americans. I still do not know how my grandmother ended up in an apartment on top of a funeral home, but as a child it terrified me. Looking back, it is no wonder that I have spent many years writing about relationships between the living in the dead, as my experience, memories, and dreams while sleeping and playing above Harleston-Boags left a deep, remarkable imprint upon me.

For many years, then, my grandmother’s address—121 Calhoun Street—placed us almost directly across the street from Emanuel AME, which is located at 110 Calhoun Street. I experienced Grandma Phyllis as an overly mean woman who made us do chores and fussed all the time about things that we were not supposed to touch. The apartment was very long. A hallway separated the main residential space containing the television room, my grandmother’s bedroom, her bathroom, and the dining room from the kitchen. Rather than allowing us to sleep in the main part of the apartment during our lengthy visits, my brother and I were resigned to the less secure, small bedroom off of the kitchen. We had access to a second, separate bathroom in a hallway that ran the length of the entire apartment.

We did not get to spend a great deal of time in the front room to play or watch television, but when we did, the shadow cast by Emanuel’s pinnacle was ever-present. That room gave us the best view of its striking white façade, and we spent a great deal of time conjuring up stories about the people who moved in and outside of that church (and even more when grandma banned our television time). There were several times that we actually entered Emanuel AME, including Sundays. More than those memories is what Emanuel AME symbolized to me. Mother Emanuel AME Church provided solace for me as a child. It was the place that signaled a kind of hope of escape from my grandmother’s tyranny and from the sweltering, oppressive heat that threatened to consume us in the un-air conditioned apartment.

So while the idea that a twenty-one-year-old white man Dylann Roof would walk into a church and kill a group of black people is not exactly surprising to me (a cynicism that certainly reflects a history and the tenor of our current moment), but that the slaughter would occur on sacred, hallowed ground and in the manner that it reportedly took place—has left me stunned.

As the story of how Roof walked into Emanuel, a church whose white stone captivated my imagination for hours and hours, has been revealed, I find myself most vexed by his apparent profaning of the sacred, a place that summoned a new world. That he sat listening to the most sacred moments of exchange between an individual and her god, and still chose to kill nearly everyone in the room is an act of spiritual terror.

At the time of this writing, it has been reported that Roof has confessed to and has been charged with the murder of six women and three men in the basement of Emanuel AME Church. Roof allegedly desired “to start a race war,” a desire that is ironic considering that even a cursory glance at recent events in our country suggests that the purported war he desired has been, and continues to be, well under way.

My ears are not deaf to the ongoing resonance of the #blacklivesmatter refrain. Yet this incident is yet another painful reminder that there are no sacred spaces for black people beyond those we try to carve out for ourselves, and even then, the perceived threat of that creation may well be enough to drive others to kill us for it. The presumption that we can be “safe” is merely that—an unfounded, unsubstantiated belief—and a dangerous one to place any stock in. The irony of submitting this post on Juneteenth, the commemoration of the ending of slavery in the United States, is not lost on me.

I mournfully now submit an additional nine names to the ever-growing litany of dead black women and men whose lives were senselessly taken during recent acts violence:

and lastly, Reverend Sharonda Coleman-Singleton, 45, who was the mother to one of my nephews’ basketball teammates, and a speech therapist to my youngest nephew.

[2] See The Buried History of America’s Largest Slave Rebellion and the Man Who Led It by David Robertson (Alfred A. Knopf, 1999) and He Shall Go Out Free: The Lives of Denmark Vesey by Douglas R. Egerton (Rowman and Littlefield, 2004). Egerton’s article “The Long, Troubled History of Charleston’s Emanuel AME Church” on The New Republic is a poignant telling of the church’s significance (http://www.newrepublic.com/article/122070/long-troubled-history-charlestons-emanuel-ame-church). Kim Chow also succinctly captures Emanuel AME’s history in her recent post on NPR, “Denmark Vesey and the History of Charleston’s ‘Mother Emanuel’ Church. http://www.npr.org/sections/codeswitch/2015/06/18/415465656/denmark-vesey-and-the-history-of-charleston-s-mother-emanuel-church.

[4] Edwin A. Harleston was a local artist and activist who was also a founding member of the Charleston branch of the NAACP.

[5] The Harleston Funeral Home Papers are housed at the Avery Center for research in Black Culture at the College of Charleston. http://avery.cofc.edu/archives/Harleston_Funeral_Home.pdf. Accessed June 18, 2015.