I don’t often hear from my brother Maurice, but when I do, I realize within minutes of the conversation and his reassurance that all is well, I breathe an internal sigh of relief. The last time he called, it was earlier this month to talk to me about the death of #walterscott, and how community members were reacting to the incident. My brother was noticeably irritated, which is quite unusual for such a laid back guy. But it made sense to me: Walter Scott was shot and killed a mere twenty minutes from his home. And not only was the community fired up about the fact that he was shot and killed by a white police officer, they were also wondering why the second officer on the scene—a black officer—seemed so lackadaisical in his attending to Mr. Scott’s body. My brother lamented how he must have the same, repeated talk with my teenage nephews, who are both biracial, but read as black. “So what do you tell them?” I asked. And he unsurprisingly told me how, like those featured in Geeta Gandbhir’s and Blair Foster’s OpDoc, have ‘the conversation.’[1] “I tell them what Daddy told me,” he said: “Be respectful, follow instructions, no sudden movements, no backtalk, and don’t ever run.” I then asked, “But did you tell them that might not matter, that they still might be shot down, brutalized, or killed nonetheless?” My brother said, “No, I don’t tell them that.” “Well why not?” I interrogated. “Because they see every day that it doesn’t matter, with all these black folk getting killed.”

Having a serious moment with Reece (as we call him) is a big deal. He’s the quintessential big brother, always mocking me at every moment. We continue to talk as we haven’t before, my brother and I, about the ways the world seems to hate black people, and in those moments, a similarity between us becomes crystal clear: we worry for our black sons, we share an anxiety, a fear even, about what the world will do to them. 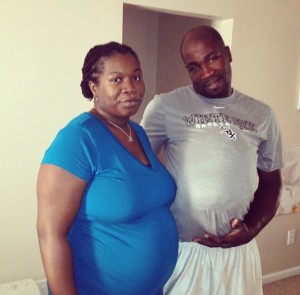 My brother Reece playfully pokes fun at me—even while pregnant—July 2013.[2]

I now live in a small town where everyone almost knows everyone—much like the one where I grew up—and that makes me worry even more, for my son and my husband. I wake up in the mornings, go through my news and gossip circuits—Twitter, The New York Times, TMZ, CNN, BBC, Bossip—and read with baited breath, waiting for the news of another black body senselessly discarded.

I am of the mindset that life teaches us lessons and that what gets repeated, or is cyclical, is a reminder of the lesson we didn’t learn or the story we didn’t quite comprehend. That’s the historian in me. Yet I cannot help but continually wonder: what lessons have we missed? Until we grapple with the past, it will continue to haunt us, and we will be forced to reconcile how the histories of anti-black racism have joined us in the present.

My internalized lament last week was followed up by externalized ruminations. This weekend, my department collectively reflected on the importance of the legacy of activism, the ‘virtual’ and ‘real’, the ‘past’ and the ‘present.’ We could not help but notice during our symposium how parsing out those distinctions feels even more difficult now. To us, having students of Africana Studies equipped to understand the significance of movements of our past and their relationship to our present is a no-brainer. We agreed that we cannot sit silently, nor can we simply stand aside as black bodies continue to end up missing, continue to pile up, or continue to be choked or shot while unarmed.

And yet, even as I am hopeful about what our work—in Africana Studies, in my brother’s home, in my own—might do to ensure that not another black life is carelessly snatched, I sit, yet again, with baited breath. The anxiety I feel is not quite what Professor Christen Smith describes in her beautiful love note to her black son, but it’s an angst nonetheless, a haunting feeling that all is not quite right. So as I sit and wait, I act. I take Professor Smith’s charge for a protective, yet transparent love, and I raise it ten fold.

[2] Personal photograph, permission of use granted by James Manigault-Bryant.

Comments on “Finding My Brother’s Keeper”