loading...
By Kevin C. Quin March 19, 2018 Comments Off on Race, Gender, and Sexuality in Miami’s History

Palm trees, ocean breezes, and avenues bursting with glowing neon signs are just a few of the things that comes to mind when most people think of Miami. Located on Florida’s southern coast, Miami remains one of the most popular tourist destinations as the city attracts millions of visitors and gains billions of dollars in revenue each year. Upon arrival to Miami, newcomers will undoubtedly be dazzled by the city’s busy yet relaxed lifestyle, pristine white-sanded beaches, and vibrant nightlife scene.

Such positive reactions to the city’s social and cultural landscape, however, have not always been ubiquitous throughout Miami’s history. While the elite class flocked to the city to indulge in paradise and live out fantasy, Black working-class migrants from the Caribbean often held the view that Miami was more of a nightmare than a recreational playground. As economically privileged tourists were drawn to what promoters described as an exotic getaway, the city’s “outsiders,” who were Black migrants from the Caribbean, also played a significant role in shaping Miami’s tourism industry alongside the city’s reputation as an international metropolis from the 1890s to 1940.

In Welcome to Fairyland: Queer Miami Before 1940, historian Julio Capó Jr. unearths the forgotten history of how competing visions for the early city paved particular spaces for queer women and men from throughout the United States and abroad. By highlighting the influence Black migrants, laborers, and sex workers had on the city’s development as an urban frontier, Welcome to Fairyland reveals how gender and sexuality shaped constructions of class, race, and ethnicity by recovering the queer voices, lives, and experiences of Miami’s past. Additionally, the book examines how Black working-class migrants shaped not only the material construction of Miami, but also how perceived notions of gender and sexual difference served as a marketing tool to promote the city while simultaneously exposing Black migrants to state-sanctioned violence.

Capó Jr.’s inquiry into Miami’s queer past begins in the 1890s, during which the city was incorporated as a proper municipality, and concludes by 1940. While Miami is positioned as the center of analysis, Capó Jr. broadens traditional understandings of the city’s geographic boundaries by emphasizing transnational influences on the city’s formation. Capó Jr. is just as attentive to key events taking place within the unstable boundaries of early 20th century Miami as he is to related developments happening in the Caribbean, Cuba, and the U.S. border. By framing the term queer as a tool of analysis, which underscores the lived experiences of those marked as different from the dominant white middle class, Welcome to Fairyland expands the urban scope of Miami to understand how normative expressions of gender and sexuality were constructed in opposition to historical actors who subverted these expressions. 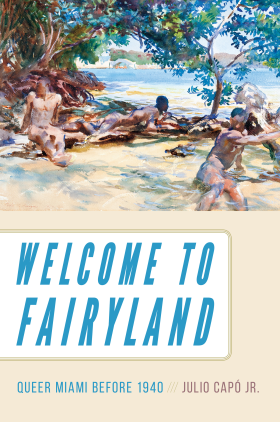 Welcome to Fairyland follows a chronological plan that advances Capó Jr.’s claim that gender and sexuality significantly impacted Miami’s social, cultural, and urban landscape. The book’s beginning chapters traces Miami’s queer origins by illuminating the role of seasonal migrants from the Caribbean, such as Black Bahamians, in creating the city’s sex and vice districts during the early 20th century. The book’s beginning chapters also examine how Miami’s boosters played upon racial and sexual difference to stage the city as a “Fairyland” that allowed elite white tourists to transgress gender and sexual norms within the confines of the city. Additional attention to gender is given in the book’s middle chapters as Capó Jr. explores how white middle-class women’s bodies in particular gave rise to normative heterosexuality. The remaining chapters focus on efforts by local and transnational influences to tame the city’s reputation as an untamed “Fairyland” during the 1930s.

Departing from the traditional method of studying community formation in queer history, Capó Jr. instead stresses the role of the individual and social trends that shaped Miami. Whereas other urban histories stabilize the nation-state and empire-state as the central framework for understanding social relations in cities, Capó Jr. shifts Miami’s urban history outward to explore power relations embedded in other forms of exchange including tourism, capital, trade, and knowledge production. In decentering the nation-state, however, Capó Jr. remains attentive the ways empire persistently informed everyday people’s experiences and relationships in Miami.

Viewing Miami’s urban history through a queer lens makes visible the important role of gender and sexual difference in the city’s development. Capó Jr. illustrates this point by drawing from a rich archive of immigration logs, commission reports, medical files, arrest records, and judicial hearings. In addition, Welcome to Fairyland considers other modes of production, such as poetry, paintings, and staged sketches as equally important to “official” sources in constructing narratives of Miami’s queer past. Capó Jr.’s inclusion of cultural artifacts alongside city records allows him to draw from an expansive array of sources to construct a more convincing account of the multiple ways gender and sexuality influenced not only local politics but also ideas of queerness in the white imaginary.

For example, Chapter Two underscores how the perceived hypermasculinity and hypersexuality of Bahamian male laborers shaped ideas of racial and sexual difference in the eyes of Miami’s white upper-and-middle class residents. In this chapter, Capó Jr. illustrates how the influx of mostly young, Black male migrants from the Bahamas to Miami gave rise to a homosocial world in which these laborers often engaged in intimate, and sometimes sexual, ways. Evidence of these same-sex encounters is documented through police records that demonstrate how Black Bahamians were frequent targets for the enforcement of sodomy laws and crimes against nature. In addition to being targeted by police, Black Bahamians were also the object of Miami’s white elite gaze as white residents fetishized the physique of the male laborers. Through Capó Jr.’s close readings of watercolor paintings that eroticized the Black male Bahamian’s body, and short stories written by white authors that emphasized the perceived unmatched strength of the laborers, it becomes clear that racial, gender and sexual difference between the Bahamian laborers and white residents shaped the city’s understanding of queer desires and behaviors.

As Welcome to Fairyland engages in the fields of gay and lesbian studies, transnational history, urban history, and tourism studies, Capó Jr.’s work reminds us of the critical queer genealogies in urban history that have been forgotten. An overarching strength of the book is Capó Jr.’s interdisciplinary approach to the book’s archive and method to explore the interconnectedness of gender, class, race, and sexuality in relation to the physical construction of Miami. Welcome to Fairyland grapples with important questions such as under what historical circumstances norms get shaped, bifurcated, and become hegemonic. Capó Jr.’s work is an extraordinary contribution that offers innovative ways for understanding the role of gender and sexuality in shaping the social, cultural, and urban landscape of Miami.

Kevin C. Quin is a PhD student in Africana Studies at Cornell University. His research interests include African American Gay and Lesbian history, culture, and politics. Follow him on Twitter @kevincquin.