Editor’s note: In honor of LGBTQ History Month, this week we’re revisiting pieces published on Black queer history, thought, and/or culture. Today, we turn to C. Riley Snorton’s response to the roundtable on his book, Black on Both Sides: A Racial History of Trans Identity. Click here to view the other contributions to this roundtable.

A few weeks ago, on Sunday, October 21, 2018, the New York Times published an article under the headline, “’Transgender’ Could Be Defined Out of Existence Under Trump Administration.” A leaked memo from the Department of Health and Human Services argued that

“key government agencies needed to adopt an explicit and uniform definition of gender as determined ‘on a biological basis that is clear, grounded in science, objective and administrable.’ The agency’s proposed definition would define sex as either male or female, unchangeable, and determined by the genitals that a person is born with…Any dispute about one’s sex would have to be clarified using genetic testing.”

According to the New York Times, “the new definition would essentially eradicate federal recognition for the estimated 1.4 million Americans who have opted to recognize themselves—surgically or otherwise—as a gender other than the one they were born into.” Within hours of the article’s release, #wontbeerased began to circulate on social media. By Monday trans activists and their supporters protested and marched in Washington, D.C., New York, Los Angeles, and in other cities across the U.S., and a number of response pieces, op-eds, and critiques have and continue to emerge.

To be clear: the state cannot rhetorically define anyone out of existence. Trans people existed before state recognition, trans people live by avoiding state recognition, and trans people’s survival has often been in spite of, and often in opposition to, the state. And the grounds on which this definition of gender is proposed, i.e. biology, has never been objective. These are all lessons I have learned while researching and writing Black on Both Sides. But this latest federal proposal to “define transgender out of existence” will intensify the relationship between transness and premature death for the most vulnerable—in prisons, hospitals, schools, detention centers, and homeless shelters.

Since the publication of Black on Both Sides I have worked to disentangle myself as the author from the circulation and reception of the book. This has become less easy in recent weeks, but I still insist that the book should have a life of its own. Encountering these generous readings and critiques provides a unique opportunity to make a different relation to the book again and to my interlocutors: Stallings, Escalante, Zellars, Greene-Hayes, Nash, and Capo, Jr. 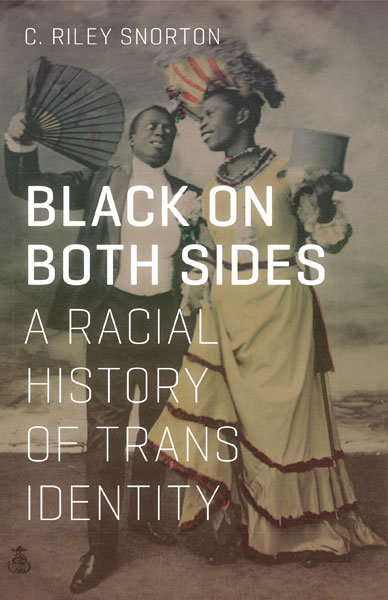 Black on Both Sides takes as its archive an eclectic collection of materials, including late nineteenth-century sexological texts, plantation medical records, fugitive slave narratives, Afro-modernist literary productions, documentary films, and mid-twentieth century journalistic accounts of Black trans people to demonstrate how race figures prominently in the development of the category of transgender. In viewing the interplay of blackness and transness as transitive, which in the grammatical sense refers to an expression of action that requires a direct object to complete its sense of meaning, but also as it refers to the quality of “passing into another condition, changeable, changeful; passing away, transient, transitory,” this study begins by tracing the circulation of “Black” and “trans” as associated signs, as they are brought into the same frame by the various ways they have been constituted as fungible, which is to say thingified and interchangeable within the logics of transatlantic exchange (OED). As the first two chapters explore in greater depth, the fungibility of chattel persons produced a critical context for conceptualizing transness, generating understandings of sex and gender as subject to revision in the arenas of medicine and law.

In the third chapter, “Reading the Trans- in Transatlantic Literature: On the Female within the Three Negro Classics,” I bring Hortense Spillers’s noted essay, “Mama’s Baby, Papa’s Maybe: An American Grammar Book” to bear on Booker T. Washington’s Up from Slavery, W.E.B. Du Bois’s The Souls of Black Folk, and James Weldon Johnson’s Autobiography of an Ex-Colored Man. The patriarchal impulses that would structure a desire to be modern, as a tenet of manhood rights, necessitated a symbolic rearrangement of Black women’s figurations. Through this process, “black modernity” would indicate the ways Black gender is, as Christina Sharpe has articulated “anagrammatical,” which is to say, open to rearrangement. As the first two chapters of my book take up fungibility to express how Black women have been instrumentalized to create understandings of being and non-being in the arenas of science and law, this chapter explores how Black manhood would articulate itself around a symbolic order established through and upon Black female flesh—“ungendered.” The association between being Black and having a Black mother was critical to maintaining the biopolitical ordering of slavery and continued as a question for consideration and redefinition through and in the wake of Reconstruction. In light of this interrelation, one could rearticulate the problem of the color line in terms of reproduction, such that one substitutes the question of what it feels to be a problem with what it means to have a Black mother. This metonymic move—which is also a play on how the logics of synecdoche and substitution structure the racial real in Afro-modernist literature—organizes the third chapter of Black on Both Sides along a series of routes into the “‘female within” the Three Negro Classics.

Chapters one through three enact an argument about how transness animates blackness, figuring one part of a doubly negated relation as it bears upon the articulation and experience of Black life. In chapters four and five, I attend to the other part of this negated relation in an exploration of the ways blackness animates transness, particularly as it pertains to the project of twentieth-century trans historiography in my discussions of Christine Jorgensen, described as America’s first transsexual celebrity, and Brandon Teena, frequently dubbed the nation’s first trans martyr.

My hopes when writing this project were deeply tethered to my feelings of profound gratitude to Black feminist theory, and particularly for the work of Hortense Spillers. Her attention to grammar in “Mama’s Baby, Papa’s Maybe” inflects my use of transitive as a way of thinking about the conditions of possibility for ontological transformation. But it was the follow-up interview, published in tandem with the essay’s tenth year of circulation, entitled “Whatcha Gonna Do?,” that opened a frame for thinking about the stakes of Black on Both Sides, to generate a vocabulary—which is not to say that there wasn’t already an abundance of language, but that it became a way to direct the impulse to set forward a history—that is not so much a history but a theory (if theory is the praxis of naming ways of living) that could engender lifeworlds of the damned. That interview takes as its referent Peter Tosh’s 1976 reggae tune, “Whatcha Gonna Do?,” in which the chorus reiteratively asks, “Oh mama, watcha gonna do, oh mama, whatcha gonna do now?” in response to the scene of the narrator’s father’s captivity. It also became the refrain I heard when writing that bears some relation to the final lines of Sylvia Wynters’s essay-cum-open letter, “No Humans Involved,” when she concluded: “The buck stops with us.” The eloquent and insightful responses included in this roundtable underscore how this is a collective function.

C. Riley Snorton is Professor of English Language and Literature and in residence at the Center for Gender and Sexuality Studies at the University of Chicago. He is the author of Nobody Is Supposed to Know: Black Sexuality on the Down Low (University of Minnesota Press, 2014) and Black on Both Sides: A Racial History of Trans Identity (University of Minnesota Press, 2017), winner of the Lambda Literary Award for Transgender Nonfiction and an American Library Association Stonewall Honor Book in Nonfiction. Snorton’s next monograph, Mud: Ecologies of Racial Meaning, examines the constitutive presence of swamps to racial practices and formations in the Americas. Follow him on Twitter @CRileySnorton.