In 1950, the scholar-activist Pauli Murray published an important book titled States’ Laws on Race and Color. Sponsored by the Women’s Division of Christian Service of the Methodist Church, this 746-page volume was a compilation of race-based laws from every state in America. The book included not just segregation laws but rather any law pertaining to race at all, including those that protected civil rights. The statutes compiled ranged from segregation laws in Alabama to Minnesota’s 1857 law banning “slavery” or “involuntary servitude in the state otherwise than the punishment of crime.”1

Murray’s book was published during a time when civil rights attorneys were engaged in an epic struggle to dismantle Jim Crow through the federal court system. Like many Black attorneys, Murray, who had graduated first in the Howard University Law Class of 1944, was particularly interested in a legal pathway to overturn the 1896 decision Plessy v. Ferguson, which upheld racial segregation with the doctrine of “separate but equal,” despite the “the equal protection of the laws” protected by the Fourteenth Amendment. During the 1930s and 1940s, Black attorneys had won victories in the cases of Missouri ex rel. Gaines v. Canada (1938) and Sipuel v. Board of Regents (1948). When Murray finished States’ Laws on Race and Color in 1950, the NAACP Legal Defense Fund was just a few months away from additional victories in Sweatt v. Painter (1950) and McLaurin v. Oklahoma State Regents (1950). In hindsight, the organization was well on its way toward overturning Plessy v. Ferguson by attacking segregated public education.2

States’ Laws on Race and Color was published to provide attorneys and scholars with a reference of race laws that also helped expose the absurd and pervasive nature of Jim Crow. State-based racial segregation laws were incredibly inconvenient, irregular, and, most importantly, unconstitutional. Murray’s book used the indexes of state legislatures to identify and publish laws that could be challenged by the small but potent number of Black civil rights attorneys fighting to reveal the unconstitutionality of Jim Crow-era racial segregation.

Murray’s contemporaries were excited about the publication of States’ Laws on Race and Color. Thurgood Marshall was known to have called it the “bible” of the Civil Rights Movement because its usefulness for activist attorneys mired in the fight for civil rights. Morehouse College President Dr. Benjamin E. Mays asserted that the book “Should be read by all Negroes.” Political scientist John A. Davis praised the publication as “the most comprehensive, detailed and current compilation in her field of study.” Even more prudently, Davis recognized the implications of studying these laws. “Should the members of the Supreme Court read Miss Murray’s book,” he argued, “no one of them could repeat the position of the Court in the old case of Plessy v. Ferguson that segregation is not a badge of inferiority.” The year after penning this praise, Davis became the lead scholar for the NAACP Legal Defense Fund’s school desegregation case that would culminate in Brown v. Board (1954).3

Murray was correct in noting the expansive and invasive nature of Jim Crow laws. Their sheer scope, as Murray acknowledged, led to omissions in States’ Laws on Race and Color. It was simply impossible for a researcher in the 1940s to read every single law passed by each state, as “would be necessary,” Murray wrote, “to prevent such omissions.”

But today’s machines can do just that: reading hundreds of thousands of laws to identify those pertaining to race. Seventy years and many civil rights victories later, a team of librarians and historians at the University of North Carolina at Chapel Hill have devised a way to complete a portion of Murray’s task. 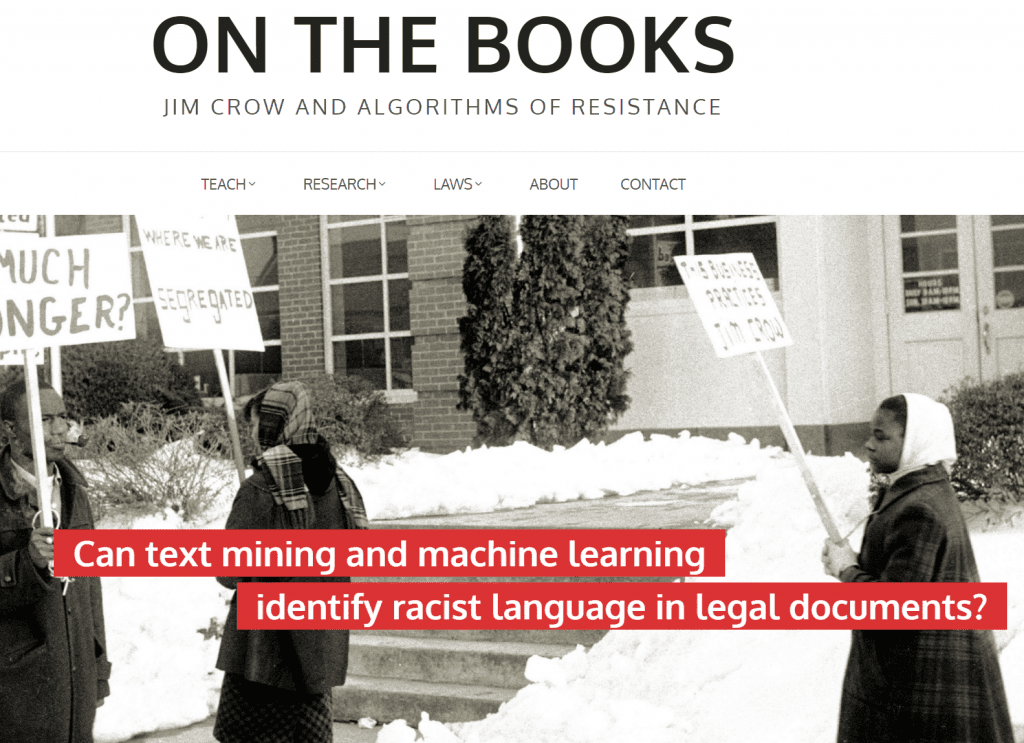 On the Books: Jim Crow and Algorithms of Resistance is the first and most complete collection of all Jim Crow laws from a single American state. As much as historians have learned about Jim Crow, it has previously been impossible to fully catalogue all Jim Crow laws from a single state because there were just so many. This new collection is the product of a machine learning exercise. Over the past two years, a team of researchers have used optical character recognition to create a text corpus of all North Carolina laws enacted by the state legislature between 1866-1967, parsed out the individual laws, and used an algorithm to identify the laws likely to be Jim Crow laws. The algorithm was trained based on laws identified by experts as either Jim Crow or not Jim Crow (including some of the laws identified Pauli Murray). Over 900 race-based statutes were identified as potential Jim Crow laws. This believed to be the most complete collection of Jim Crow laws from a single state ever assembled.

Inspired by Murray, this project offers a new and compelling way to study the history of Jim Crow. As Murray knew, Jim Crow laws were extraordinarily expansive, dictating minute details of public and private life that went well beyond the most obvious forms of racial segregation in public spaces. Jim Crow itself was a poisonous, invasive social order of racial apartheid, carefully crafted over decades by white supremacist legislators.

On the Books: Jim Crow and Algorithms of Resistance makes available the entire corpus of North Carolina’s Jim Crow laws. It is innovative as a resource as well as a methodology. The site includes an overview of Jim Crow, as well as an explanation detailing the process of creating this remarkable tool, whose implications could help inform other groups of researchers, attorneys, and scholars. Jim Crow ended, but laws designed to target certain racial groups still exist. Many of these can root their origins to the original Jim Crow laws of the nineteenth century. This site also includes lessons and teaching materials developed in tandem with Carolina K-12 that are designed to help teachers and students who might want to use this resource in their classrooms.

It is the hope of this team that this melding of Library Science, History, and Digital Humanities can provide a novel resource that is useful for scholars and teachers in a variety of disciplines. Ideally, the team at On the Books hopes to help members of American society gain a better understanding of the history of race in the United States in order to empower future generations to build on the legacy of scholar-activists like Pauli Murray.

William Sturkey is an associate professor in the Department of History at the University of North Carolina at Chapel Hill. He is the author of 'Hattiesburg: An American City in Black and White'(Harvard University Press, 2019) and co-editor of 'To Write in the Light of Freedom: The Newspapers of the 1964 Mississippi Freedom Schools' (University Press of Mississippi, 2015). Follow him on Twitter @william_sturkey.