In today’s post, blogger Ahmad Greene-Hayes interviews Nicole Myers Turner about her new book, Soul Liberty: The Evolution of Black Religious Politics in Postemancipation Virginia (University of North Carolina Press, 2020). Dr. Turner is an Assistant Professor of Religious Studies at Yale University. Her research focuses on Black religion, politics, and constructions of manhood and womanhood and is situated at the intersections of African American Religious History, Africana Studies and Black Digital Humanities. Follow her on Twitter @NicoMyTurn.

Ahmad Greene-Hayes: Considering the significance of the digital humanities to Black Studies, how do you situate your work in these discourses as a historian of African American religion during the nineteenth century?

Nicole Myers Turner: Scholarship at the intersection of Black Studies and digital humanities (DH) is burgeoning. Recent works, conferences and projects provide firm and fertile ground for continued growth. Take for example, Kim Gallon’s insightful essay on Black digital humanities as being rooted in the project of recovering Black people’s stories and in the critique of racism, and the Mark Anthony Neal and Jessica Marie Johnson coedited issue of The Black Scholar :Black Code (2017) that illuminated the ways that Black Studies transforms the digital. Add to these the spaces where scholars working on these intersections gather which was most powerfully exemplified in the conference “Intentionally Digital, Intentionally Black”–organized by the African American History, Culture and Digital Humanities Initiative at the University of Maryland College Park–and projects and spaces, such as Black Perspectives, that exemplify the fruits of these interventions. I see more growth in this area.

My own work intersects with these discourses about Black studies and DH because of my grounding in Africana Studies methods of centering Black people’s lives. It exemplifies the critique because I am oriented toward justice and being sensitive to the needs and issues that affect Black people. I extend the conversation by centering Black people’s knowledge production—using the church and convention minutes of Black Christians in post-emancipation Virginia to challenge frameworks in mapping that tend to work against inclusion and flexibility and to erase or circumscribe Black people and their possibilities. By centering Black people, by viewing the landscape through the eyes of Black religious people, my project demonstrates some of what knowledge production at the intersection of Black Studies and digital humanities can look like.

My book exists in three versions, a regular print version, an e-book, and an open-access e-book with enhancements. This third version allows me to present the maps of Black church networks and election returns and to make the representation more interactive than just a printed map. I also have a companion website, Mapping Black Religion, that is built to expand on the arguments about mapping by demonstrating the ways the maps can be remade when Black Christian people’s views orient the map. Eventually, the site will include more interactive elements that allow the viewer to manipulate and query the map, further breaking down the idea of maps as fixed representations.

Greene-Hayes: In Soul Liberty, women make their presence known in the political life of Black churches. For instance, there’s Mother Howard, Sister Rodney, and Fanny Myers. How do you conceptualize your book’s contributions to African American women’s religious historiography? 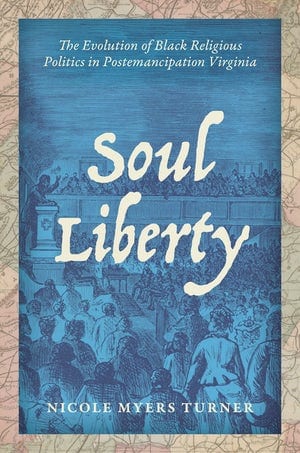 Turner: I stand on the scholarship that has documented the ways Black women have carved out spaces for themselves in religious and political organizations. Works that influenced my perspective include the writings of  Elsa Barkley Brown, Mary Frances Berry, Anthea Butler, Betty Collier-Thomas, Glenda Gilmore, Evelyn Brooks-Higginbotham, Martha Jones, Adele Logan, Rosalyn Terborg-Penn, Judith Weisenfeld, and more. And in light of these works, I felt the need to uncover the spaces and places were Black women were active in Black communities.

I also thought there was a need to uncover and expose the processes by which women had to carve out spaces of power and leadership for themselves–whether it was in the woman convention, benevolent society or outside in organizations like sanitation committees and the YWCA. The book aims to illuminate the moments where decisions were made that determined what roles Black women and men’s roles would be. Some of those happened outside of churches like when the Freedmen’s Bureau intervened in labor conflicts between employers and freedpeople over their worship practices. In these instances, Bureau agents undermined Black women’s church leadership because they wanted to quell potential labor unrest that was bubbling up alongside the emergence of these new worship communities.  The Freedmen’s Bureau agents invoked legal requirements for licensing to dissuade these women from leading their communities. In this case,  external forces—a federal agent’s intervention—moved the community away from women’s leadership, thereby contributing to the gendering of the ministry as male. The decisions made about disciplining men and women in cases of unwed pregnancy is another moment where decisions have gendered consequences.

By discussing these instances of decision making, I aimed to point out the processes of gender formation.  This study explains why women needed spaces of their own and the context in which they labored.

Greene-Hayes: You also focus on the political Black minister and the significance of theological education in the formation of Black church political participation. As a result of this, you discuss how Black male ministers used their positions within the family and the church for patriarchal purposes, such that theological education “became a de facto kind of gender training for black men” (105). Can you say more about the consequences of this “gender training” in the postemancipation period?

Turner: The book documents the ways that theological education–initially only offered to Black men—became a way that Black men are able to lay claim to some of the rights and privileges of leadership that resonated in the political landscape of emancipation. Black men were educated and ordained into leadership roles in Black churches and predominantly white churches and that put them on the same footing as white ministers and white leadership. This was an important development because theological education was not readily available to women, thus gendered ministerial leadership as male.

This was striking because Black women held ministerial and other leadership roles in these religious communities, as the examples of Sister Rodney and Mother Howard suggest, but then once theological education was denied to women, ministerial leadership was gendered male–effectively gendered training.

Anna Julia Cooper’s reflection on her experiences of education and how some of the advanced classes and language classes were not readily offered to her offers an instructive example. She was allowed to take classes on a provisional or exceptional basis but those courses were not traditionally offered to women. She bristled at the ways that men were catered to in theological training—their tuitions subsidized by the churches—while she had to pay her way through school.  In an interesting turnabout, though, it was Black ministers who went on to advocate for advanced education opportunities for Black women. The result was the formation of Hartshorne Memorial College. So, on the one hand, that theological education offered to Black men, gendered leadership as male, and the political stature this gendered training afforded also placed men in the position of protector and advocate for women.  Theological education produced exclusion and leadership that reinforced the gendered paradigm at the end of the nineteenth century.

Greene-Hayes: You also show how the church meeting (separate from church worship) was the place where democratic values, polity, and structure were cultivated to demonstrate “black political fitness.” You also note that in some churches, women were not allowed to participate “in the democratic processes of church governance.” What did “democracy” mean to the Black Protestants in your book, just decades after slavery?

Turner: When I use the term democratic, it’s “small d” democratic, meaning people were able to participate.  It dovetails with formations of church spaces as public spheres as open discourse and a place where people are able to form political community. The ways that the conventions and churches operated and organized through democratic processes that facilitated participation.  These gatherings were also democratic in the sense that everyone had a role—but not necessarily that everyone had the opportunity to occupy every leadership role.

The democratic process produced uneven results.  The concept of soul liberty opens the door for understanding how.  Soul liberty was a capacious idea that could be expressed in a variety of ways.  The pursuit of religious freedom, equity and justice could look different depending on where one was sitting. So if the conventions were sites where Black people made the case that they were ready for political participation because of the ways they carried out democratic processes, they were also spaces where women did not have access to every potential role. And even as Black people participated in electoral process during the Readjuster movement, they eventually differed over whether to continue working in the biracial political coalition. Some believed that it was important to remain affiliated with the movement because they did not have enough of a voting majority to advance policies that effected their freedom.  Others believed it was more important for Black people to be able to hold the highest levels of office—also freedom—and if the party wasn’t going to support them then they had to strike out on their own.  So, the churches were democratic in process—in the methods of participation—but this did not assure inclusion or access for everyone and it did not determine the political party alliances they would support.