loading...
By Sasha Turner May 18, 2018 Comments Off on Memory and the Largest Slave Auction in American History

The Weeping Time: Memory and the Largest Slave Auction in American History opens up with a list of chattel—the names of Black men and women of various ages. So frequent were their occurrence in the first chapter that almost every other page ends with a group of slaves, auctioned together on March 2 and 3, 1859. At first glance, it seems a strategic editorial move, drawing the readers’ visual and emotive attention to the moveable and exploited Black bodies that punctuated those fateful days in March. It is hard to read on. Upon further reflection, it is clear that historian Anne C. Bailey uses these lists to reveal the harsh realities of slavery: these matter-of-fact bundles of chattel punctuate the chapter because this was precisely how those days in March 1859 unfolded. As the clock ticked, bid callers and criers shouted chattel number, age, and laboring ability; and buyers hurled insults and fondled the flesh of their intending purchase. Despite weeping, pleadings, and negotiations, sellers hurried bundle after bundle, enslaved Black bodies of all ages and sizes, from block to buyer under the same command, “SOLD!”

Contrasting some recent works on slavery that, critically and importantly, engage a numbers game and put forth various theories that capture, grapple with, and explain the logic of racial slavery, The Weeping Time, graphically yet sensitively illustrates the socio-economic practice and human toll of slavery. A microanalysis of the largest slave auction in the history of the United States, The Weeping Time is a gripping odyssey into the individual human lives of the enslaved whose worlds were destroyed “with one stroke of the gravel” (4). Tracking the negotiated sale of enslaved Black people belonging to the Butler plantations, this study is a thoughtful illustration of what it meant to turn human beings into commodity and serves as an illuminating companion when grappling such theories as social death, chattel principle, and flesh.

Over the course of three sections and nine brief chapters, Bailey’s book narrates the intertwining lives of slaves, master, and mistress at Butler plantations in the Georgia Sea Islands in the decade prior to the outbreak of the Civil War. Relying on both print and manuscript records, including slave narratives from the Federal Writers’ Project and Butler Plantation Papers, the book reveals that the intimate world and political turmoil of the slave owning family were defining factors in the enslaved person’s precarious and debilitating existence. For it was the financial mismanagement, gambling debts, and a bitter divorce that forced the decision to sell wholesale the slaves who had lived on the properties for almost their entire lives. Because Butler was unusual among Southern plantations, in the sense that they rarely sold their slaves on the open market, it was not uncommon for Butler’s enslaved people to have forbearers of at least a few generations buried or living on the property. “None of Butler slaves have ever been sold,” recounted the New York Tribune reporter Mortimer “Doesticks” Thomson. Thomson’s pamphlets, a key primary source the book uses to narrate the auction, noted that these slaves  “have been on these two plantations since they were born. Here they have lived…here their parents lived before them, and are now resting in quiet graves…but all the clinging ties that bound them…were torn asunder…and scattered to the four winds” (115).

The sale of Butler’s 436 men, women, and children, including 30 babies, after several generations of living, loving, and dying becomes a poignant example of the chattel principle. Chattel principle, explained the fugitive slave, James W.C. Pennington is the vulnerability, imminent separation, and destruction of the life of even the most privileged, elite, and beloved slave. Faith in masters’ goodwill was as solid as building on quicksand; for the enslaved stood to have their family, community, and social ties ripped apart with a single game of poker, defaulted bank loan, or the choice of a new bride. In the case of Butler’s slaves it was their master’s stock market gamble and the economic downturn of 1857 that brought them to the auction block. 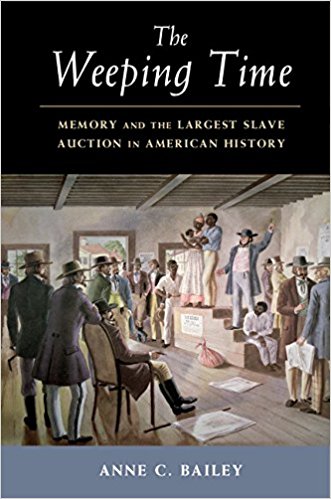 In a manner befitting the book’s interest in memory, and the implications of the past for the present and future, Bailey traces African echoes in the music, healing, spiritual, and agricultural skills of the enslaved at Butler. A general sketch of how the community of enslaved people brought African roots to their healing practices and how enslaved people used African rhythms to punctuate their daily toil in the rice and cotton fields is important to adding contours and richness to the lives of supposedly moveable chattel property. Here Bailey not only continues scholarly contemplation of how captive Africans brought “a pinch” of their homeland with them, but her analysis of enslaved Africans’ cultural continuity further illustrates that the enslaved were “More Than Hands.” The cultural practices, ancestral memories, and family life of the enslaved were important counterpoints and social retorts to the auction block reductionism where the labor and reproductive potential of slaves determined their worth.

By including Fanny Kemble Butler – the plantation mistress – as an important figure to understand the route of Butler’s slaves from the plantation to the auction block, Bailey’s work makes an urgent call for critical intersectional analyses of gender, slavery, and abolition. Like the enslaved, Fanny, an English transplant to America, brought with her the aspirations and cultural ideals of her homeland. Foremost among those ideals was the myth that the English were “naturally prejudiced against slavery” (55). It was these ideals, Bailey explains, that broke down her marriage to a slave-owner and staunch defender of slavery. Outlining the long history of British involvement in the trading and enslavement of Africans, Bailey rightly challenges Fanny’s inaccurate antislavery claims about her native England. While Fanny may not have denied the humanity of slaves to the degree that her husband did, her antislavery sentiments did not emerge from a core conviction in African humanity and their right to freedom and equality. Her support for abolition was based on a mythical national identity and a claim to Britain’s supposed moral superiority, civility, and white benevolence defined by what Bailey called a “fragmented past,” which concealed British role in slavery and the slave trade.

Bailey rightly insists that Fanny failed to grasp the enormity of the problem of slavery and that masters, mistresses, and slaves, had “linked fates.” Comparing British historical amnesia of which Butler is a supposed “victim” with the traumatic fragmented past of captive Africans, however, poses a series of problems. Unlike the enslaved, Fanny traveled freely to and across America as a famed Shakespearean actor and made return trips to England with her family. African captives were violently and involuntarily alienated from their homes. And, as the Butler auction reveals, even when enslaved people remade semblances of their worlds, they remained vulnerable to disruption, dislocation, and destruction. Additionally, white women’s unequal status to men, who blamed enslaved Black women for their husband’s indiscretions because “they little recourse in confronting their husbands” did not flatten America’s race and gender hierarchy, as Bailey suggests. Although white women were not treated as white men’s equal, their whiteness privileged them to hold and wield power over the enslaved and free Blacks within households, on the plantations, and American society at large.

The Weeping Time takes readers on an emotional journey. The reader knows initially that the Butler slaves are sold and families are separated; but we don’t know their fate in its entirety. The reader also knows that there are some reunions, but we don’t know the form of those reunions. Like the slaves sold, the critical reader must also wade through the long and bloody Civil War, and resist the urge to fast forward to the next chapters where we learn the fate of the separated. But the discussion of the Civil War along with the final breakdown in the Butler’s marriage is necessary, and as written by Bailey, evocative. In addition to zoning in on how the war unfolded on St. Simon Island, the site of Butler’s Hampton Estate, Bailey draws attention to how ironic it was that so many were “fighting so hard for freedom – the freedom to enslave others” (98). The events at St. Simon Island were pivotal in issuing Sherman Field Order No. 15, which granted land to the formerly enslaved from the Low Country Southern region, the site of Butler plantations. Of course, the Order was rescinded with the assassination of President Lincoln and installation of Andrew Johnson as the succeeding president.

Despite the importance of land as a source of stability and economic independence post slavery, individuals from the Butler plantations prioritized reconnecting with loved ones. Bailey’s work therefore confirms earlier conclusions that rebuilding community was as important as securing material well-being. But the most significant contribution of The Weeping Time is the personal reunion stories and journeys of those formerly enslaved at Butler. From the posting of advertisements to the adaptation of the Butler name, the newly freed went to various lengths to restore severed ties. The journey into the past to retrieve broken family links did not end with Reconstruction, Bailey explains, because most searches were unsuccessful. The use of DNA tests and genealogy searches today are telling of ongoing attempts to restore family and memory.

The Weeping Time is a potent reminder of individual lives dissolved and forever stained by slavery. Bailey’s book fittingly ends with a final chapter that follows the difficult journey of descendants seeking to restore the breach and coming to terms with identifying family members sold on the auction block. While one stroke of the gravel sought to deny the humanity of Black people deemed no more than bundles of chattel, it was earnest and determined quest of these people to remake these kinship ties that were shattered but far from being destroyed.

Sasha Turner is Associate Professor of History at Johns Hopkins University. She is the author of Contested Bodies: Pregnancy, Childrearing, and Slavery in Jamaica (University of Pennsylvania Press, 2017). Follow her on Twitter @drsashaturner.