loading...
By J. T. Roane May 19, 2018 Comments Off on Ontological Terror: A New Book on Blackness, Nihilism, and Emancipation

This post is part of our blog series that announces the publication of selected new books in African American History and African Diaspora Studies. Ontological Terror: Blackness, Nihilism, and Emancipation was recently published by the Duke University Press.

The author of Ontological Terror is Calvin Warren, an Assistant Professor in the Women, Gender, and Sexuality Studies department at Emory University. He received his B.A. in Rhetoric/Philosophy (College Scholar) from Cornell University and his MA and Ph.D. in African American/American Studies from Yale University. Warren’s research interests are in the area of Continental Philosophy (particularly post-Heideggerian and nihilistic philosophy), Lacanian psychoanalysis, queer theory, Black Philosophy, Afro-pessimism, and theology. Ontological Terror: Blackness, Nihilism, and Emancipation is his first book. He is currently working on a second project Onticide: Essays on Black Nihilism and Sexuality, which unravels the metaphysical foundations of black sexuality and argues for a rethinking of sexuality without the human, sexual difference, or coherent bodies. He has published articles in various journals, including CR: New Centennial Review, GLQ, TSQ, and Nineteenth Century Context. 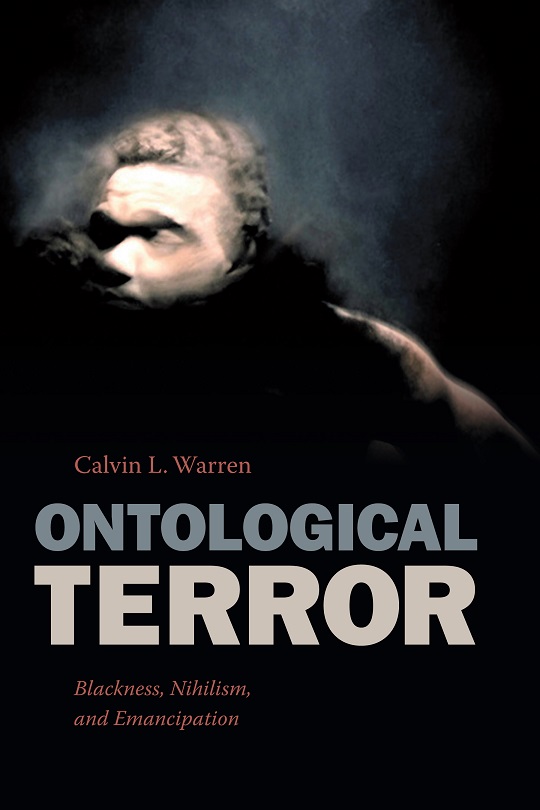 In Ontological Terror Calvin L. Warren intervenes in Afro-pessimism, Heideggerian metaphysics, and black humanist philosophy by positing that the “Negro question” is intimately imbricated with questions of Being. Warren uses the figure of the antebellum free black as a philosophical paradigm for thinking through the tensions between blackness and Being. He illustrates how blacks embody a metaphysical nothing. This nothingness serves as a destabilizing presence and force as well as that which whiteness defines itself against.

Thus, the function of blackness as giving form to nothing presents a terrifying problem for whites: they need blacks to affirm their existence, even as they despise the nothingness they represent.  By pointing out how all humanism is based on investing blackness with nonbeing—a logic which reproduces antiblack violence and precludes any realization of equality, justice, and recognition for blacks—Warren urges the removal of the human from its metaphysical pedestal and the exploration of ways of existing that are not predicated on a grounding in being.

In this careful and cogent account of the metaphysical structures of antiblack violence, Calvin L. Warren introduces a much-needed philosophical intervention in the claims and propositions of Afro-pessimism. His superb intellectual skills and beautiful philosophizing make this magnificent work important to a whole generation of scholars.” — Denise Ferreira da Silva, author of Toward a Global Idea of Race

J.T. Roane: What type of impact do you hope your work has on the existing literature in Black studies? Where do you think the field is headed and why?

Calvin Warren: In my conclusion, I call for an “ontological revolution.” By this, I mean a destruction of the humanist presumptions of agency, freedom, humanity, and equality which structure black aspirations, political hope, and moral virtue. If my book has any impact, I hope it is to commence this destructive procedure–one designed to unravel all the unreliable fantasies of black humanism. This romance with metaphysics–its logic, schematization, calculation, and objectification–continues to cause great disappointment, misery, pain, and intellectual poverty within Black studies. How long will our field remain faithful to a political ontology (theology) endorsing freedom, humanity, and equality in an anti-black world? Despite the growing number of mutilated, violated, and dead black bodies littering the political field, Black studies still remains hopeful that anti-blackness can be reasoned with, debated with, charmed, and defeated. I hope to unsettle this presumption and open the field to the abyss of nothing, the unique burden of black existence.

Young students and activists are holding Black studies accountable for providing a philosophical/theoretical frame for our existence. Black humanism and metaphysical romance (the dominate philosophical frameworks in Black studies) are no longer convincing. I think the field will begin to take black nihilism seriously because of student unrest and exhaustion. Simply telling our students to “keep hope alive” and “re-imagine humanity and reclaim your agency” is not fulfilling the hunger for an adequate response to anti-blackness.