Elwood David Watson’s Keepin’ It Real: Essays on Race in Contemporary America is a collection of essays analyzing tumultuous racial politics in America over the past decade. Watson covers a range of topics such as the Obama’s tenure in the White House, white supremacy, and homophobia in the Black community. There are 41 chapters, not including the introduction, which have been divided into four thematic parts. Part I, “The Politics of Whitelash,” includes essays critiquing white supremacy, white hypocrisy in response to white violence and Black activism, as well as providing ample examples of white backlash in American socio-political spaces. Part II, “Staying Woke!” covers topics that are often considered taboo in Black communities in the U.S., i.e., homophobia, mental health, and self-hatred. Part III, “Physical and Psychological Violence Against Black Bodies,” is self-explanatory. Watson provides historical examples of violence against Black bodies and its effects on the Black social, spiritual, and emotional consciousness. Lastly, Part IV, “Soulful Reflections on Entertainment Icons and Celebrities,” critiques celebrities, Black and white, to show the “Often complex politics of popular culture.”

What I enjoyed most about Keepin’ It Real was its short essay format. None of the essays carry on past six pages, with most ranging between three to five. Watson manages to keep the chapters short without producing critiques that are underdeveloped. There is no condescension or superfluous exposition in this book. Watson knows his audience and seems confident in their ability to engage in the conversations that he constructed. Even in its easy-going, conversational tone, Watson’s background as an educator is evident. Watson takes care to contextualize the essays focus on contemporary issues by situating them historically. For example, in the introductory chapter, Watson discusses James Baldwin’s infamous The Fire Next Time. He notes that this was the book that propelled Baldwin’s career forward as an essayist. The book examined the growing misunderstanding between Negros (the language used at the time) and white Americans around the issue of race. The book was published more than 50 years ago, but Baldwin’s examinations have remained relevant. Watson writes that there is around a 30% difference in the recognition of racial disparity between Black and White American’s (in 2018), with many whites not acknowledging the issues that Black Americans face. That call to memory sets the tone for what the reader should expect in the upcoming chapters. 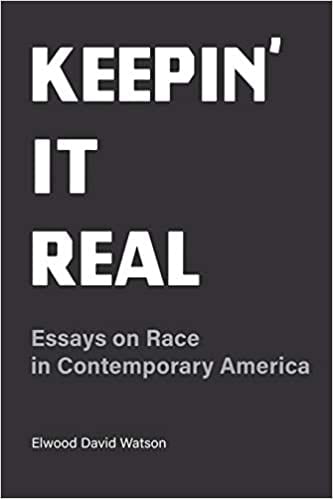 As a reader, Watson’s callback to Baldwin reminds me of the Adinkra concept of Sankofa. Sankofa is a concept that can be symbolized multiple ways. The most popular of which being a bird reaching towards its back to grab and carry forth a precious egg. The egg is typically a metaphor for lost or important nuggets of knowledge. In Keepin’ It Real, what Watson is “carrying forth” has not been lost to Black Americans. It is knowledge that is often actively diminished and ignored but is vital to conversations around ending anti-Black racism. That is the central underpinning of Watson’s examinations. He is asking, in his analysis of American socio-political perspectives, what are the conversations that we must continue to have? Why are there such stark incongruences around what issues have been rectified and what issues have not? Watson does attempt to answer some of these questions, and many more, in his essays. In fact, I found myself resonating with quite a few of his concluding thoughts and suggestions.

One essay that comes to mind is chapter 11, “Authentically Black: The Debate Lives On.” In this chapter, Watson discusses how some folks in the Black community take it upon themselves to safeguard Blackness from others. He provides examples as to how some people will establish certain benchmarks for maintaining Blackness and how that often leads to the alienation of those who do not meet them. As a former Black nerd having attended predominantly white schools, this article resonated with me. I too have experienced being told that the way that I spoke made it seem as if I were, “acting white.” Keepin’ It Real works not only as a resource for these conversations, but as a reflection of them as well. That is not to say, however, that the text was without issues. There are two that I find particularly pressing.

First, there were times where I wanted Watson to be far more critical of certain people and issues. For example, were former President Barack Obama and former First Lady Michelle Obama often and cruelly the unfair targets of virulent racism and scapegoating? Absolutely. Did Obama implement policies that were extremely problematic around immigration, occupancy in the Near East, and surveillance? Absolutely. I would have loved an essay on how America’s first Black President failed many BIPOC’s and the implications of that. I also found myself on the opposite end of Watson’s critique in chapter 36 “Bill Maher, and the Nigger-Word Debate.” In this chapter, Watson discusses a segment of Real Time With Bill Maher where the host uses the N-word, in jest, to describe himself. While Watson is critical of Maher and the use of the word, for several reasons, he concludes the chapter by stating that there are other, more important issues. He cautions us, Black folks burdened with outrage, to not get sidetracked by these sorts of incidents. In general, I am not a fan of “there are other things to worry about” arguments. Black folks deal with racism and micro aggressions daily. We are not going to suddenly lose our ability navigate multiple issues. To quote many folks on Black Twitter, “I got time.”

Second, I expected contemporary essays on race to include essays on BIPOC’s who identify outside of a Black and White binary. Dr. Elwood David Watson is a professor of History, African American Studies, and Gender Studies at East Tennessee State University so I suspected that the book would emphasize the Black American experience. However, the books main claim was that the essays were going to discuss contemporary race issues in America. That claim then does not feel fully actualized when there is very little reference made to the pervasive xenophobia and anti-immigrant rhetoric that runs rampant in both Black and white communities. In fact, there is very little mention of Latinx, Indigenous, or Asian American’s made in the book at all. It is clear to me that the book was crafted with great attention to detail. However, that makes it all the more curious that Watson would not be more forthcoming that the book is hyper focused on racial issues as they pertain to Black people.

Overall, Keepin’ It Real did what it promised. The text never read as Watson mincing words. He set out to have a much-needed conversation about race issues in contemporary America. He swung the door open for us to enter the chat with him. The book was engaging, critical, and a fast read. Most importantly, it reinvigorated my wanting to discuss and theorize around some of the topics mentioned in the book. I could certainly see myself utilizing passages from this text both inside and outside of my own African American Studies classroom.

Omi McCadney is a Black Queer Femme educator, educational consultant, activist, artist, and freelance writer and editor. She received a B.A. in Political Science with a Minor in Leadership & Civic Engagement from the University of Nevada Las Vegas ("UNLV") in 2013. She also received an M.ED. in Curriculum & Instruction with an emphasis in Multicultural Education from UNLV in 2019. Follow them on Twitter @thenapturalone.