loading...
By Paul Hébert May 27, 2016 Comments Off on Fire in Babylon and The Racial Politics of West Indian Cricket 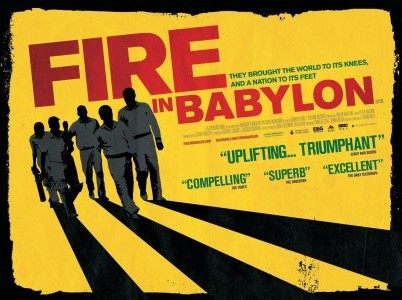 “What do they know of cricket who only cricket know?” asked C.L.R. James in Beyond a Boundary, his 1962 study of the cultural politics of cricket. James argues that it is impossible to understand cricket if one only pays attention to the action on the field and ignores the social and political contexts in which play unfolds because the way cricket is played reflects the values of cricketers and their society. “A particular generation of cricketers thinks in a certain way,” James writes, “and only a change in society … will change the prevailing style.”1

In the 1970s and 1980s, West Indian cricketers changed the “prevailing style” of their sport and dominated international competition with aggressive fast bowling, overpowering batting and graceful fielding. Fire in Babylon, Stevan Riley’s 2011 documentary about that team, shows how, in the first decades of West Indian independence, “a particular generation of cricketers” embodied the frustrations and aspirations of a people that had set out to overcome a history of racism and imperialism and make their mark on the world. In the words of bowler Michael Holding, West Indian cricketers’ quest for excellence spoke to “something more significant than just cricket”; it was “a matter of feeling of worth.”2 The Antiguan history teacher and Rastafari elder Frank I sees West Indian cricketers as setting out to “carry a message to the white world” by defeating racism “on the field of play,” “truly making the cricket field a level playing field.” The film examines how the West Indian cricket team set out to dominate its sport and became, as historian Hilary Beckles says, a “mouthpiece” for a people that wanted to “restore a dignity that was taken from them.”

Cricket played a central role in the expression of unified West Indian identity as the independence of individual nation-states and the failure of the Federation of the West Indies made regional political identity less relevant. As Michael Holding points out, international cricket is “the only thing [West Indians] do together.” Yet while West Indians may be divided by political geography, they are united in a shared history of slavery, racism, and imperialism and a shared desire to transcend that history. Independence brought about a shift in consciousness among West Indians. As Colin Croft says, his generation was “born in colonial times [and] grew up in independent times.” They “started thinking like West Indians, and not like Englishmen … living in the West Indies,” and wanted to “prove that [they had] emerged from being slaves.” Excellence at cricket was part of that process. Clive Lloyd, the captain who built and led the team, says he was guided by the principle “One People, One Nation, One Destiny,” a modified rendition of Marcus Garvey’s Universal Negro Improvement Association’s motto that hints at the larger stakes for which his team played.

As success in cricket allowed West Indians to express their emergence as an independent people, it also provided them with a way to protest the failure of their governments to secure the conditions for their economic well-being. Cricketers, by challenging their sport’s governing body over fair pay, contributed to critiques of the unfair economic conditions in the Caribbean and of elites who perpetuated the region’s dependent economic status. In 1977, Australian media magnate Kerry Packer founded an international cricket tournament independent of the established boards. World Series Cricket paid players a more equitable share of the income they generated, which appealed to cricketers who were unfairly compensated by the West Indian Cricket Board. As Vivian Richards notes, given the success of the team, “there should have been more benefits coming” to players who were among the lowest-paid in the game. In Riley’s telling, West Indian cricketers who played for Packer (their defiance earned them a ban from playing for the West Indies that was eventually overturned in the face of popular outrage) is a stand-in for West Indians venting their frustrations at politicians who failed to deliver on the promises of independence. As Richards argues, by standing up against an authority that perpetuated unfair economic practices and securing a better deal for themselves, West Indian players did something that “[their] politicians could not achieve” and gave a degree of hope to the West Indian people.

Fire in Babylon sets political independence and the challenges that the West Indian people faced after decolonization as part of a transnational Black liberation struggle. Hilary Beckles calls decolonization part of a global civil rights movement, unfolding in conversation with Black liberation movements in North America, Britain and Africa. Richards, speaking over stock images of Martin Luther King, police brutality against African-American civil rights protesters, and Tommie Smith and John Carlos raising their fists at the 1968 Olympics looks back at a time when West Indians felt the need to “start getting up and standing up because of the things that were happening worldwide.” West Indian cricket became a forum for challenges to white supremacy and (neo-)colonialism not only in the Caribbean, but worldwide.

The transnational politics of cricket come into play in segments addressing West Indian tours of England, where West Indian victory was all the more sweet when it took place in front of crowds of West Indian migrants. West Indian migrants in Great Britain used cricket to make a statement against the racism they encountered in their adopted home. Using newsreel footage about the racism directed at the Windrush generation and subsequent arrivals from the West Indies, Riley frames England as a place where, as bowler Andy Roberts puts it, West Indians “struggled more … than anywhere else.” The West Indies’ 1976 tour of England began with Tony Grieg, the English captain and a white South African who declared that his side would make the West Indians “grovel.” His statement revealed how cricket intersected with racial politics. Not only was the West Indian side fired up by Grieg’s comment, they were aware that their compatriots living in the UK needed “something to hold onto,” as Gordon Greenidge says. Grieg’s comment combined with the intense support from the West Indians in the crowd inspired the West Indies to dominance. Eight years later, the West Indies swept host England, inspiring a variation on cricket terminology that put Black pride into cricket parlance: a “whitewash” denotes a sweep of a Test series; when the West Indies accomplished that feat against England in 1984 (which reggae superstar Bunny Wailer likens to “slaves whipping the asses of masters”), the term “blackwash” was coined.

Riley also addresses cricket’s role in global Black struggles by examining West Indian cricketers’ resistance to—and tragic support of—apartheid with a segment on one of the most infamous moments in cricketing history–the “rebel tours” hosted by South Africa. In the 1980s, South Africa circumvented its ban on participation in international sport by inviting cricketers from the rest of the world to compete in the apartheid state. Several West Indian players took up the offer, tempted by a substantial payment and the assurance that they would be treated as “honorary whites” during their stay, even though defying the boycott meant a lifetime ban from playing for the West Indies. Colin Croft defends his decision to play in South Africa, arguing that there was no difference between his defying the West Indian Cricket Board by playing for Packer and playing in South Africa. He insisted that cricket is how he made his living, and he simply took up an opportunity to earn decent money at his trade.

As one of the greatest batsmen of his era, Richards was a “target” for South Africa; had he accepted an offer to play, many more of his team-mates would have joined him, which would have doomed West Indian cricket. But Richards–who wore red, gold and green sweatbands on the field as a symbolic representation of African identity and solidarity with Africa–declined “an open cheque” from South Africa, a decision the film likens to Muhammad Ali’s refusal to submit to the draft during the Vietnam War. Richards is obviously moved when he recounts learning from Desmond Tutu that Nelson Mandela and other anti-apartheid activists were grateful to him and the other West Indians who declined to play in South Africa for “helping to dismantle the apartheid regime.”3

Although Fire in Babylon never mentions C.L.R. James’s contributions to cricket scholarship, the film is deeply influenced by his framing of West Indian cricket as something with deep political meaning. While cricket is a mystery to most Americans, the film does not ask the viewer to have any knowledge of the sport. By introducing a number of the core political issues facing West Indians in the post-independence era in an accessible and engaging way, the film makes excellent material for college courses in Black Studies, Caribbean history, or the politics of sport.