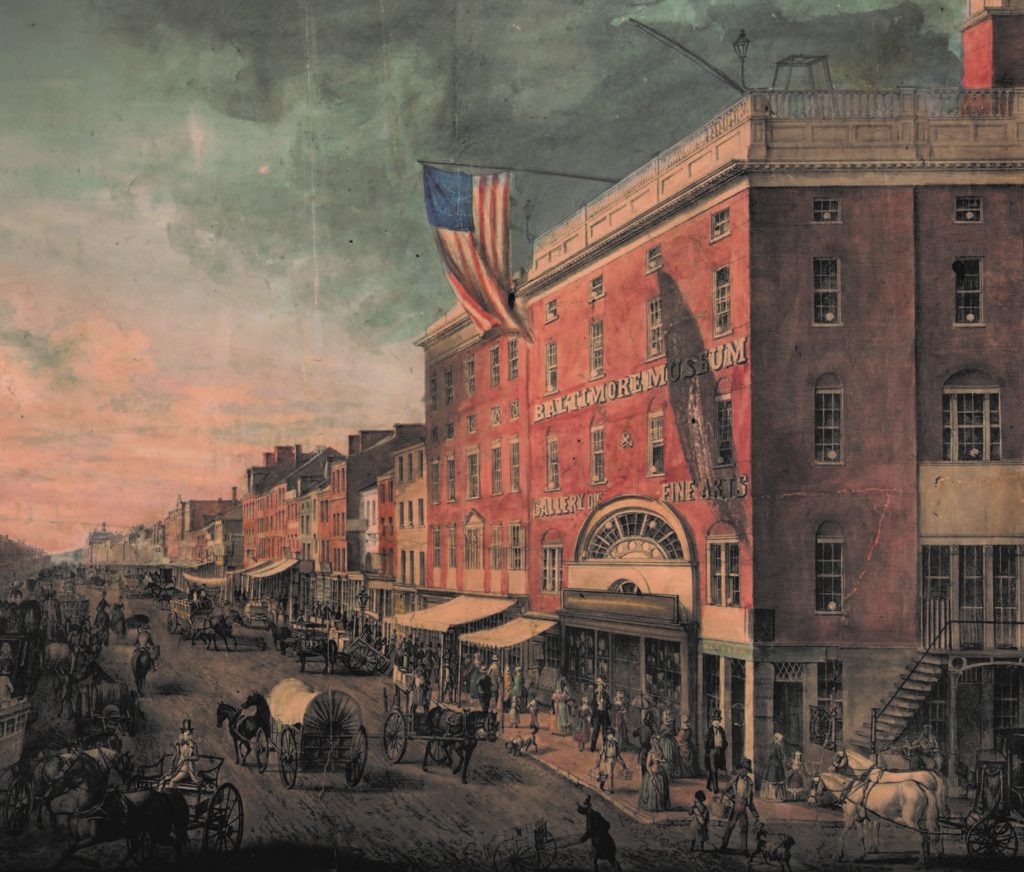 Throughout my life, I have grappled with the precarious and vulnerable nature of Black life in the United States and throughout the African Diaspora. In my suburban Orlando high school, I was hit over the head with the benevolence of America, yet, when I came home to my family, and I listened to the stories of my elders and of the ancestors, I came to know a different America. That is, the America where Black citizenship has never been protected, yet always demanded, ostensibly remaining illusive. Whether through scenes of slavery, subjection, Jane and Jim Crow, or the most recent events of Black bodies in public spaces being dubbed fugitive, I am always reminded that whatever occurs in our time, has a historical foundation embedded in the uniqueness of the moment.

In Birthright Citizens: A History of Race and Rights in Antebellum America. acclaimed historian Martha S. Jones reconsiders the historical foundations of the embattled nature of Black citizenship. Jones further expands the scholarship on early African American history by recovering the voices and actions of African Americans who saw themselves as American because of their birth. Jones provides a clear understanding of why the history of African Americans rights in the United States was not just about constant struggle for recognition, but rooted in proving the actuality of their rights as citizens. Some important questions focus on the agency of Black Baltimoreans. While Baltimore felt the tentacles of slavery in the antebellum period, the nation’s largest free Black American population proved extremely influential in the legal, social, and religious traditions of the city. What Black Baltimore showed, and is Jones’ strongest contribution, is how decades before Supreme Court Justice Roger Taney (from Baltimore) legally struck down Black claims to citizenship in the Dred Scott decision, and before the birthright citizenship standard was written into the Fourteenth Amendment, Black Baltimoreans had already developed and performed the concept of birthright citizenship through their use of legal culture.

To construct her argument about how birthright citizenship was integral to Black Baltimoreans’ sense of belonging, Jones’ thematically approaches her topic, which allows her work to be more structured as she moves mostly in a chronological order as well. One of the many strengths of the text is its seamless flow and readability. Jones weaves intricate stories of how antebellum Black Baltimoreans understood themselves as citizens through their citizen performances as abolitionists, clergy and church worshippers, and litigants in the courts of the city, drawing from an archival base of various newspaper, judicial, government, and pamphlet sources. Jones includes countless examples of African Americans in Baltimore using their written and auditory voices to proclaim that no matter the circumstance, by being birthed in the United States, they were entitled to the rights of the nation. By tapping into local Black print culture, legal records, maritime histories, church records, and the lives of runaway slaves who escaped through the city of Baltimore like Frederick Douglass, Jones strongly furthers her point that Baltimore was the location where the concept of birthright citizenship and dilemmas of free Black life in America were representative of the nation’s problems as well as the local.

One of the themes Jones highlights throughout her text is largely how the threats of removal pushed Black Baltimoreans to act on behalf of their citizenship. The strongest contributor to this threat was the colonization movement. From its beginning in the late 1810s, the movement was meant to remove those of African descent from the country they were born in. Baltimore, and its populous Black community, starkly represented the threat that free Blacks provided to the slaveholding nation. Birthright Citizens illustrates how in the 1820s, the threat of Black removal converged with the developing sense of Black belonging in the nation. Although colonization was largely a white American push against the possibility of interracial democracy, the threat of removal did not emanate exclusively from whites. Jones also shows how at times the freedom possibilities emanating from Haiti and the free Black populations in Canada converged in the emigration movement to create debate as to whether Black folks should hold onto their lives in the United States or leave. Whether voluntary or forced, Black activists in Baltimore used their written and oratorical voices to show that they belonged in the United States and were not going to leave without a fight. 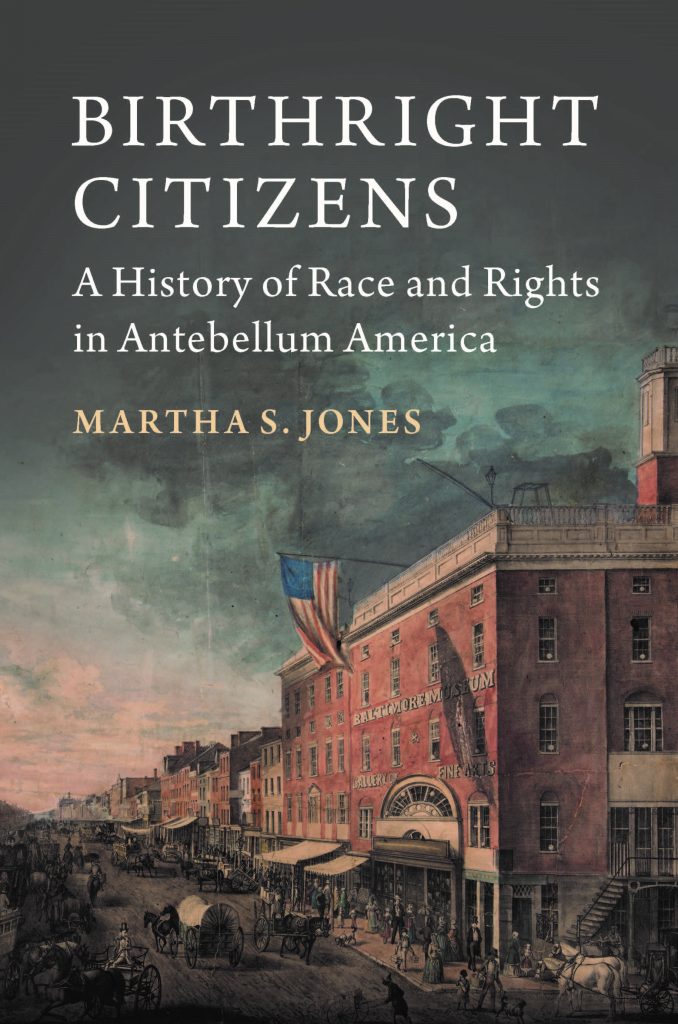 Churches and courtrooms were the arenas at which Black activists of the city fought for and expressed their yearnings for citizenship most. Jones shows how Black churches modeled their doctrines and bureaucratic structures on already developed American legal forms. An example of this is in the case of Zion Church, where in “1842 the congregation’s leaders set out the terms of its governance, interweaving the requirements of Methodist church law with the state’s statutory requirements” (74). Church institutions wanted recognition of their rights of incorporation, and modeled their bureaucracy on local and state templates to gain access to spaces to freely worship. When Black Baltimoreans broke away from white church congregations, they performed their nature of respectability to people who probably did not deem them as equals in society. Negative thoughts of African Americans did not stop them from using their physical church locations to highlight to white Baltimoreans of their community aspirations for respect. On Sundays “the sight of African American worshipers making their way along Baltimore’s streets told a story that white churchgoers could not help but notice” (73). White church members were forced to see Black dignity in motion in spaces that they may not have deemed appropriate.

African Americans also waged important legal battles in the church as well. Through “intimate relations that led to the births of children, antislavery politics that led to the sheltering of fugitives” which made their way into the various law buildings, African Americans had a major presence in Baltimore courtrooms because their forms of activism required it (67). As the mainstream abolitionist movement began in earnest in the late 1820s and the early 1830s with the publication of America’s first Black newspaper, Freedom’s Journal, the church was not only the most important place of community building, but also where many meetings surrounding the abolitionist movement were held. Jones powerfully shows the foundation of the legal acumen of Baltimore’s Black community came through the networks developed by the African American press, which was a key arm of the abolitionist movement’s structure. Birthright Citizens rightly privileges the relationship between Black land ownership with churches and citizenship.

Throughout my reading of Birthright Citizens, as I pondered Jones’ emphasis on Baltimore as the important place in pre-Civil War America where birthright citizenship was already flourishing as a personal standard of Black citizenship, the words of Baltimore’s Roger Taney, Chief Justice of the United States during the 1850s loomed large over me. Regular readers of Black Perspectives will probably recall Justice Taney’s statement “Blacks have zero rights that the white man has to recognize” quite well. His statement, though contradicted within the next decade following the Union’s victory during the Civil War, is still a powerful statement which confers upon present-day Black Americans the historic nature of the precariousness of Black citizenship. What Jones shows in her final chapter is though Black Americans may have been denied citizenship rights nationally, state courts, like Mississippi ironically, along with Maryland, offered opportunities to use the legal system to their advantage, even if on very individual bases. This occurred when the Mississippi court, while hearing a case from a free African American claiming his rights as an heir was told, though Dred Scott established African Americans as inferior to whites, the case did not “go the next step and deem them without standing to pursue their claims in the State of Mississippi” (135). Ultimately, Jones’ final chapter demonstrates how state courts throughout the nation in the aftermath of the Dred Scott decision did not always listen to the higher federal Supreme Court’s decision-making. There was hope for African-Americans, like those of Baltimore, to use the courts to make better worlds for themselves, despite whatever opposition they faced.

Birthright Citizens is a game-changing text in the study of Black citizenship, rights, and legal history. The text evokes for me the question of whether, in cities with comparable free Black American populations of the period like Washington D.C., Philadelphia, New York City, or Boston, the story of birthright citizenship could also be seen within the fabric of those communities as well? Jones also contributes in telling the story of how Black Baltimoreans sat, and in historical perspective, still sit at important crossroads in African-American life. Whether through the fight for citizenship rights in the 1830s or through uprisings after the murder of Freddie Gray, Black Baltimoreans have been at the center of protests for rights for well over a century and a half. Martha Jones powerfully buttresses my adolescent thoughts that Black Americans were never given anything but danger in America. Told through the stories of Black Baltimoreans and their allies, I learned more why Frederick Douglass, someone heavily influenced by Baltimore, once said “power concedes nothing without a demand.” His words still hold true today.

Comments on “Black Rights and Black Citizenship in Antebellum Baltimore”